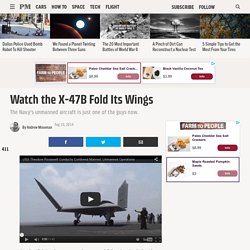 But before that happens, drones will have to live alongside manned planes as the Pentagon integrates autonomous aircraft into the fleets. It's already begun. This weekend the U.S. Navy released footage of the X-47B unmanned aircraft taking off and landing on the USS Theodore Roosevelt. This supersized drone will fly you to work (or anywhere) The 184 doesn't just look like a drone; it acts like one. 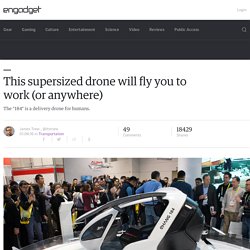 Passengers will only have minimal controls: take off, pause flight and land. The drone's autonomous flight controls do the rest. Autos - Meet Transwheel, self-balancing parcel-delivery drone. The use of flying drones, for all their well-documented virtues (amazing aerial photography, for one), is a fraught topic. 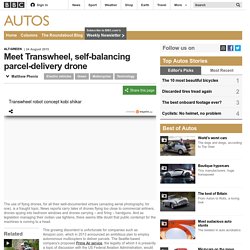 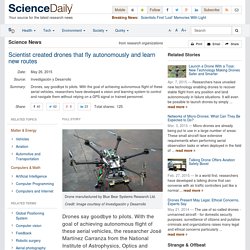 UAE dangles US$1 million in prize money to encourage Drones For Good. The word "drone" is synonymous with autonomous military aircraft that hail down death and destruction from on high. 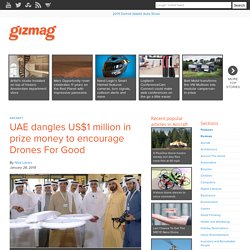 But the United Arab Emirates (UAE) is looking to highlight the humanitarian potential of the technology with its Drones For Good competition. Vampire bat-inspired drone can fly and crawl. Robot drones that can both fly and move about on land would vastly improve their usefulness by increasing the areas in which they could operate. 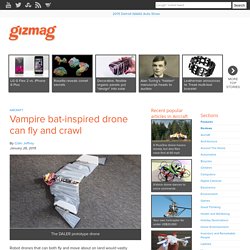 Adding wheels of sufficient size to handle most terrains, however, would adversely increase both the weight and size of such a drone. Researchers at the Swiss Federal Institute of Technology in Lausanne (EPFL), building on their earlier developments, have created a drone that uses wings incorporating movable tips, allowing it to both walk and fly. Raw: Boeing Completes First Unmanned F16 Flight. 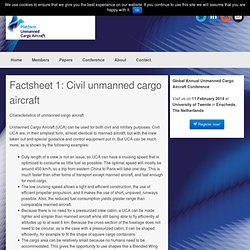 Civil UCA are, in their simplest form, almost identical to manned aircraft, but with the crew taken out and special guidance and control equipment put in. Scientists developing remote-control cyborg moths. Cargo UAS set to deliver. With the number of multi-rotor drone concepts competing for a narrow market share, you really need a unique selling point if you want to get your project off the ground. 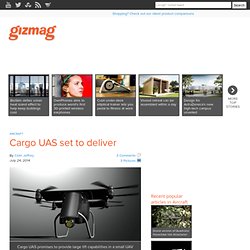 In the case of the developers of the Cargo Unmanned Air System (UAS), their point of difference is to claim a massive 60 kg (132 lb) lift capacity for their proof of concept, with the promise of an eventual production unmanned aerial vehicle that can carry payloads of up to 400 kg (880 lb) with automated "sense and avoid" capability. The UAS team envisage that items such as mail and parcels, food and water, or even medical supplies and emergency equipment could all be delivered more quickly and securely than is possible with ground transport. The aircraft's design includes basic landing skids for simplicity, whilst its open frame platform provides greater safety for ground crews to load and unload payloads from the rear of the vehicle.

Turning the Police State Inside Out. Filming Cops with a DJI Phantom 2 Drone! June 13, 2014 Tom Zebra is no stranger to filming the police. 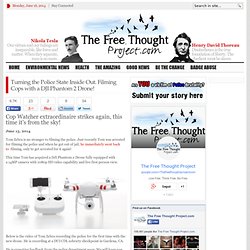 Just recently Tom was arrested for filming the police and when he got out of jail, he immediately went back to filming, only to get arrested for it again! Dassault achieves world's first formation flight of combat drone and manned aircraft. The formation flight lasted almost two hours Image Gallery (4 images) Dassault Aviation announced that last month it came a step closer to making science fiction reality when it conducted a formation flight of the nEUROn unmanned combat air vehicle (UCAV) with a Rafale fighter and a Falcon 7X business jet. 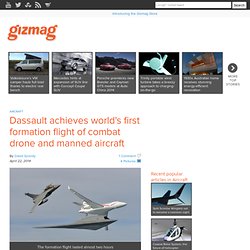 The flight off the coast of the south of France took place on March 20, and for almost two hours the nEUROn kept station with the other planes as they flew over the several hundred kilometers out over the Mediterranean. According to Dassault, this was the first time an unmanned combat aircraft achieved formation flight. Triton UAV completes initial flight testing. The MQ-4C Triton test aircraft makes its approach for landing March 13 at Palmdale, California, marking the conclusion of initial flight testing (Photo by Alan Radecki) Image Gallery (2 images) The Triton UAV's initial flight test program, which kicked off with the unmanned aircraft's first flight last May, has been completed. Now cleared to fly at various altitudes, speeds and weights, the Triton is on track to be introduced into the US Navy fleet in 2017.

Based on the Global Hawk UAV, the MQ-4C Triton is designed to carry a variety of intelligence, surveillance and reconnaissance (ISR) sensor payloads and will be used by the US Navy as an adjunct to the Boeing P-8 Poseidon maritime patrol aircraft. With a range of 2,000 nautical miles (2,300 miles/3,700 km), the Navy says the UAV will cover more than 2.7 million sq mi (6.9 million sq km) in a single mission.

A second test aircraft is now being prepared for flight, before both are ferried to Naval Air Station Patuxent River, Maryland. Details of successful first test flight of Taranis UCAV demonstrator revealed. The UK's Ministry of Defence (MoD) and BAE Systems this week announced details of last year's first test flight of the Taranis unmanned combat demonstrator aircraft, which BAE bills as the "most advanced aircraft ever built by British engineers. " The 15-minute test flight took place at an undisclosed location outside of the UK on August 10, 2013 as part of a project to show the UK’s ability to create a unmanned combat air vehicle (UCAV) capable of surveillance, targeting, intelligence gathering, deterrence, and strikes in hostile territory.

View all One of Britain’s most closely guarded military secrets, Taranis has been sheathed in secrecy from the start with access to it and its technology strictly limited. Even getting a good look at it has been difficult as BAE explains that many aspects of the craft’s technology, shape, design, and even finish, remain classified, as does any exact information on its performance.

The video below features the Taranis test flight. Source: BAE Systems. AirMule unmanned VTOL aircraft flies towards full mission demonstration. Nevada company launches silent Sky Sentinel UAV airship. The Sky Sentinel is a small UAV airship that can remain aloft for 18 hours and provide silent surveillance of a wide area at altitudes up to 10,000 feet (3,048 meters) Image Gallery (4 images) UAV’s, or Unmanned Aerial Vehicles, tend to face two issues – not being able to stay on station for long periods, and carrying enough of a payload to be useful.

Domino's DomiCopter takes pizza delivery airborne. Recently, aerial drones have been used to bless festival goers with strategically placed beer drops and burrito lovers with air-borne deliveries. Sticky spy UAV turns things upside down with ability to land on walls and ceilings. Researchers have developed a quadcopter that can attach to walls and ceilings with a dry adhesive before taking off again Image Gallery (2 images) Micro UAVs that have the ability to slip into tight spaces, including inside buildings, have wide ranging military and search and rescue applications. FAA grants Arlington Police Department permission to fly UAVs. Swedish engineers launch hackable mini-drone. The Crazyflie Nano Quadcopter (Photo: bitcraze.se) Three years ago, three friends started with a simple idea.

They would build a "flying circuit board," Marcus Eliasson said to NRK.no, the Norwegian Broadcasting Corporation's news website. X-47B completes first sea trials. TechJect’s Dragonfly micro UAV flies like a bird and hovers like an insect.