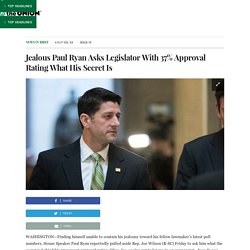 Joe Wilson (R-SC) Friday to ask him what the secret is behind his 37 percent approval rating. “Hey, Joe, you’ve got to let me in on your secret—how do you manage to pull in such incredible favorability numbers? Seriously, it’s insane,” asked Ryan, cornering his fellow legislator in a Capitol building hallway and offering him increased federal funds for his district in exchange for some insight into the congressman’s enviable popularity among more than a third of voters. “I can’t even imagine what it’s like for you, having nearly two in five people approve of your performance. God, that has to feel incredible. Colbert Slams Media For Giving Ryan's Lying Convention Speech a Pass. Paul Ryan’s abortion problem - Some Wisconsin Catholics are praying both Catholic vice presidential candidates will have a religious epiphany. 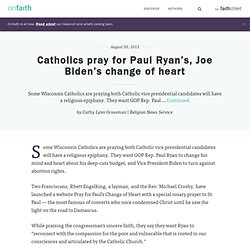 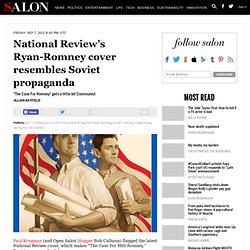 The Ryan Sinkhole. Paul Ryan Again Cites Voting for War as Foreign Policy Experience. Plouffe: Ryan Running from Defense Cuts Vote as Fast as His 'Fictitional Marathon' Paul Ryan: 'It Would Take Me Too Long' To Explain Mitt Romney's Tax Plan. WASHINGTON -- Republican vice presidential nominee Paul Ryan promised again on Sunday that Mitt Romney’s tax plan would bring lower tax rates for all Americans while remaining revenue-neutral, although he didn’t fully explain how it would accomplish that. 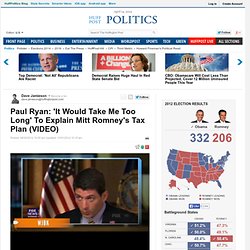 The Obama campaign has blasted the Romney-Ryan ticket for not providing details on how it would give Americans such large tax breaks without growing the deficit. Ryan reiterated in an interview on "Fox News Sunday" that the plan would drop taxpayers' bills by 20 percent without costing a dime, due to closed tax loopholes, but he was short on specifics when pressed by host Chris Wallace. “You haven’t given me the math,” Wallace said in one exchange. “I don’t have the ... Naked, Tied-Up Paul Ryan Tells Staff He Can’t Prepare For Debate Unless They Slap Him Harder.

DANVILLE, KY—Lying fully nude with his wrists and ankles tied to the corners of his hotel room bed, an intense, sweat-drenched Paul Ryan reportedly told his staffers today that the only way he could prepare for Thursday night’s vice presidential debate was if they slapped his naked, bound body harder and harder. 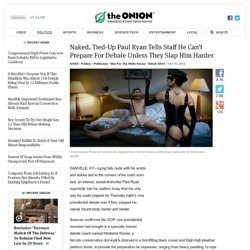 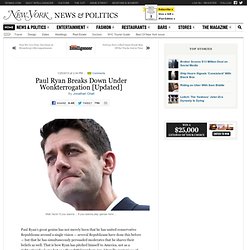 If you wanna ... if you wanna play games here ... Paul Ryan’s great genius has not merely been that he has united conservative Republicans around a single vision — several Republicans have done this before — but that he has simultaneously persuaded moderates that he shares their beliefs as well. That is how Ryan has pitched himself to America, not as a right-wing ideologue but as a thoughtful numbers guy. Literally every piece of evidence in Ryan’s career — from his formative infatuation with Ayn Rand to his indoctrination in the works of supply-siders to his mentorships under Jack Kemp and Sam Brownback to his entire voting record in public life — says that Ryan is a hard-core supply-sider whose overarching goal is to reduce tax rates on the rich, far more than it is to bring budget deficits to heel. Paul Ryan Gets John Boehner To Sign House Speaker Permission Slip. ‘Americans are terrified’: Jake Tapper makes Paul Ryan answer for wave pro-Trump hate crimes. Paul Ryan: Access to birth control for women is ‘nitty-gritty detail’ not worth talking about.

Paul Ryan Grudgingly Impressed By Angry Protester Who’s Matched His Running Pace For 9 Miles. WASHINGTON—Marveling at the outraged, shouting woman’s conditioning, House Speaker Paul Ryan told reporters Tuesday he could not help but be impressed by the infuriated protester who had been keeping up with his running pace for the last nine miles. 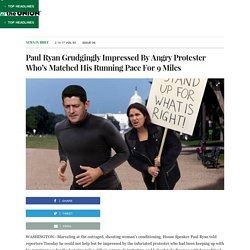 “She’s extremely irritating, and I absolutely disagree with her political views, but I’ve got to hand it to her for maintaining a consistent seven-minute mile this whole time,” said Ryan during a morning run around the Tidal Basin, adding that the woman’s stamina was particularly impressive considering she had sustained a steady chant of “Do your job!” Since she caught up with the Wisconsin Republican alongside the Jefferson Memorial more than an hour earlier.

“I honestly thought she would have lost steam on lap three and given up, but her endurance and aerobic capacity are absolutely incredible.