Interactive Map of Earth’s Asteroid and Meteor Impact Craters. Impact craters are caused when the planet is struck by solid objects travelling at high velocity, producing shock waves and the compression of material to form a circular crater. 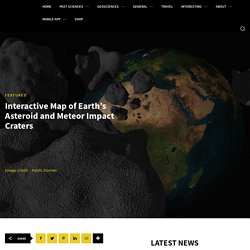 In impacts with large objects, material can be displaced and ejected to form a crater when significant volumes of excavated material from both the object and the body impacted is melted and vaporised. Across the history of our planet, around 190 terrestrial impact craters have been identified that still survive the Earth’s geological processes, with the most recent event occurring in 1947 at the Sikhote-Alin Mountains of south-eastern Russia. The largest of these events occurred at Vredefort in the present-day Free State province of South Africa, where an asteroid thought to have been approximately 10–15 km in diameter impacted the planet during the Paleoproterozoic Era around 2.023 billion years ago. Interactive Map of Earth’s Asteroid and Meteor Impact Craters – Zoom in on each event to view the impact crater.

'Mysterious Object' May Be First 'Extinct' Meteorite. A newly uncovered meteorite may be the first-ever "extinct" meteorite — a member of a class of meteorite that no longer falls to Earth. 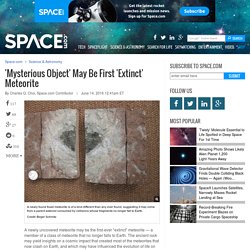 The ancient rock may yield insights on a cosmic impact that created most of the meteorites that now crash on Earth, and which may have influenced the evolution of life on Earth, researchers said. The most common meteorites on Earth, which make up about 85 percent of the rocks that fall onto this planet from space, are known as ordinary chondrites. Chondrites are made up of tiny round pellets known as chondrules, which form when molten mineral droplets quickly cool in space. These stony meteorites are thought to come from similarly rocky asteroids. [Photos: Rare Meteorite Found in Minnesota] Scientists Find Strong Evidence That the Earth Was Hit Head-On by a Mars-Sized Planet. The early solar system was, for lack of a better term, a chaotic hellscape. 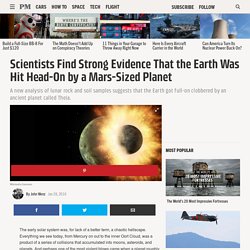 Everything we see today, from Mercury on out to the inner Oort Cloud, was a product of a series of collisions that accumulated into moons, asteroids, and planets. B612 Foundation highlights the risk of city-destroying asteroids. The California-based B612 Foundation has released a video displaying the distribution of 26 multi-kiloton asteroid impacts known to have struck the Earth since the year 2000. 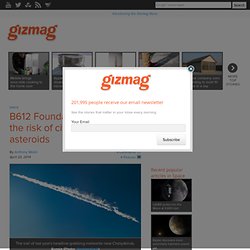 NASA: Meteor In Russia Threw Up Globe-Girdling Plume Of Debris : The Two-Way. The bus-sized meteor that slammed into Russia in February, causing a massive shock-wave and injuring hundreds of people, sent a plume of dust into the stratosphere that circled the globe in just four days and lingered for months, NASA says. 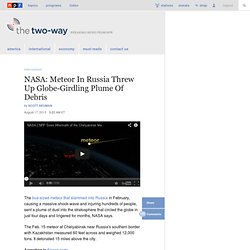 The Feb. 15 meteor at Chelyabinsk near Russia's southern border with Kazakhstan measured 60 feet across and weighed 12,000 tons. It detonated 15 miles above the city. According to Space.com: This Pulsing Earth : Krulwich Wonders... It's breathing, he thought. 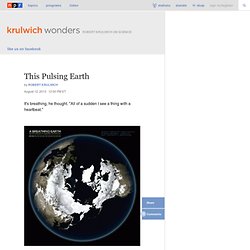 "All of a sudden I see a thing with a heartbeat. " John Nelson is a designer, well known for tracing complex weather patterns or cultural information on maps, so considering what he usually does, this was easy. Mysterious Dancing Lights In Afghanistan : Krulwich Wonders... Sgt. 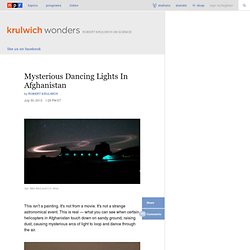 Mike MacLeod/U.S. Army This isn't a painting. It's not from a movie. It's not a strange astronomical event. Courtesy of Michael Yon This doesn't always happen. Almost certainly the helicopter's blades have a role. The dust clearly matters. Maybe, Michael thought, but whatever causes this, it ought to have a name. They aren't. Hide captionBenjamin Kopp U.S. Corporal Benjamin Kopp was shot in 2009 during a battle in Afghanistan and died of his wounds just over a week later. Hide captionJoseph Etchells gov.uk. Cassini captures photo of Earth and Moon as seen from Saturn.

If the midweek hump has you in a contemplative spirits, this stunning image of Earth as pictured by the Cassini spacecraft from Saturn, 898 million miles (1.44 billion kilometers) away, may offer a little context. 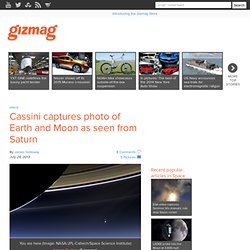 The Earth and the Moon appear to be seemingly insignificant specks from the perspective of the spacecraft from its orbit around the gas giant, the second biggest planet in the Solar System. But as it turns out, Cassini is actually talking us up. View all. Black Country crop circles prove phenomenon is no hoax, claims Australian expert. AN Aussie historian believes he has buried forever the ‘cereal’ lie that crop circles are the work of hoaxers – by unearthing Black Country images of them dating back to 1945 and beyond. 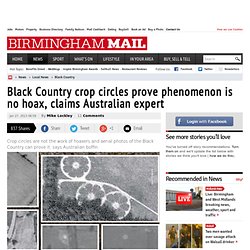 It’s ‘barley’ believable, but Greg Jefferys has also uncovered evidence of the phenomenon in scientific documents dating back to 1880. The boffin, from Hobart, Tasmania, says his findings prove there’s more to the mysterious circles than hoaxers playing silly tricks. “This discovery proves that claims by various artists to be the sole creators of crop circles are themselves a hoax,” he says. “It just goes to show that the circles remain unexplained. “I hope this discovery will stimulate renewed interest in crop circles by serious scientific researchers who have been fooled by the hoax claims.” 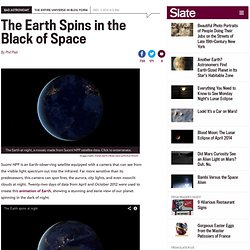 The instrument’s “day-night” band takes pictures in low-light conditions by adjusting the exposure so that bright pixels don’t oversaturate and dim ones don’t vanish into oblivion. Scientists are using the resulting mosaic pictures to study patterns such as how Manhattan sank into semi-darkness after Hurricane Sandy and how geography forces people into settlement patterns, such as along the densely populated Nile in Egypt.