'Win if you can, lose if you must, always cheat, and if you have to leave the ring, leave tearing it down.' 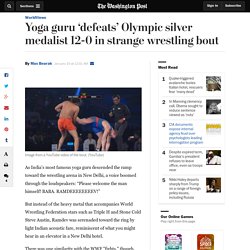 (YouTube) As India's most famous yoga guru descended the ramp toward the wrestling arena in New Delhi, a voice boomed through the loudspeakers: “Please welcome the man himself! BABA. RAMDEEEEEEEEV!” But instead of the heavy metal that accompanies World Wrestling Federation stars such as Triple H and Stone Cold Steve Austin, Ramdev was serenaded toward the ring by light Indian acoustic fare, reminiscent of what you might hear in an elevator in a New Delhi hotel.

There was one similarity with the WWF "fights," though. World worldviews Dallas shooting updates News and analysis on the deadliest day for police since 9/11. post_newsletter353 follow-dallas true after3th false Today's WorldView What's most important from where the world meets Washington Please provide a valid email address. QUOTES BY SPUTNIK MONROE. He Came from Memphis. Sputnik Monroe, in a rare dapper moment, from the collection at memphiswrestlinghistory.com (Pilfered from Lucifester.com) There used to be this cool little shop in downtown Port Angeles, Mousetrap Antiques, where I’d kill time before the arrival of beer o’clock. 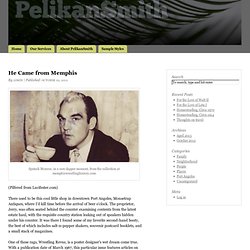 The proprietor, Jerry, was often seated behind the counter examining contents from the latest estate haul, with the requisite country station leaking out of speakers hidden under his counter. It was there I found some of my favorite second-hand booty, the best of which includes salt-n-pepper shakers, souvenir postcard booklets, and a small stack of magazines. One of these rags, Wrestling Revue, is a poster designer’s wet dream come true. He looked like a badass with his shock of white hair, a man known for fighting dirty with the other wrestlers, sticking fingers and chairs places they didn’t belong. Ox Baker starts riot in 1974. Ox Baker Laying down the law to Gordon Solie and Ron Garvin. 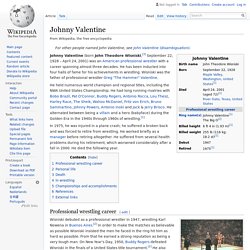 He has been inducted into four halls of fame for his achievements in wrestling. Wisniski was the father of professional wrestler Greg "The Hammer" Valentine. Professional wrestling career[edit] In Mid-Atlantic Championship Wrestling, Wisniski was awarded the Mid Atlantic Heavyweight Championship in January 1974, after Jerry Brisco left to work in Japan. Bearcat Wright defeated Wisniski in a boxing match to win the title on May 13, 1974. Personal life[edit] Wisniski was originally from Maple Valley, Washington.[1] He is said to have come from a disfuntional family. In August 2000, Wisniski fell from his front porch, and had a number of injuries and complications. Valentine has been recognized for his wrestling career by several sources. Death[edit] Valentine died peacefully in River Oaks, Texas on April 24, 2001. St. St. Sputnik Monroe (wrestler) Monroe was born in Dodge City, Kansas. 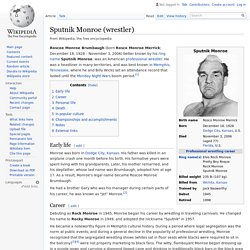 His father was killed in an airplane crash one month before his birth. His formative years were spent living with his grandparents. National Sputnik Monroe Day. Bugsy McGraw. Professional wrestling career[edit] Career In The 60s & 70s[edit] Davis started his career as The Big "O" in 1967 in Florida, Detroit, and Central Areas Wrestling, wrestling under a mask. 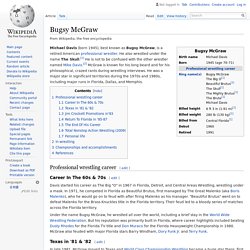 In 1971, he competed in Florida as Beautiful Brutus, first managed by The Great Malenko (aka Boris Malenko), who he would go on to feud with after firing Malenko as his manager. "Beautiful Brutus" went on to defeat Malenko for the Brass Knuckles title in the Florida territory. Their feud led to a bloody series of matches across the Florida territory.

Texas in '81 & '82[edit] In late 1981, McGraw moved to Texas and World Class Championship Wrestling became a huge star there, first as a babyface feuding with The Great Kabuki and defeating him for the NWA American Heavyweight Championship. Boris Malenko. Early life[edit] 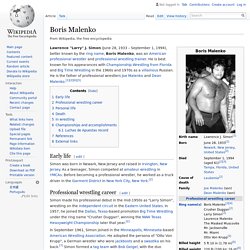 Hans Mortier. Tampa's wrestling history may be marked on new center's wall. TAMPA — In the scripted world of professional wrestling, Eddie Graham and Boris Malenko were the perfect rivals. 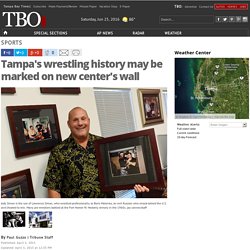 Graham was the blond-haired, blue-eyed All American who touted the virtues of his country. Malenko was the evil Russian who smack-talked the U.S. and cheated to win. They crossed paths in Tampa in the 1960s at the height of the Cold War, when their industry still operated under the guise of legitimate competition and real characters. The battles they waged against one another in West Tampa’s 83,000-square-foot Fort Homer W. Hesterly Armory are credited with turning the city into the Southeast hub of professional wrestling in the 1980s.

Today, the armory between Howard and Armenia avenues is being converted into a Jewish Community Center and its leaders are hoping fans who remember Graham and Malenko will help pay for construction costs. They’re working through gofundme.com/wrestlingtampa to raise $250,000 for a wall inside the new center commemorating its wrestling history. Johnny Valentine promo. Sputnik Monroe's Unique Style. Sputnik Monroe's Unique Style.