The Coming Software Apocalypse – The Atlantic. There were six hours during the night of April 10, 2014, when the entire population of Washington State had no 911 service. 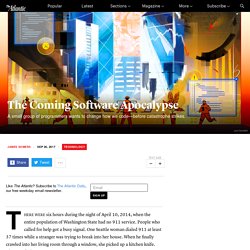 People who called for help got a busy signal. One Seattle woman dialed 911 at least 37 times while a stranger was trying to break into her house. When he finally crawled into her living room through a window, she picked up a kitchen knife. The man fled. To hear more feature stories, see our full list or get the Audm iPhone app. US Army Figures Out How To Do Facial Recognition in the Dark - Defense One. Naval Aviators Describe How the F-35's Brains Will Change Air Warfare. They gave the F-35 rave reviews during a show-and-tell at sea, but questions remain about its troubled software. 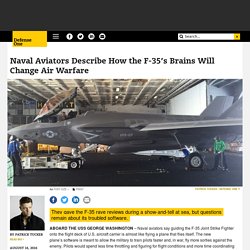 ABOARD THE USS GEORGE WASHINGTON – Naval aviators say guiding the F-35 Joint Strike Fighter onto the flight deck of U.S. aircraft carrier is almost like flying a plane that flies itself. The new plane’s software is meant to allow the military to train pilots faster and, in war, fly more sorties against the enemy. Pilots would spend less time throttling and figuring for flight conditions and more time coordinating with other aircraft, working with huge volumes of data, and managing complex missions against ever-more sophisticated adversaries.

It all was on display Monday as the Navy sought to convince the public that America’s most advanced fighter jet is almost ready for action. The Navy variant of the jet is expected to reach initial operating capability in 2019. “The aircraft does a lot of stuff that, before, I would have to fight the aircraft,” said Marine Maj. Subscribe. HMS Ocean receives all-in-one computer system. HMS Ocean is already the largest vessel in the Royal Navy, so to help lighten ship, BAE Systems and Ministry of Defence’s (MoD) Maritime Combat Systems is deploying a new system on the helicopter carrier that hosts software across multiple systems, allowing the crew to access software from navigation, communications, sonar, and other combat systems from a single console. 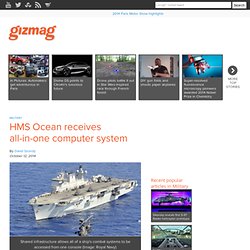 The Shared Infrastructure system makes operations simpler and allows ship's systems to be consolidated by sharing equipment, which means savings in space and power. This, in turn, means fewer spares need to be stowed aboard. The upshot is more room below decks and lower operating costs. Autonomous vehicles to join the US Army. Over the next quarter of a century, the US Pentagon sees robots becoming more and more a part of military life with robot warplanes, submersibles, and infantry vehicles taking their place on the battlefields of the future. 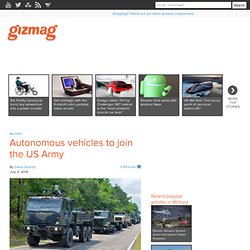 It may conjure up a very flashy vision of Transformer-like killing machines, but the US Army sees the first robots as autonomous vehicles used in the more prosaic task of delivering groceries and other supplies. For all the cost of ships, planes, armor, and weapon systems, manpower is the single greatest expense in modern, industrialized armed forces. Aside from costs like pay, training, and pensions, soldiers also need equipment, clothing, food, shelter, medical care, recreation, and the logistical infrastructure to supply them. In addition, it costs more to carry out many tasks in a military setting because there are different rules. It’s small wonder, therefore, that the US Army is keen on robots to handle the supply lines. Quantum-enhanced radar can't be fooled by electronic detection countermeasures. The military use of radar has always had a yin-yang dynamic – as new forms of radar are developed, so too are new ways to jam them. 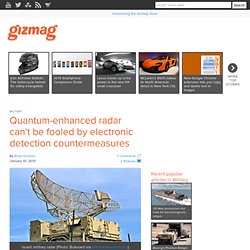 A team of physicists at the University of Rochester has discovered how to defeat the latest active radar jamming methods by taking advantage of the quantum properties of photons. While this new anti-jamming technology cannot remove the false information, it provides an immediate alert that false information is being received. The new jamming method on the block is Digital Radio Frequency Memory (DRFM) jamming. Sandia Scientists Model Dynamics of Social Protest. Researchers at Sandia National Laboratories have been studying the ways that information, ideas and behaviors propagate through social networks in order to gain advance warning of cyber attacks or other threatening behavior. 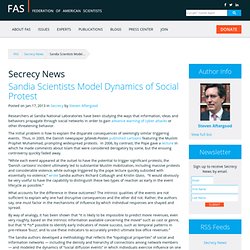 The initial problem is how to explain the disparate consequences of seemingly similar triggering events. Knee Scan Identification: MRIs May Be Better Way To ID Travelers, Study Suggests. Imagine walking swiftly through an airport terminal, breezing through security checkpoints without having to wait in long lines. 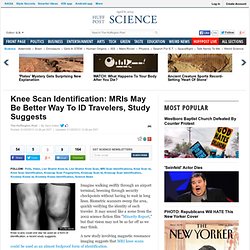 Biometric scanners sweep the area, quickly verifying the identity of each traveler. It may sound like a scene from the 2002 science fiction film "Minority Report," but that vision may not be as far off as we may think. A new study involving magnetic resonance imaging suggests that MRI knee scans could be used as an almost foolproof form of identification. For the study, Dr. Lior Shamir, an associate professor at Lawrence Technological University in Southfield, Mich., analyzed knee scans of 2,686 people. Identification methods have advanced in recent years as tech companies and universities have sought to develop new techniques for quick and seamless recognition. The new study builds on 2009 research in which Shamir tested biometric IDs using knee X-rays instead of MRIs.