Rustling Up some Soups & Stews 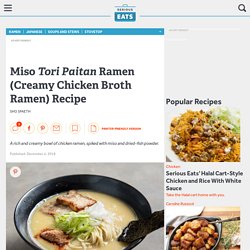 Apart from other optional toppings, like braised pork belly and a marinated soft-boiled egg, this bowl of ramen is garnished with chili gyofun (dried-fish powder), finely diced white onion, sliced scallions, and lime. To fully disperse the tare in the broth, we recommend using an immersion blender (see note). You can also use a whisk to incorporate the tare. [Photograph: Vicky Wasik] This bowl of ramen features a creamy and rich chicken paitan broth flavored with a tare, or seasoning, made from a mixture of red miso, soy sauce, sake, dried fish, kelp, and fresh red chilies (optional).

To fully disperse the tare in the broth, we recommend using an immersion blender (see note). One Pot Thai Noodle Soup with Peanut Sauce - WhitneyBond.com. This post may contain affiliate links. 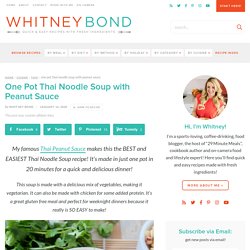 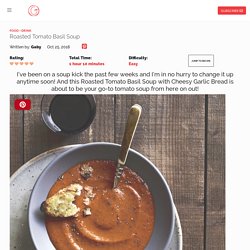 I mean, what else are you supposed to eat alongside your grilled cheese during the fall and winter months? Hello?!? Tomato soup is VERY important which is why I’m so excited about this recipe. It’s great for anytime of the year. If you’re in the middle of winter and there aren’t any great tomatoes, you can use canned roasted tomatoes and it’s going to be perfect. Slow Cooker Corn Chowder. The easiest crockpot soup ever! 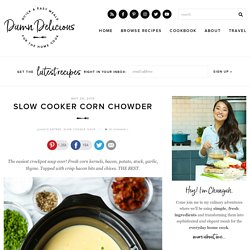 Fresh corn kernels, bacon, potato, stock, garlic, thyme. Topped with crisp bacon bits and chives. THE BEST. This is legit my favorite year-long soup. Perfect for those super hot summer days where you’re out by the beach all day, coming home to this hearty fresh corn soup where you can get 8 ears of corn for just a $1 at your local grocery store. An added bonus is that you don’t even have to turn on the stovetop or oven (especially if you have the nifty saute function in your slow cooker!)

Then there’s the Chiberia days – you know, the -50 windchill winter Chicago nights where nothing in the world could beat this cozy cozy soup. Mushroom Potato Chowder. So hearty and so creamy! 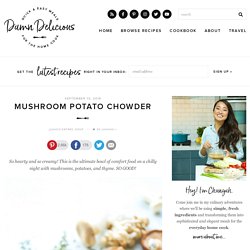 This is the ultimate bowl of comfort food on a chilly night with mushrooms, potatoes, and thyme. SO GOOD! Guys. Easy Clam Chowder. Clam chowder is easier to make than you think – and the homemade version is unbelievably creamy, flavorful and chockfull of clams! 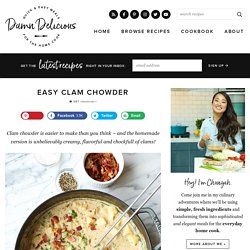 Soup season has come and gone, but a bowl of clam chowder can really be eaten in any kind of weather, especially when it comes to the homemade version. If you didn’t know, clam chowder is actually a very simple soup to prepare with a few pantry ingredients. Now some recipes call for fresh clams but I actually prefer to use canned clams for several different reasons. 1.

Secret Ingredient Tomato Soup Recipe (vegan) I don’t know if I’ve told you, but I’m a little bit of a tomato soup fanatic. 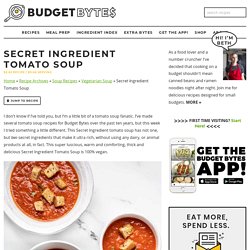 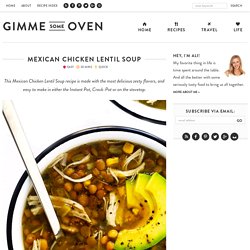 It’s a cold and rainy day here in Barcelona, and I’m going on day five (oof) of a spring cold, so today seemed like the perfect day for this cozy chicken lentil soup! ♡ This recipe has actually been sitting in my drafts folder for a few months now and I’ve somehow keep forgetting to share it with you — which is a bit crazy because I’ve been making it constantly this winter. With just five or so minutes of prep time, this soup is one of the hands-down easiest recipes in my rotation. And, I might add, one of the tastiest. The Best French Onion Soup. Sweet Potato Beef Stew. Turkey White Bean Chili. Our kitchen is done and I can’t wait to show you! 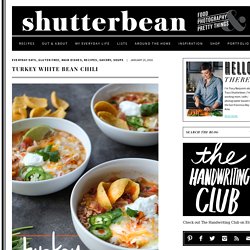 Here’s the BEFORE if you don’t know what I’m talking about. Yesterday I spent all day putting things away. It almost felt like we moved and we were unpacking. I traveled to the grocery store to fill up our cabinets with essentials for the week, hoping to escape the wrath of the Patriots game. Ugh. Chili is just an excuse to eat alllllllll the toppings. This chili will only get better as days go on. Let’s gather our ingredients. Every Single Slow Cooker Soup Recipe You Could Ever Need. Green Chile Stew - Hearty New Mexico Comfort Food. Food & Wine. Carne en su jugo is the Mexican soup that has it all (steak, bacon, beans, avocados, chiles...) Slow Cooker Tomato Basil Soup. Classic French Onion Soup. Lakemont chili: Tex-Mex beef and bean stew. 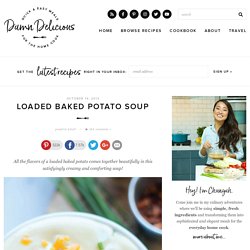 So now that I work from home all day, I get to watch a lot of television. How I Met Your Mother, Grey’s Anatomy, Charmed, Law and Order SVU, Gilmore Girls – you name it (oh and btw, half these shows are on Lifetime, which is like the best network ever). But yesterday I couldn’t watch my Grey’s reruns because they played A Walk to Remember instead. Now this movie came out when I was in the 8th grade, and I was completely googly-eyed over 24-year old Shane West. Now that it’s on 11 years later, nothing has changed, except I’m crying in almost every scene – when Shane West takes Mandy Moore to the state line and she’s in two places at once, or when he names a star after her – yeah, sob fest all over. Creamy Tomato Soup with Grilled Cheese "Croutons" Food & Wine. Chipotle Pumpkin Soup Recipe. Sweet Potato Chicken Noodle Soup. Food & Wine. The BEST Potato Soup!

This easy Potato Soup recipe is truly the best! It’s quick and easy to make on the stovetop, it’s nice and creamy (without using heavy cream), and it’s always so cozy and comforting and delicious. Do you have a favorite potato soup recipe? If not — psst — bookmark this one! ♡ Food & Wine. Slow Cooker Spicy Pumpkin Chicken Corn Chowder. Roasted Tomato + Hatch Chile Soup with a Grilled Cheese (of course) – A Cozy Kitchen. I had a dream that I directed a documentary about La Croix. I honestly have no idea what prompted this insane dream. Yes, I love that sparkling water but for it to appear in my dreams as my next creative venture is a bit weird. But maybe they have an exciting backstory—who knows! Anyway, I know that everyone is screaming FALL at the top of their lungs (especially Michael’s Craft Store. Chicken, Tortilla and Lime Soup Recipe.

Food & Wine. Food & Wine. Thai Green Curry Chicken Soup. Everyone’s favorite Thai green curry can be made right at home into the coziest, most comforting chicken soup ever! It is so easy to make with easy-to-find ingredients, loaded with tender chicken bites, ginger, coconut milk, snow peas, lime juice, cilantro and rice noodles! When we went to Thailand last month, we stayed at this villa in Koh Samui with a home cook that we called Mrs. Dao. She made us an American breakfast in the mornings, made up our room when we left for the day, and whipped up dinner in a pinch when we got back.

She was simply the best. But guys. She made the best green curry I have ever had in my entire life. Outlook.com - Microsoft free personal email. Outlook prioritizes your most important email into a Focused Inbox. And saves everything else so you can see it when you’re ready. Outlook automatically adds travel and flight itineraries from email onto your calendar. Quickly find those important travel plans when you need them. Edit Office files right from your inbox and attach files from OneDrive, Google Drive, Dropbox, and Box. Sharing documents has never been easier. Get the best mobile email experience. Fire-Roasted Tomato Bisque Recipe - Diane Rossen Worthington.

Instant Pot Potato Corn Chowder. Easy Garlic Soup with Homemade Bone Broth Recipe. Ingredients. Chicken and Wild Rice Soup Recipe - Amanda Johnson. Sweet Corn, Kielbasa and Potato Soup - Iowa Girl Eats. Chicken Tortilla Soup. Creamy Chicken and Wild Rice Soup. Thanks to the Instant Pot pressure cooker, this easy chicken with wild rice soup is rich, creamy (without any added cream), and fast to make, and it tastes even better the next day, making it a great addition to your meal prep plans. If you don’t have a pressure cooker, not to worry, I’m sharing my stove top directions as well.

Enchilada Chicken Tortilla Soup – A Cozy Kitchen. Ok, so firstly I want to say YAY and THANK YOU to all of you for joining Cozy Book Club. I have added a tab at the far right of this blog so all of the posts will live there. Instant Pot Carrot Soup Recipe. Outlook.com - Microsoft free personal email. Spicy Sausage and Potato Soup. Creamy Chicken and Mushroom Soup. Chorizo and Chicken Soup Recipe. For the avocado crema, lime juice and sour cream are added to mashed avocados for a smooth, tangy version of guacamole. Tomato Rasam.