The 21 Best Rums of the 21st Century (So Far), Ranked. Rum has spent much of the new millennium waiting in the wings, eagerly anticipating its breakout moment while other spirits had their turn in the spotlight. 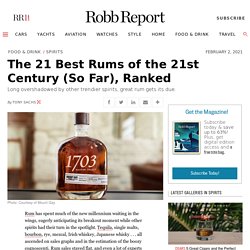 Tequila, single malts, bourbon, rye, mezcal, Irish whiskey, Japanese whisky . . . all ascended on sales graphs and in the estimation of the boozy cognoscenti. Rum sales stayed flat, and even a lot of experts on the subject didn’t know quite how their favorite expressions were made or what went into them, citing the “Wild West” rules, or lack thereof, by which the stuff was produced. Starting around 2009 or so, I would predict that the coming year would mark rum’s big breakthrough, and the fact that I repeated that prediction multiple times illustrates how wrong I was. But sometime in the last five years or so, that prediction came true . . . kind of. The 15 Best Rums to Drink in 2020. The 14 Best Bottles of Rums You Can Buy in 2020. The definitive guide to the best rum of 2020 explores everything you need to know to get into the rum game, from crucial terms to key label identifiers and a curated list of the best bottles for every boozy situation at every price point. 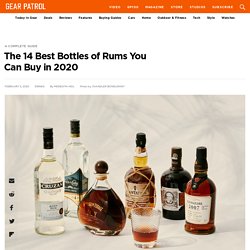 With rum-focused bars opening at an increasing speed and top-shelf bottles popping up on liquor store shelves across the country, rum has come a long way since the days of pirate-laden jugs and soap-scented vacation crushers. The Best Rum: 2019. The Best Cheap Rums, According to Bar Professionals - InsideHook. “If you keep on drinking rum, the world will soon be quit of a very dirty scoundrel!” 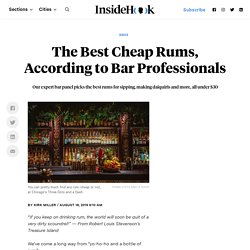 — From Robert Louis Stevenson’s Treasure Island We’ve come a long way from “yo-ho-ho and a bottle of rum.” The sugarcane-based spirit is no longer the province of pirates, nor just your mixer with Coke. It’s a fantastically versatile tipple, produced all over the world (although ideally in the Caribbean) and just as complex and interesting as a whiskey or tequila. 10 Best Rum Brands 2019 - What Rum Bottles to Buy Right Now. Legendary Rum Maker Don Pancho Doesn’t Care if You Read This Story. The first thing Philip Guerin wants you to know about Francisco “Don Pancho” Fernandez is that he’s real. 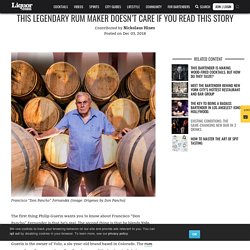 The second thing is that he blends Yolo rum. Foursquare Premise Rum. The Best Cheap Rum 2018. The Best Expensive Rum of 2018. 8 Great Rum Bottles to Try Right Now. Maggie Campbell Is the Unsung Savior of American Rum. Little did Maggie Campbell know that getting stuck in the Scottish town of Oban in 2004 would change her life. 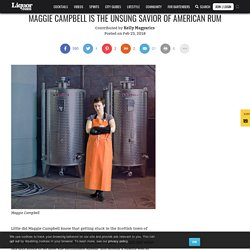 The head distiller and president of Privateer Rum was then a University of Colorado student uncertain just what she was going to do with her philosophy degree. But during a family trip to Scotland, a local suggested passing the time by visiting the town’s whisky distillery. A light bulb went off. “It opened my eyes that this is an actual job people do.” Where to Start with Sipping Rum. Tropical cocktails are pretty much the most popular way to drink rum. 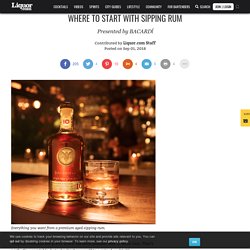 That’s perfectly acceptable, but why limit yourself to a mixed cocktail? You should be sipping aged rum and appreciating all the nuances it offers. But navigating the category and all its different expressions can sometimes be as complex as a premium aged rum’s flavor profile. Keep it simple by starting with a product that sums up everything there is to love about aged rum: BACARDÍ Gran Reserva Diez. Essential Rum Bottles for Your Home Bar. 8 Aged Rum That Are Perfect Sippers. The Differences Between Rum, Rhum Agricole, and Cachaça.

With the resurgence of tiki culture, punches, and high-end sipping spirits, expect to notice more space behind the bar dedicated to cane-sugar-based spirits. 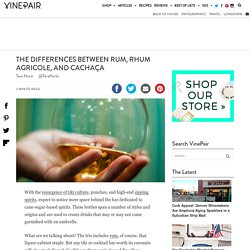 These bottles span a number of styles and origins and are used to create drinks that may or may not come garnished with an umbrella. What are we talking about? The trio includes rum, of course, that liquor-cabinet staple. But any tiki or cocktail bar worth its coconuts will also stock French-Caribbean rhum agricole and Brazilian cachaça. All three use cane sugar as their bases. The Best Rum Under $50. The Best New Spiced Rums. For many of us, “spiced rum” conjures images of poolside Rum & Cokes or hazy college bar nights. 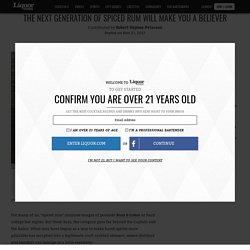 But these days, the category goes far beyond the Captain and the Sailor. What may have begun as a way to make harsh spirits more palatable has morphed into a legitimate craft cocktail element, where distillers and blenders can indulge in a little creativity. “There are really great options out there that go beyond what we were drinking in the 1990s,” says Kate Perry, the general manager at Seattle’s iconic rum bar Rumba. She oversees more than 500 different rums and makes a house spiced version, inspired in part by her trips to the Caribbean. “One of my favorite things to do is check out all the local spiced rums, made in giant plastic gallon jugs with barks, roots and spices.”

In fact, experimentation in premium spiced rum is on the rise in recent years, as a whole host of new bottles have appeared on liquor store shelves, commanding your taste and attention. Rum That Acts Like Whiskey. Of course, Nashville embraces its native Tennessee whiskey, as well as bourbon from neighboring Kentucky. 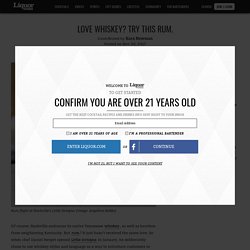 But rum? It just hasn’t received the same love. So when chef Daniel Herget opened Little Octopus in January, he deliberately chose to use whiskey styles and language as a way to introduce customers to his personal favorite spirit, rum. “I’ve had a love affair with rum ever since I had my first sip,” says Herget, who grew up in Florida and traveled throughout the Caribbean, two rum-soaked regions. “Unfortunately in the South, it’s not regarded as a quality product. Little Octopus (image: Lisa Diederich) How to Drink Rum: 5 Tips. 8 Of The Best Caribbean Rum Brands You Need To Try. When it comes to quality rum, we recommend setting the sugary mixers aside and enjoying this delicious spirit on its own. 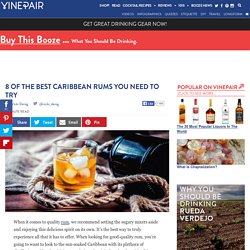 It’s the best way to truly experience all that it has to offer. When looking for good-quality rum, you’re going to want to look to the sun-soaked Caribbean with its plethora of distilleries and bottles. We’ve rounded up the eight best bottles of Caribbean rum on the market today to help you usher in the summer in style. Boukman Botanical Rhum This rum is crafted from two of Haiti’s most renowned terroirs for rum: Croix des Bouquets and Cap Haitien. El Dorado 12 Year Aged Produced in Guayana’s Demerara country for over three centuries, this rum is distilled in both steel and wooden pot stills, then aged in ex-bourbon barrels.

Havana Club 3 Anos Originally founded in 1878, the Havana Club brand began in 1934, producing significant amounts of rum for European export. Guide to Cuban Rum - History of Rum in Cuba and the Best Cuban Rum Brands to Try. If Cuba is unwilling to make a better deal for the Cuban people, the Cuban/American people and the U.S. as a whole, I will terminate deal.— Donald J. Trump (@realDonaldTrump) November 28, 2016 But Cate believes it is only a matter of time before Americans petition for the embargo on rum to be lifted. "Consumers will find that it's typically a light-bodied, delicate, generally pleasing, and very approachable rum," he says. "Increased travel and cultural exchange will fuel the demand, and American consumers are tired of being the only market on earth denied the product. " 7 Best Rums Under $50. Login I forgot my password Don't Have an Account? Signup Sent!

Please check your email for a link to reset your password. Coolmaterial. Not all rums are created equal. Some rums are sweet and rich like your favorite bourbon. Others are harsh and seem like they would be better used as industrial cleaner as opposed to a cocktail ingredient. The key is to know what to look for and figure out how to distinguish the cheap, bad rums from the inexpensive, great finds.

Here are fifteen outstanding rums you need to try. They range in price from $18 to $158 and prove that you don’t need to pay a month’s rent to enjoy a satisfying rum. Brugal Especial Extra Dry Rum. Cana Brava Reserva Aneja 7 Year Rum. The 86 Company has done the nearly impossible: it has entered into an extremely competitive market with a suite of small brands focused exclusively on the needs of bartenders. In the process, The 86 Co. went toe-to-toe with major brands including Absolut Vodka, Beefeater Gin, Patron Tequila, and Bacardi Rum.

The 86 Company did this without the massive budgets or salesforce of a big brand, and despite staggering odds, it worked. For the second year in a row, The 86 Co. made Drinks International’s list of Bartender’s Top 10 choice, a staggering achievement for such a small company. So how did a small company like The 86 Co. take on the big brands and win? They did it by deeply understanding how bartenders work, what they need, and how to best deliver that to them. Cana Brava 7 Year Old Reserva Aneja Rum (45% ABV, $44.99) – made from Panamanian sugar cane molasses and aged in ex-bourbon barrels for 7 years, this rum is dark gold in color. El Dorado 21 Year Old Special Reserve - Top 10 Rums - Best. Captain Morgan Grapefruit, Coconut, and Pineapple Rum. Diageo has realized something very important about its Captain Morgan brand – it’s a brand not of a single product, but a very specific lifestyle brand for a category of spirits.

For a long time, Diageo has seen great success with the core Captain Morgan Spiced Rum, but slowly and surely they’ve been making efforts to expand the brand, slowly turning the Captain Morgan’s ship around and sailing it towards open waters. The Best Sipping Rums for Every Drinker. Life is hard for lovers of rum. Nine times out of ten, all they can expect to find at the local watering hole is Bacardi, Captain Morgan and Malibu, while their whiskey-swilling compadres can count on a wide selection of bourbons, ryes, single malts and so on, whether the walls of said watering hole are lined with flat screens or “reclaimed wood”.

Is there no place for connoisseurs of whiskey’s older sibling? Review: Angostura Rum. In 1824, Dr. Johann Siegert started producing aromatic bitters in Angostura, Venezuela. Although developed as a health tonic — Dr. Siegert was Surgeon General to the armies of Simon Bolivar — they quickly became a key ingredient in many varieties of a popular new drink known as the “cock-tail”. Almost two centuries later, Dr.