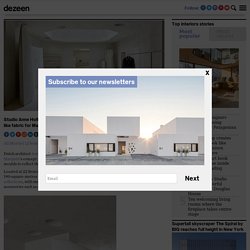 Located at 22 Bruton Street, the boutique is laid out across 190-square-metres and displays Maison Margiela's Co-Ed collections, with men's and women's ready-to-wear alongside accessories such as shoes, jewellery and eyewear. Concrete and white minimalism defines rick owens soho store in new york. Created by his wife, michele lamy, and the fashion designer himself, the rick owens soho store in new york city is a vision of minimalistic, gothic style. situated on the corner of howard street and crosby street, the cavernous retail space embraces a bare aesthetic that allows the pieces to take center stage. all images courtesy of rick owens the store is characterized by a simple palette of colors and materials. the combination of exposed concrete, white sheetrock, steel and mirors ensure a pared-back and almost brutalist interior. on the first floor level, shoes, bags, and various other rick owens accessories are presented like artwork in a gallery. a monumental concrete staircase then leads to a second level, where an open white space displays the range of men’s and women’s pieces of the avant-garde label. project info: project name: rick owens new york. 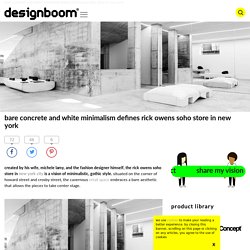 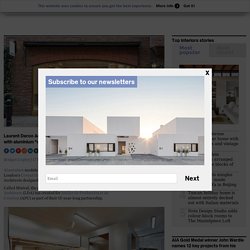 Called Mistral, the project is the latest that Laurent Deroo Architecte (LDA) has created for Atelier de Production et de Création (APC) as part of their 15-year-long partnership. The volumes are used to create spaces within the store's shell instead of adding permanent walls. Arquitectura-g designs acne studios store in nagoya, japan. Barcelona-based studio, arquitectura-g, has completed the design of a new retail space in nagoya for luxury fashion brand acne studios. the project, which covers a total floor area of 2960 ft2 (275 m2), has been developed around the notion of contrasts. playing with high-tech and low-tech, roughness and delicateness, chaos and order, the final interior welcomes clients into a fine balance of opposing elements. all images © josé hevia. 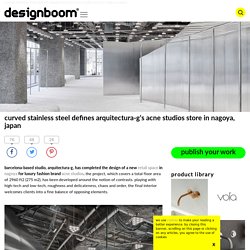 Box is designed to be the "perfect" place to pick up online orders. Design studio Fyra has fashioned brightly hued interiors for this hassle-free collection point in Helsinki, which includes a recycling area, fitting rooms and product show space. 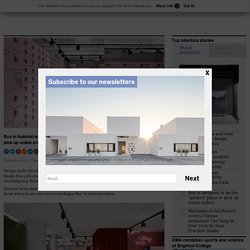 Situated at the heart of Helsinki, Box is a self-service collection point where locals can retrieve packages they've ordered online. It's the brainchild of Posti – the Finnish postal service – which wanted to set up a delivery space for online purchases that was "more than just a row of parcel lockers". 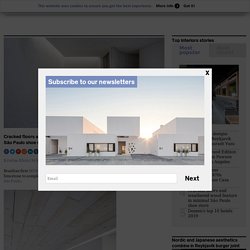 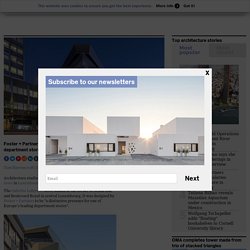 The Galeries Lafayette store stands at the corner of Grand Rue and Boulevard Royal in central Luxembourg. It was designed by Foster + Partners to be "a distinctive presence for one of Europe's leading department stores". 's top 10 shop interiors of 2019. A pink-tinged CBD store in New York and a minimalist handbag boutique in Milan are among the top 10 shops of 2019, selected by interiors reporter Natasha Levy as part of Dezeen's yearly review. 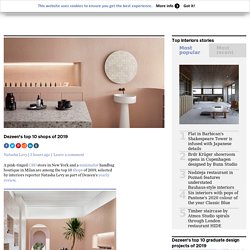 Standard Dose, USA, by SR Projects It's only fitting that SR Projects set out to create a "calm escape" inside this New York store, which exclusively sells products infused with CBD – a cannabis-derived substance known for its anxiety-reducing qualities. The space is decked out in a soothing mix of pink plaster, pearly white tiles and pale grey terrazzo. There are also a series of arched doorways that take customers through to the on-site tea rooms, meditation spaces and yoga studio. Find out more about Standard Dose › Valextra, Italy, by John Pawson. Forte_forte combines brick, yellow onyx + brass in its latest boutique in london. Following the openings of its milan and paris boutiques, italian clothing brand forte_forte has now expanded to the london market with its latest store at 108 draycott avenue, in chelsea. conceived by co-founder giada forte and robert vattilana, the brand’s creative director, the boutique comprises a succession of tactile and visual sensations within its long and narrow space, that leads from the street to an open courtyard in which the protagonist is a broadly shaped japanese maple tree. a palette of refined materials including brick, yellow onyx, brass and velvet compose the entire space, adding to the entirety of the brand’s fable while celebrating the singular uniqueness of the particular place. all images courtesy of forte_forte project info: name: forte_forte location: 108 draycott avenue, chelsea, london, UK sofia lekka angelopoulou I designboom. 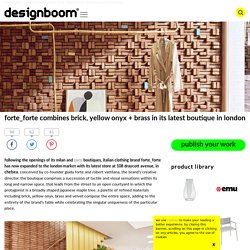 Snøhetta wraps aesop’s interiors in a monumental granite structure in sydney. In its signature minimal, yet local aesthetic, aesop opens a new shop designed by architecture firm snøhetta in sydney, australia. at the heart of the city’s central business district, the shop lies on the pedestrian pitt street, and with its contrasting textures and materials to the surrounding buildings, the store lures passersby into its mysterious charm. snøhetta aimed to recreate the shop’s serene and peaceful location in the city, bringing those feelings into the space. the design process began with taking inspiration from the coast and waterfront at bondi beach and bringing the greatness and tranquility of its cliffs to the bustling downtown environment. project info: design: snøhetta client: aesop location: pitt street, sydney, australia cristina gomez I designboom. 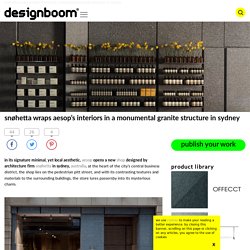 Anders berensson architects versatile surfaces in swedish outdoors store. Anders berensson architects has designed a transforming interior space in stockholm, built with local wood and a rotating centerpiece. ‘camp fenix’. an office space for the outdoor company group ‘fenix outdoor’, which includes brands like fjällräven, primus and tierra, transforms from office to showroom to lecture hall just by flipping a central wall. the designers made an office that doubles as a getaway base camp for the companies: they can be close to nature while developing new products for the outdoors. therefore, the office was adapted for activities in the nearby forest and blend into its natural surroundings. fallen trees from the very same forest is also the building material for the new office interiors. project info: designers: anders berensson architects client: fenix group.

Five design-focused delis around the world with delectable interiors. Delicatessens might simply be places to pick up provisions, but architects and designers are increasingly completing them with striking interiors. Dezeen has picked out five of the best. Ranging from a store in London with minimalist concrete display stands and another in Melbourne with salami-like counters, check out the full selection below: Natoora, UK, by Noé Galomb and Finch The "slick and minimal" interiors of this deli in west London's Chelsea do without typical supermarket food storage like produce-filled hessian sacks and plastic crates. Food stuffs are instead arranged in order of seasonality and displayed on stacked concrete shelves, which are intended to reference layers of soil. Grey surfaces throughout are offset by a terrazzo-like till counter and central sink basin. KCA composes yakafu DIY bakery in china with geometric terrazzo blocks.

Shanghai-based studio KCA – kostas chatzigiannis architecture has completed yakafu’s flagship DIY bakery in anji, a picturesque town near hangzhou, china. bold, graphic, and brightly colored, the store invites adults and children who want to learn how to bake bread and pastries – or simply enjoy them – into its double-story interior, characterized by geometric terrazzo surfaces and metal details in different hues. all images by anne sophie heist the upper floor of the store is dedicated to the DIY part of the bakery, where visitors can take workshops to learn how to bake bread and pastries on their own. a large, graphic mural extends from the ground level up to the ceiling, visually connecting the two floors, while perforated metal surfaces in different hues create a sense of openness while defining the space. project info: architect: KCA – kostas chatzigiannis architecture client: yakafu main use: DIY bakery.

Patterns of escalante marketplace in costa rica represent the journey of the sun. Blue bottle coffee kyoto is a minimalist machiya renovation by schemata. Only If creates space-themed underground coffee bar in New York. Metallic paint, perforated aluminium and black rubber are combined to give this Manhattan espresso bar by Only If Architecture a futuristic feel. Voyager Espresso provides a caffeine stop in the concourse of the Fulton Street subway station, in Manhattan's Financial District. Named after the Voyager space programme, the cafe is the first location from an Australian team that credits itself with taking a "scientific approach to coffee", and wanted an interior design to reflect this. Only If was commissioned to transform an unusually shaped retail unit, and intentionally steered away from the stereotypical appearance of boutique cafes.

"From the beginning we knew we wanted to avoid the clichéd language of white tile, reclaimed wood, and exposed Edison bulbs," said Only If principal Adam Snow Frampton. "The material palette we developed is inexpensive yet futuristic. " Abraham Cota Paredes creates stark white interior for hair salon in Mexico. Mexican architect Abraham Cota Paredes has given this hair salon in Guadalajara a minimal makeover, hiding beauty products and accessories in the all-white space. Paredes and his local firm Cotaparedes Arquitectos were asked to overhaul the identity of L'Occoco – one of the largest beauty salon franchises in the country – to "reflect an image of elegance". The Salon L'Occocó in Guadalajara was the first to receive an overhaul, with a monochrome interior designed to match the company's black-and-white logo.

Japanese designer Yota Kakuda used a bespoke aluminium tile to cover the walls and floors in this shop that sells baked cheese tarts (+ slideshow). Jonathan Tuckey designs two London shops for Malin+Goetz. Jonathan Tuckey Design has completed two London shops for skincare brand Malin+Goetz – one filled with plywood boxes and the other featuring a reflective ceiling (+ slideshow). British architect Jonathan Tuckey was asked to create the first two UK branches of the American brand, which was launched by entrepreneurs Matthew Malin and Andrew Goetz back in 2004.

Similar to brands like Aesop and Camper, Malin+Goetz is keen to make every shop unique to its setting. To ensure this was the case, Tuckey assigned different project architects to each store.