Trump Is Beating Previous Presidents At Being Unpopular. President Trump reached a new low on FiveThirtyEight’s job-approval tracker this week, when his approval rating hit 41.3 percent. 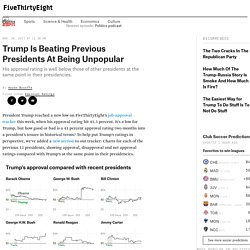 It’s a low for Trump, but how good or bad is a 41 percent approval rating two months into a president’s tenure in historical terms? To help put Trump’s ratings in perspective, we’ve added a new section to our tracker: Charts for each of the previous 12 presidents, showing approval, disapproval and net approval ratings compared with Trump’s at the same point in their presidencies. We’ve included every president back to Harry Truman — the first commander in chief for whom we have approval polls starting near the beginning of his administration. As with our calculation of Trump’s approval ratings, the ratings for past presidents are based on all the legitimate polls we can find — surveys from pollsters with higher-quality methodologies and better records of accuracy count more.

Polls are also adjusted for house effects. President Trump: shortcuts with executive orders? Every President is attracted by the idea of making public policy by unilaterally issuing an executive order — sounds easy and attractive. 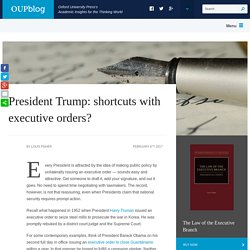 Get someone to draft it, add your signature, and out it goes. No need to spend time negotiating with lawmakers. The record, however, is not that reassuring, even when Presidents claim that national security requires prompt action. When Nixon’s Henchmen Plotted to Assassinate a Journalist with LSD. For those who think the future of press freedom is facing unprecedented challenges, a reminder of the time Nixon aides hatched a plot to kill a troublesome journalist. 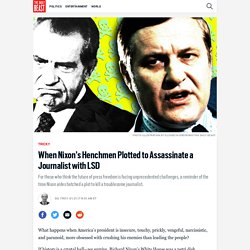 What happens when America’s president is insecure, touchy, prickly, vengeful, narcissistic, and paranoid, more obsessed with crushing his enemies than leading the people? If history is a crystal ball—we survive. Richard Nixon’s White House was a petri dish breeding deceit and distrust. It teemed with espionage and enemies’ lists, wiretapping and burglaries, leaked national secrets and even murder conspiracy. Member Home. The Real Ronald Reagan, as Portrayed by Phil Hartman. Www.fas.org/sgp/crs/secrecy/R42670.pdf. Www.fas.org/programs/ssp/nukes/publications1/WarPlanIssueBrief2010.pdf. Noam Chomsky: Obama's Attack on Civil Liberties Has Gone Way Beyond Imagination. Photo Credit: By Duncan Rawlinson [CC-BY-2.0 ( via Wikimedia Commons April 26, 2013 | Like this article? 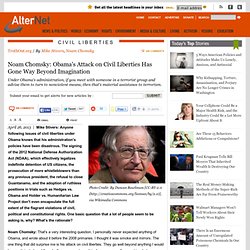 Join our email list: Terror in the Mirror. Who are the terrorists, and can you know one when you see one? 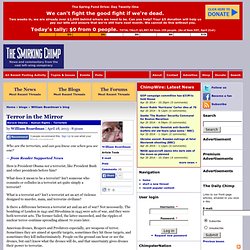 — from Reader Supported News How is President Obama not a terrorist, like President Bush and other presidents before him? Bush Used the IRS, FBI, CIA and Secret Service to Go After Opponents. Former US President George W. Bush thanks US President Barack Obama during a dedication ceremony at the George W. Bush Library and Museum on the grounds of Southern Methodist University on April 25, 2013 in Dallas, Texas. The smarter the president, the better: Thomas Jefferson, Warren Harding and the importance of being an egghead. Do the smartest presidents make the best presidents? 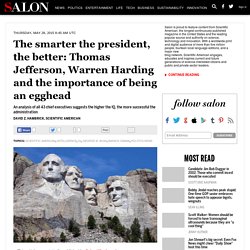 This question invariably emerges as a topic of spirited debate when the U.S. presidential election approaches. In 2004, former New York Times Executive Editor Howell Raines asked, “Does anyone in America doubt that Kerry has a higher IQ than Bush?” Citing Bush’s and Kerry’s scores on the Armed Services Vocational Aptitude Battery—an IQ-like test that the military uses to determine whether a recruit is qualified for enlistment—the conservative pundit Steve Sailer countered that there was no doubt that, in fact, Bush had the higher IQ. And the chatter about IQ has begun for next November’s election.