Oliver Sacks, Stephen Jay Gould, Freeman Dyson, Rupert Sheldrake, Stephen Toulmin, and Daniel Dennett discuss metaphysics in 1993. Millennial. From The Center for Investigative Reporting. Home. Between the Liner Notes. Stuff You Should Know: The Podcast. Podcasts. Our privacy promise The New Yorker's Strongbox is designed to let you communicate with our writers and editors with greater anonymity and security than afforded by conventional e-mail. 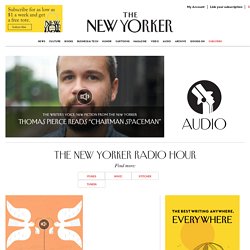 When you visit or use our public Strongbox server at The New Yorker and our parent company, Condé Nast, will not record your I.P. address or information about your browser, computer, or operating system, nor will we embed third-party content or deliver cookies to your browser. Strongbox servers are under the physical control of The New Yorker and Condé Nast. Strongbox is designed to be accessed only through a “hidden service” on the Tor anonymity network, which is set up to conceal both your online and physical location from us and to offer full end-to-end encryption for your communications with us. This provides a higher level of security and anonymity in your communication with us than afforded by standard e-mail or unencrypted Web forms. Invisibilia. Podcast – The Tim Ferriss Show. The Tim Ferriss Show is generally the #1 business podcast on all of iTunes, and it’s been ranked #1 (of all 300,000+ podcasts) on many occasions. 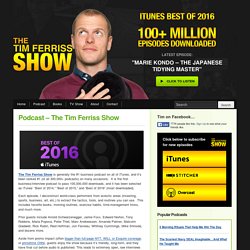 It is the first business/interview podcast to pass 100,000,000 downloads, and it has been selected as iTunes’ “Best of 2014,” “Best of 2015,” and “Best of 2016” (most downloaded). 99% Invisible. FoundMyFitness. Peter Levenda Podcast Roundup. Peter Levenda is best known as the author of the Sinister Forces series, a seminal trilogy on the occult history of the United States. 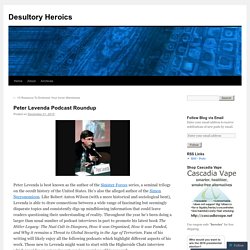 He’s also the alleged author of the Simon Necronomicon. Like Robert Anton Wilson (with a more historical and sociological bent), Levenda is able to draw connections between a wide range of fascinating but seemingly disparate topics and consistently digs up mindblowing information that could leave readers questioning their understanding of reality. Throughout the year he’s been doing a larger than usual number of podcast interviews in part to promote his latest book The Hitler Legacy: The Nazi Cult in Diaspora, How it was Organized, How it was Funded, and Why it remains a Threat to Global Security in the Age of Terrorism. Fans of his writing will likely enjoy all the following podcasts which highlight different aspects of his work. Anthony Peake – What Must We Learn to Escape the Era of the Ontological Movie? 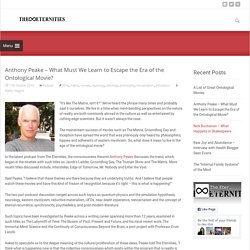 We’ve heard the phrase many times and probably said it ourselves. We live in a time when mind-bending perspectives on the nature of reality are both commonly abroad in the culture as well as entertained by cutting-edge scientists. But it wasn’t always the case. The mainstream success of movies such as The Matrix, Groundhog Day and Inception have spread the word that was previously only heard by philosophers, hippies and adherents of eastern mysticism.

So, what does it mean to live in the age of the ontological movie? On Location. Anti-Media Radio. Help support UCY by shopping through our Amazon link or by donating through PayPal - Address: Contact.UCYTV@gmail.com. 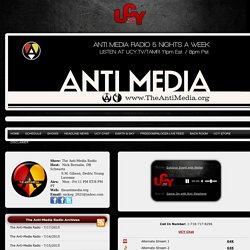 Taoism, Gravity-Defying Glorious D-Cups. 7 addictive podcasts that aren't Serial. Everything good — including the first season of Serial — must come to an end. 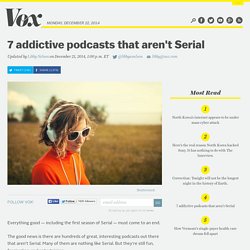 The good news is there are hundreds of great, interesting podcasts out there that aren't Serial. Many of them are nothing like Serial. But they're still fun, fascinating, and entertaining. Here are seven recommendations from podcast-listeners at Vox Media. (We're not recommending This American Life, Planet Money, or RadioLab because they're so well-known, but if you liked Serial, you'd probably like those too. 1) 99% Invisible 99% Invisible is a podcast about design, told in a medium with no pictures.

The basics: Hosted by Roman Mars. 2) The Memory Palace The Memory Palace tells stories from the past that you've never heard — the history of eating lobsters, or the riots that started in 1964, or about the fear of being buried alive that people had in the past. About. On January 13, 1999, a girl named Hae Min Lee, a senior at Woodlawn High School in Baltimore County, Maryland, disappeared. 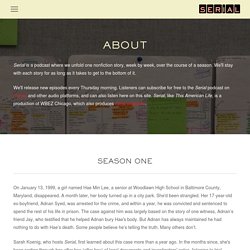 A month later, her body turned up in a city park. She'd been strangled. Her 17-year-old ex-boyfriend, Adnan Syed, was arrested for the crime, and within a year, he was convicted and sentenced to spend the rest of his life in prison. The case against him was largely based on the story of one witness, Adnan’s friend Jay, who testified that he helped Adnan bury Hae's body. But Adnan has always maintained he had nothing to do with Hae’s death. Media Roots Radio – Obama's Syrian War. A_Discussion_of_Autonomous_Weapons.mp3?d13a76d516d9dec20c3d276ce028ed5089ab1ce3dae902ea1d01ce8031d1c15d755b&c_id=5576272.