Mille Feux, Matière Noire, and Dans la Peau by Louis Vuitton. I finally made my way to the Louis Vuitton boutique here in Melbourne. 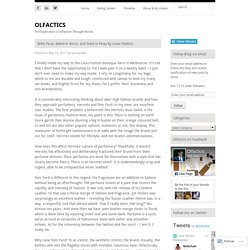 It’s not that I don’t have the opportunity to, for I walk past it on a weekly basis – I just don’t ever need to make my way inside. I rely on Longchamp for my bags, which to me are durable and tough, reinforced with canvas to hold my many uni books, and English firms for my shoes, for I prefer their sturdiness and non-brandedness.

It is considerably interesting thinking about über high fashion brands and how they approach perfumery. Hermès and Tom Ford, in my view, are excellent case studies. The first problem a behemoth like Hermès must tackle is the issue of garishness. Jasmin et Cigarette by Etat Libre D’Orange. Do not expect a tobacco fragrance. 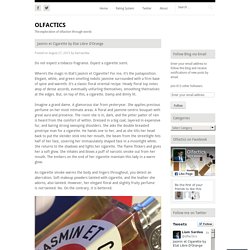 Expect a cigarette scent. Where’s the magic in Etat’s Jasmin et Cigarette? For me, it’s the juxtaposition. Elegant, white, and green smelling indolic jasmine surrounded with a firm base of spice and warmth. It’s a classic floral oriental recipe: Heady floral top notes atop of dense accords, eventually unfurling themselves, smoothing themselves at the edges. Imagine a grand dame.

The Fresh Scents of the 70s Part 2: Eau de Rochas ~ Vintages. In more than one respect the 1970s have been pivotal in the acceptance and sanctioning of shared fragrances. 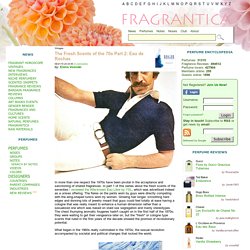 In part 1 of this series about the fresh scents of the seventies I reviewed the little-known Eau Libre by YSL, which was advertised indeed as a unisex offering. The flares on the pants worn by guys were directly competing with the wing-shaped tunics worn by women. Growing hair longer, smoothing hard edges and donning lots of jewelry meant that guys could feel totally at ease having a cologne that was really meant to enhance a human dimension rather than a sexualized one which was based on staid sex segregation and manly stereotypes.

The chest thumping aromatic fougeres hadn't caught on in the first half of the 1970s; they were waiting to get their vengeance later on, but the "fresh" or cologne type scents that ruled in the first years of the decade showed the promise of revolutionary potential. If you missed them, the previous part of this series can be found on these links. The Fresh Scents of the 1970s, Part 3: Eau de Campagne by Sisley ~ Vintages. Claude Monet, Poppies, 1873 We tend to think of "back to nature" as a movement that first stood on its legs in the 1990s, when concern for ecology and global warming first came into the collective conscience. 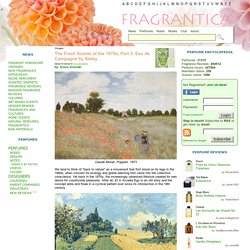 Yet back in the 1970s, the increasingly urbanized lifestyle created its own desire for countryside pleasures. After all, Et in Arcadia Ego is an old story and the concept ebbs and flows in a cyclical pattern ever since its introduction in the 19th century. Alfred Sisley, Grain fields on the hills of Argenteuil, 1873 The French, contrary to most Greeks, who invariably equate a summer vacation with seaside living or with residences atop a mountain (an association dictated by our specific terrain), are often opting to spend their vacations away from either mountain or seaside.

Camille Pissarro, The Church and Farm of Eragny, 1895 Camille Pissarro, Fields, 1877. Patchouli Nosy Be by Perris Monte Carlo 2014. Post by Portia Hiya Crew, You know when you see a new brand come on the scene and it just doesn’t move you to go out of your way to try it? 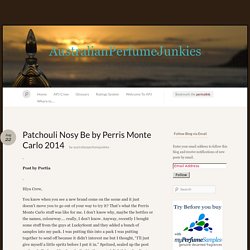 That’s what the Perris Monte Carlo stuff was like for me. I don’t know why, maybe the bottles or the names, colourway…. really, I don’t know. Anyway, recently I bought some stuff from the guys at LuckyScent and they added a bunch of samples into my pack. Giverny in Bloom by DSH Perfumes 2015 + GIVEAWAY. Post by Portia Hiya APJ, The set created for Denver Art Museum’s “In Bloom” exhibit: Giverny In Bloom La Danse des Bleus et des Violettes l’Opera des Rouges et des Roses Le Jardin Vert Dawn Spencer Hurwitz is one of the world’s best loved independent perfumers. 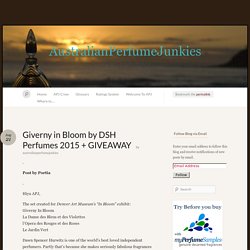 31 Rue Cambon by Chanel. In reflection, treating this blog as an academic exercise became a secondary function very quickly. 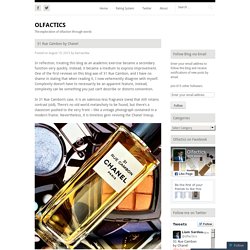 Instead, it became a medium to express improvement. One of the first reviews on this blog was of 31 Rue Cambon, and I have no shame in stating that when reading it, I now vehemently disagree with myself. Complexity doesn’t have to necessarily be an apparent feature, instead, complexity can be something you just can’t describe or distorts convention. Oriental Arabesque for Oud Palao by Diptyque. Fragrance review. Siena the Luminous: the New Scent by Evody ~ Niche Perfumery. The Parisian perfume house Evody Parfums released a new Collection d'Ailleurs fragrance, Blanc de Sienne, devoted to the bright sunlight of Italy. 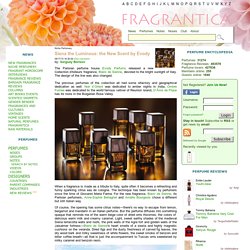 The design of the line was also changed. The previous perfumes of the collection all had some olfactory and geographical dedication as well: Noir d`Orient was dedicated to amber nights in India, Ombre Fumée was dedicated to the world famous vetiver of Reunion island, D`Âme de Pique has its roots in the Bulgarian Rose Valley. When a fragrance is made as a tribute to Italy, quite often it becomes a refreshing and funny sparkling citrus eau de cologne. The technique has been known by perfumers since the time of Giovanni Maria Farina. For the new fragrance, Blanc de Sienne, its Parisian perfumers, Anne-Sophie Behaghel and Amélie Bourgeois chose a different but still Italian way. Of course, the opening has some citrus notes—there's no way to escape from lemon, bergamot and mandarin in an Italian perfume.

Siena under the snow. Hermessence Brin de Reglisse Hermes perfume - a fragrance for women and men 2007. On my nose, the wonderful bombastic blast of sweet enigmatic liquorice is made docile with the herbaceous fleeting note of lavender with an underlying green note of hay. 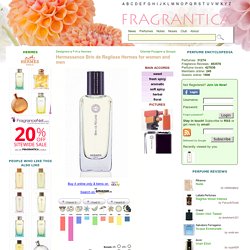 Conceived in 2007 by Jean-Clause Ellena for the Hermessence line by Hermès, Brin De Réglisse is described as: “A fragrance that blows cool and warm, dry and sweet. A landscape in Provence, dry earth, fragrant purple fields, the wind of the mistral… draped in a luxurious coat of mouthwatering licorice. The fragrance opens with the pure light of stylized lavender only to move into the velvety black of licorice.” The ‘provence’ that is France for Ellena is translated into an entirely different entity on my own terms. The scent of lavender and licorice evokes memories of tea and scones with licorice root tea and scones generously smothered in lavender scented chantilly cream. 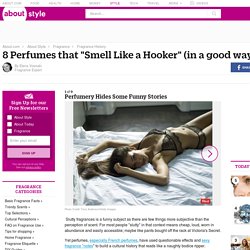 With the added bonus of being really interesting...not airheads; slightly repugnant, but magnetic too!! Am I Too Young for my Perfume? About.com Rating There's no term more loaded than "old lady scent" when it comes to perfume; rather significant given that personal smell is such a loaded issue to begin with. The fact that "old lady perfume" still ranks at the top of the derogatory list is telling...and absolutely rude (is it meant to insult older women?). Fair reader of 21, do you nevertheless catch yourself wanting to try that musky, powdery, heck, antiquated perfume, be it Guerlain's oriental Shalimar or Paloma Piccaso? Well, you run the risk of getting called names behind your back, whether you're 21 or 101! That is the uncontested power of smell.

Generally if you search among "aldehydic" or the "chypre" fragrance family you're bound to discover lots of roaring retro scents. The obsession of our society with youth makes skincare, cosmetic procedures, relentless exercise regimes and Photoshop the illusion of near immortality, so choosing something against the grain (i.e. Girly Guerlain – Review: Guerlain French Kiss and Eau de Lingerie. By Tara I consider my style to be more feminine than girly. I enjoy collecting jewellery, wearing dresses and painting my nails, however I’m adverse to anything cutesy and the colour I’m probably least drawn to is pink. French Kiss and Eau de Lingerie both seem to be quite far along the pink and girly end of the perfume spectrum. They come under the auspices of Guerlain’s Les Elixirs Charnels (Carnal Elixirs), the luxury line which also contains Gourmand Coquin and Oriental Brulant.

Scented Snippets: Tigerlily Perfumery UNRELEASED Project / First Impressions ~ Scented Snippets. I never do this, my friends. I felt that, presented with 10 perfumes all at once—it might help if I jotted down all my first impressions. To date, I have very few notes [those will arrive later, along with the video clips]; my instincts and nose are all I have to rely upon. In this spirit, I'd like to offer you my immediate, unvarnished feelings about these fragrances. Some have paintings affixed, in my mind. Others, songs, naturally. Sensual Orchid by Jerome Epinette for LM Parfums 2012. Post by Trésor Where I grew up the opportunities to express my authentic self were few and far between, it was not until later in life when I’d developed a certain degree self confidence that I was able to manifest who I truly was and see that very person staring back at me from the mirror for the first time.

It was in significant part through the exploration of exquisite fragrance and rituals of beauty that I found myself growing more comfortable in my own skin and experiencing a newfound symbiosis between body and spirit. The one thing I recall so vividly with a great deal of fondness from these early years is so simple, the pacifying aromas that would accompany the application of my skincare and makeup. With each breath inward I could feel myself transforming, the chrysalis breaking away and the gentle warmth of lambent sunbeams filtering though upon my skin. Photo Stolen Fragrantica. Angel by Thierry Mugler (1992) ~ Gender Bender. This is another in a series of fragrance reviews that asks, “How does fragrance transcend gender?” Hello and welcome to “Gender Bender,” an exploration of aroma, gender and scented freedom. Though by no means do I personally prescribe to fragrance having a gender, sociocultural stereotypes about masculinity and femininity often prevail at the fragrance counters.

Katy Perry Killer Queen: Oh So Sheer By Laurent LaGuernec 2014. Classic Opoponax by Von Eusersdorff 2015. Production of secret to Chanel N°5 under threat in Comoros. In a dense thicket in the middle of the impoverished Indian Ocean archipelago of the Comoros, Ibrahim Bacar is plucking tiny ylang ylang flowers. The barely visible yellow blossoms with an intoxicating aroma contain the oil that provides the distinctive scent in Chanel N°5, one of the world's best-selling fragrances.

Gentlewoman by Juliette Has A Gun + GIVEAWAY! Hi Crew, Having spent some time with the dashing Romano Ricci recently we were introduced to his latest offering, Gentlewoman. Youth-Dew by Josephine Catapano for Estée Lauder 1955. Tubereuse Criminelle by Christopher Sheldrake for Serge Lutens 1999. Serge Lutens L'Orpheline: fragrance review & sample draw. Much like the mysterious (and incestuous) half-sister in Leos Carax's radical adaptation of Melville's Pierre: or, the Ambiguities (1852) in "Pola X", the specter of the missing family member being visited while in almost somnambulist state, L'orpheline (the orphan girl), the latest Serge Lutens fragrance, becomes "un visage….sans age…une souffle, une presence" (a face…ageless…a breath, a presence) which disrupts the flow of a seemingly smooth, luxurious life with its secret of a tormented and deprived past.

New Fragrance. Innovator and Iconoclast. Bergamot in Fragrances and in Eau de Cologne: a Match made in Heaven. Cologne, Americans and Maghreb. Jail-time & Shalimar. Famous Fans.