Kamala Harris Is the Birthright Citizenship Candidate. Kamala Harris is not a vice-presidential running mate who makes me any more excited about the thought of voting for Joe Biden. 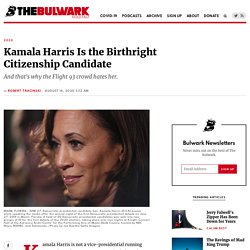 With Donald Trump reverting to the usual last-ditch stunt of a failing president—trying to impose his agenda by executive order—it doesn’t seem helpful for Democrats to embrace a woman whose own campaign for president was based on all the things she promised to impose by executive order. It’s almost as if Democrats don’t object to a strongman, so long as the strongman (or strongwoman) is someone they like. Yet I have to admit that as a matter of electoral politics, Harris probably won’t make many people less likely to vote for Biden, and thus she constitutes the safe, “do no harm” choice. Given that this is how Biden himself got the vice-presidential job, it seems appropriate. Kamala Harris is the birthright citizenship candidate. That makes her the “anchor baby” candidate, the poster child for “birthright citizenship.” Why is this important? Sen. Kamala Harris Roasts Terrified Trump Nominee With Simple Questions. Patrick Hovakimian has been nominated for General Counsel for the Office of the Director of National Intelligence, but it was his current work at the Department of Justice about which he seemed confused. 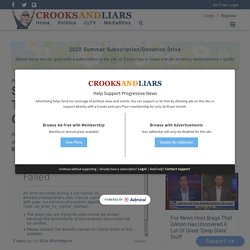 Senator Kamala Harris asked him some very simple yes/no questions about his knowledge of and/or involvement in the deployment of Stormtroopers extra-military troops to cities like Portland, to clamp down violently on peaceful demonstrators, protesting vile police brutality and racism against Black people. Instead of answering her directly, Hovakimian seemed shaky, sweaty, and confused.

Much like a person might seem if the answer to her questions might have gotten him into some trouble. SEN. HARRIS: In your current role at the Department of Justice, have you reviewed, approved, or supervised the deployment of federal law enforcement officers to these protests? HOVAKIMIAN: The deployment of federal law enforcement officers. SEN. HOVAKIMIAN: Senator, I'm a current DOJ official. SEN. SEN. How Donald Trump Jr learned the hard way not to tussle with ex-prosecutor Kamala Harris. Kamala Harris Joe Biden Exchange Blows in Second Democratic Debate 2019. ‘You don’t recall?’: Barr can’t say whether he’s spoken with White House about Mueller’s DOJ referrals — but emphatically refuses to recuse himself from them. Kamala Harris Earns Praise From Former Prosecutors For Barr Questioning. Democratic senator and 2020 candidate Kamala Harris garnered praise from legal experts on Wednesday after she appeared to stump Attorney General William Barr more than once during his congressional testimony on his handling of special counsel Robert Mueller’s Russia report. 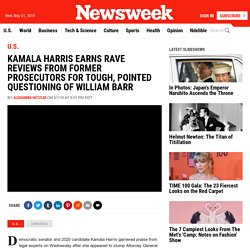 “This is what happens when Barr is asked a carefully worded question,” former federal prosecutor Renato Mariotti tweeted in response to the tense exchange. “He can't figure out how to answer it the way he wants to without outright lying, which would be a crime.” Watch Kamala Harris expertly nail Barr’s ‘clear conflict of interest’ as he tries to deflect blame on Mueller and Rosenstein. Kamala Harris’ Greatest 2020 Strength—And Biggest Weakness. A former client of Michael Avenatti alleges the celebrity lawyer secretly pocketed his money after helping him secure a settlement, then tried to lend him back some of the funds with 10 percent interest. 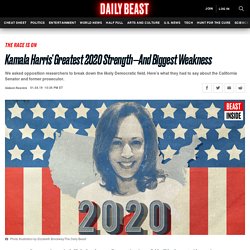 That client, Gregory Barela, made the allegations in a statement of claims filed with Judicial Arbitration and Mediation Services (JAMS), a private arbitration organization. Barela’s lawyer provided the claim, which is not public, to The Daily Beast. “Avenatti was operating his law firm in a Ponzi scheme like manner, taking settlement proceeds received for clients to pay off debts, pay the other individual Defendants’ salaries and bonuses, and fund his lavish lifestyle, while telling clients that the settlement proceeds had not been received or would be received at a later date,” says the claim, which also targets two other lawyers at Avenatti’s firm. Avenatti vehemently disputes the allegations. “Mr. Related in U.S. Stephen Larson, a former federal judge, is also representing Barela.

Kamala Harris Assembles Campaign Staff Of Unpaid California Prison Laborers. WASHINGTON—On the heels of yesterday’s announcement that she would be running for president, Sen. 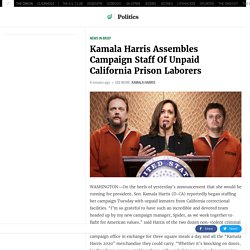 Kamala Harris (D-CA) reportedly began staffing her campaign Tuesday with unpaid inmates from California correctional facilities. “I’m so grateful to have such an incredible and devoted team headed up by my new campaign manager, Spider, as we work together to fight for American values,” said Harris of the two dozen non-violent criminal offenders who would reportedly work shifts of up to 72 hours out of her campaign office in exchange for three square meals a day and all the “Kamala Harris 2020” merchandise they could carry.