Reporting on the NSA Before It Was Cool. As a reporter who covered the National Security Agency before before the Edward Snowden documents brought it to the mainstream, Patrick Radden Keefe of The New Yorker says it would be easy to feel jealous of the journalists breaking those stories now. 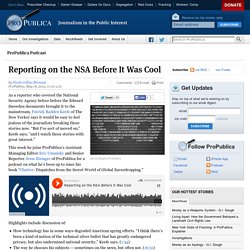 “But I’ve sort of moved on,” Keefe says, “and I watch those stories with great interest.” This week he joins ProPublica’s Assistant Managing Editor Eric Umansky and Senior Reporter Jesse Eisinger of ProPublica for a podcast on what he’s been up to since his book “Chatter: Dispatches from the Secret World of Global Eavesdropping.” Highlights include discussion of: Eric Cartman @ NSA. Apple's iPhone 6 And Smartwatch Are Awesome, NSA Reports.

FORT MEADE, Md. — On the heels of Apple’s Tuesday product launch for the iPhone 6, iPhone 6 Plus, and a new smart watch, drooling NSA officials clamored to convey widespread enthusiasm and support for the company’s “tantalizing” next generation of smart technology, Duffel Blog has learned. 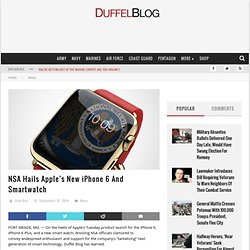 “These devices are just what the doctor ordered to put the spark back in our relationship with the American people,” NSA Director Adm. Mike Rogers told reporters, explaining that while Facebook and Twitter feeds are great and all, he and his analysts have been ready to take things to the next level for quite some time. “Don’t get me wrong,” Rogers said. “We love hearing about your kids’ soccer tournaments and seeing pictures from your dinners out at Chili’s.

I mean, we really LOVE it. “We want to know how many steps you take,” Rogers continued. Adm. “I mean, not that we don’t already know that stuff,” Rogers added, laughing uncomfortably. “Believe me,” Rogers said. Does the NSA have a quantum computer? According to the secret U.S. intelligence budget leaked by former National Security Agency contractor Edward Snowden, the Department of Defense spends $11 billion a year on cryptanalysis—almost certainly more than any other group in the world. 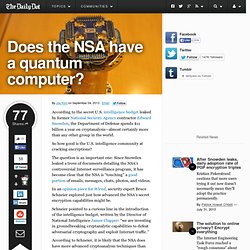 Gen. NSA Analysts Cyber-Stalk Love Interests...Sometimes. Lawsuit Prompts Release Of Some NSA Surveillance Documents. WASHINGTON — The Obama administration has given up more of its surveillance secrets, acknowledging that it was ordered to stop scooping up thousands of Internet communications from Americans with no connection to terrorism – a practice it says was an unintended consequence when it gathered bundles of Internet traffic connected to terror suspects. 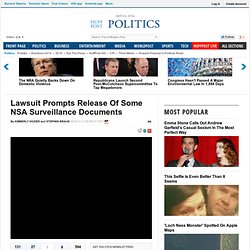 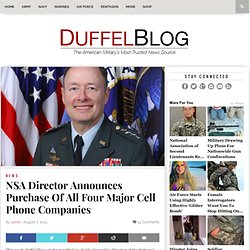 Keith Alexander, Director of the National Security Agency, for an exclusive interview about Edward Snowden’s defection and the Agency’s relationship with Congress. The following are some of the highlights of that interview. DB: Gen. Alexander thanks for taking time for this interview today. I know you’re very busy so let me get started. Gen. DB: Confused? DIRNSA: The first thing I want you to know is that everyone who works at NSA, be they military, civilians or contractors, are all US citizens just like you and I. I know people are angry when they hear we’re “collecting metadata” on people but I look around at our society and I just say, “Jesus Christ! DB: Well, that is a good point if maybe a little overly graphically made. DIRNSA: Here’s another one. DB: Wait, you have a Facebook account? DIRNSA: Yeah, Dave sent me a friend request a few years back and I remember him as a pretty cool guy in high school.

The NSA and Global Terror Alerts. Let us not get too worked up. 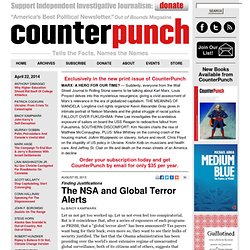 Let us not even feel too conspiratorial. But is it coincidence that, after a series of exposures of such programs as PRISM, that a “global terror alert” has been announced? Tax payers want bang for their buck; even more so, they want to see their hulks of security justified. The fact that the Obama administration has been presiding over the world’s most extensive regime of unwarranted global surveillance, both of its citizens and of others, suggests that some retort was bound to come in the face of Edward Snowden’s revelations.

In the game of espionage and counter-espionage, timing is everything. In recent days, Snowden has been occupying the high ground. XKeyscore: NSA tool collects 'nearly everything a user does on the internet' Head Of NSA Addresses Defcon Hackers Conference And Gets Heckled. Has the Gov't Lied on Snooping? Let's Go to the Videotape. Select an item above or click the video to begin Actually: A secret court order shows the NSA does collect phone records on millions of Americans. 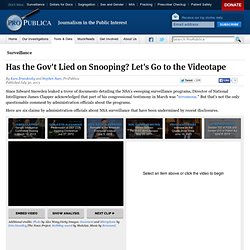 The secret court order, leaked by Snowden, shows that the NSA collects the metadata of all Verizon Business Network Services phone calls, on a daily basis. The court order says the metadata should include telephone numbers, routing information, the time the calls were made, how long the calls lasted, and the unique identifying numbers that pinpoint the device and the subscriber.

The Foreign Intelligence Surveillance Court has also reportedly ordered Sprint and AT&T to turn over the same data. In a letter written June 21, Clapper apologized for his "clearly erroneous" answer, saying he had been confused by Wyden's line of questioning. In an interview on June 8, Clapper also said "collect" means something different to intelligence officials.

Check Out the Floor Plans For the NSA's Huge New Data Center in Utah. NSA Says It Can’t Search Its Own Emails. In response to a public records request, the super-snooping spy agency says it doesn’t have the technology. 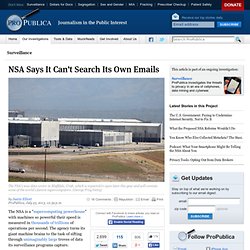 The NSA's new data center in Bluffdale, Utah, which is expected to open later this year and will contain some of the world's fastest supercomputers. (George Frey/Getty) Does the NSA Tap That? What We Still Don’t Know About the Agency’s Internet Surveillance. The telecom consulting firm TeleGeography's 2013 map of 244 active and planned submarine cable systems (TeleGeography/www.telegeography.com) But like other aspects [4] of NSA surveillance, virtually everything about this kind of NSA surveillance is highly secret and we’re left with far from a full picture. 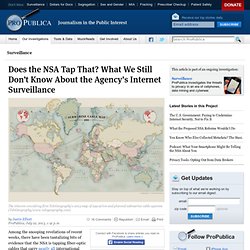 Is the NSA really sucking up everything? It’s not clear. The most detailed, though now dated, information on the topic comes from Mark Klein. Forget PRISM: FAIRVIEW is the NSA's project to "own the Internet" According to Thomas Drake, a former National Security Agency senior executive who blew the whistle on the agency’s reckless spending and spying in 2006, a previously unknown NSA surveillance program known as FAIRVIEW aims to “own the Internet.” Last month, former NSA contractor Edward Snowden leaked a series of PowerPoint slides to the Washington Post and the Guardian revealing that the agency was engaged in a large-scale Internet surveillance program, dubbed PRISM, that collects Americans’ chats, emails, photos, and videos.

One of the slides, only later released by the two papers, made reference to a group of additional “upstream” collection programs, including two named FAIRVIEW and BLARNEY, but gave no further details about their function. 11 disturbing things Snowden has taught us (so far) The Guardian reported on June 6 that, according to documents leaked by Edward Snowden, the Obama administration enabled the National Security Agency to collect caller information from Verizon through a “business records” provision of the Patriot Act, established under President George W. Bush. The government ordered Verizon to hand over call information on a daily basis, including the time, location and duration of calls. The Bush administration began collecting such information in October 2001 from AT&T, Verizon and BellSouth, which USA Today reported in 2006. NSA College Recruitment Drive Goes Quite Wrong. When the National Security Agency visited the University of Wisconsin last week to recruit language students to be the next generation of intelligence workers, events didn’t go smoothly as planned.

Journalist Madiha Tahir, currently taking a language course at the university, posted an audio recording of the NSA officials’ presentation to the student body going off the rails, as she and others tear the presenters to pieces with questions about Edward Snowden, the legality and ethics of their work, and if being a good liar is an asset for getting a job at the NSA. She has also posted a rough transcript on her blog. Her comment that sums up the whole debacle: “I’m just surprised that for language analysts, you’re incredibly imprecise with your language. And it just doesn’t seem to be clear.” Hello, NSA. James Clapper: Answer On NSA Surveillance To Congress Was 'Clearly Erroneous' WASHINGTON -- Director of National Intelligence James Clapper has apologized for telling Congress earlier this year that the National Security Agency does not collect data on millions of Americans, a response he now says was "clearly erroneous.

" Clapper apologized in a letter to Senate Intelligence Committee Chairwoman Dianne Feinstein. His agency posted the letter Tuesday on its website. Leaks by former NSA systems analyst Edward Snowden have revealed the NSA's sweeping data collection of U.S. phone records and some Internet traffic every day, though U.S. intelligence officials have said the programs are aimed at targeting foreigners and terrorist suspects mostly overseas. Clapper was asked during a hearing in March by Sen. This is, hands down, the scariest part of the NSA revelations. Forget PRISM, the National Security Agency's system to help extract data from Google, Facebook, and the like.

The more frightening secret program unearthed by the NSA leaks is the gathering and storing of millions of phone records and phone-location information of U.S. citizens. According to current and former intelligence agency employees who have used the huge collection of metadata obtained from the country's largest telecom carriers, the information is widely available across the intelligence community from analysts' desktop computers. The data is used to connect known or suspected terrorists to people in the United States, and to help locate them.

It has also been used in foreign criminal investigations and to assist military forces overseas. NSA leak shows how Obama misled the public on surveillance of Americans. Photo by Adam Berry/Getty Images Last week, President Obama claimed in an interview that the National Security Agency could not listen to Americans’ phone calls or read their emails.

Spinning Surveillance via Discredited NSA Talking Points. Barack Obama on Charlie Rose. James Bamford on NSA Secrets, Keith Alexander’s Influence & Massive Growth of Surveillance, Cyberwar. This is a rush transcript. Copy may not be in its final form. JUAN GONZÁLEZ: FBI Director Robert Mueller has vowed to take "all necessary steps" to hold whistleblower Edward Snowden responsible for exposing secret surveillance programs run by the National Security Agency. Speaking days after NSA contractor Snowden claimed responsibility for the leaks, Mueller confirmed to the House Judiciary Committee Thursday that the U.S. has launched a criminal investigation. What You Don't Know About The NSA Spying Program. PRISM part of a much larger government surveillance program.

NSA whistleblower exposes Obama's secrets. NSA Whistle-Blower Tells All - Op-Docs: The Program. NSA head: Surveillance program prevented dozens of terrorist attacks. WASHINGTON (AP) — Once-secret surveillance programs were crucial in enabling the U.S. government to thwart dozens of terrorist attacks, says the director of the National Security Agency in a forceful defense of spy operations that have stirred fears of government snooping and violations of privacy rights. Army Gen. Inside the NSA's Ultra-Secret China Hacking Group - By Matthew M. Aid. This weekend, U.S. President Barack Obama sat down for a series of meetings with China's newly appointed leader, Xi Jinping. We know that the two leaders spoke at length about the topic du jour -- cyber-espionage -- a subject that has long frustrated officials in Washington and is now front and center with the revelations of sweeping U.S. data mining.

The media has focused at length on China's aggressive attempts to electronically steal U.S. military and commercial secrets, but Xi pushed back at the "shirt-sleeves" summit, noting that China, too, was the recipient of cyber-espionage. But what Obama probably neglected to mention is that he has his own hacker army, and it has burrowed its way deep, deep into China's networks. Then, two weeks ago, White House officials leaked to the press that Obama intended to raise privately with Xi the highly contentious issue of China's widespread use of computer hacking to steal U.S. government, military, and commercial secrets.