Despite all that is heard, some always tryi to do some good

Officer Meets A Beaten-Up Toddler During Welfare Check, Decides To Give Her His Heart And His Home. An Arizona police officer and his wife have officially adopted a little girl after the officer helped her to get away from abuse. 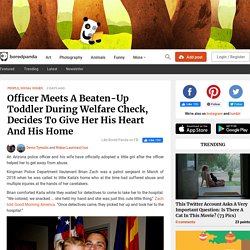 Kingman Police Department lieutenant Brian Zach was a patrol sergeant in March of 2018 when he was called to little Kaila’s home who at the time had suffered abuse and multiple injuries at the hands of her caretakers. Brian comforted Kaila while they waited for detectives to come to take her to the hospital.

“We colored, we snacked … she held my hand and she was just this cute little thing,” Zach told Good Morning America. Social workers respond to mental health calls in Dallas. After A Cop Pushed A Kneeling Woman, Black Female Police Officer Stands Up For Her. In the midst of the protests over the killing of George Floyd in Minnesota, footage of a male cop pushing a kneeling black woman to the ground emerged. 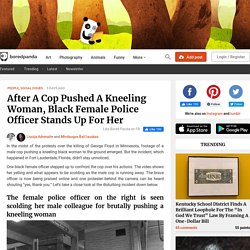 But the incident, which happened in Fort Lauderdale, Florida, didn’t stay unnoticed. One black female officer stepped up to confront the cop over his actions. The video shows her yelling and what appears to be scolding as the male cop is running away. The brave officer is now being praised online and one protester behind the camera can be heard shouting “yes, thank you.” Across the Country, a Few Brave Police Officers are Standing in Solidarity.

As demonstrations, protests, and riots continue across the United States, a few law enforcement officials are taking an admirable stance—kneeling, standing, and even marching in solidarity with the protestors. 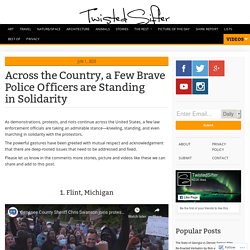 The powerful gestures have been greeted with mutual respect and acknowledgement that there are deep-rooted issues that need to be addressed and fixed. Please let us know in the comments more stories, picture and videos like these we can share and add to this post. 1. Officer Puts Knee on Protester's Neck, Fellow Officer Removes It. On the fifth night of protests in response to the death of George Floyd, a video has emerged of an officer using the same tactic used on Floyd on a protester: a knee to the neck. 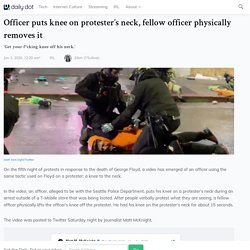 In the video, an officer, alleged to be with the Seattle Police Department, puts his knee on a protester’s neck during an arrest outside of a T-Mobile store that was being looted. After people verbally protest what they are seeing, a fellow officer physically lifts the officer’s knee off the protester. He had his knee on the protester’s neck for about 15 seconds. The video was posted to Twitter Saturday night by journalist Matt McKnight. Watch: Michigan sheriff and police didn’t use harsh tactics to control Flint Township’s protest — they laid down their batons and joined it.

Off-Duty Cops On A Date Night Stop A Restaurant From Being Robbed. A restaurant chain in Kentucky was about to be robbed when two married police officers out on a date night interceded. 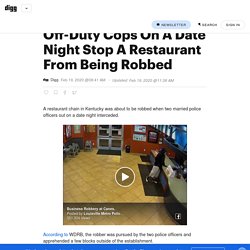 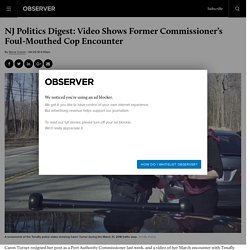 Tenafly Police Caren Turner resigned her post as a Port Authority Commissioner last week, and a video of her March encounter with Tenafly police that hit news sites on Tuesday shows why. Arriving at the scene after a car carrying her daughter was pulled over, Turner flashed her gold commissioner’s badge, tried to give police her Port Authority business card and described herself as a “concerned citizen and friend of the mayor.” “No, no, no. I’m involved. 23+ Times Police Surprised Everyone With Their Sense Of Humor.

A Mass. state trooper says higher-ups doctored arrest report on judge’s daughter. Ryan Sceviour, a Massachusetts State Police trooper, was halfway through an evening shift on Oct. 16 when a seemingly routine call came in about a car crash. 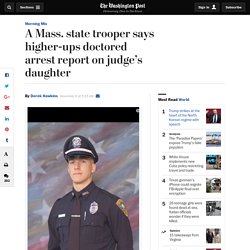 On a highway in Worcester, Mass., Alli Bibaud had slammed her Toyota Corolla into the guardrail. She and her passenger had survived, but Sceviour said the 30-year-old woman reeked of alcohol when he arrived on the scene. Cop Stops Woman for Broken Tail Lights, Instead of Ticket, He FIXED THEM—This is Public Service. 13-Year-Old Calls Police To Say He Wants To Run Away From Home, Cop Decides To Look Inside His Room. When 13-year-old Cameron Simmons from Sumter, South Carolina, called police officer Gaetano Acerra to tell him that he was planning to run away, the cop went to his house to investigate. 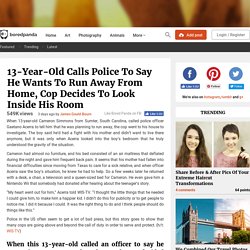 The boy said he’d had a fight with his mother and didn’t want to live there anymore, but it was only when Acerra looked into the boy’s bedroom that he truly understood the gravity of the situation. Show Full Text Cameron had almost no furniture, and his bed consisted of an air mattress that deflated during the night and gave him frequent back pain. Police Officer Ties Tie for College Student He Pulled Over for Speeding - Instead of Giving Him Ticket. Maybe it was the fashion police who pulled him over. 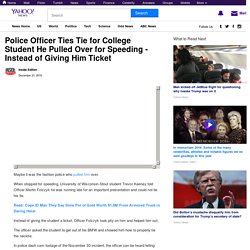 When stopped for speeding, University of Wisconsin-Stout student Trevor Keeney told Officer Martin Folczyk he was running late for an important presentation and could not tie his tie. Read: Cops ID Man They Say Stole Pot of Gold Worth $1.6M From Armored Truck in Daring Heist Instead of giving the student a ticket, Officer Folczyk took pity on him and helped him out. Police Play Santa For A Single Mom Who Stole Groceries To Feed Her Kids. These police officers in Orem, Utah, probably never thought they’d steal hearts -- especially not for helping out a shoplifter. 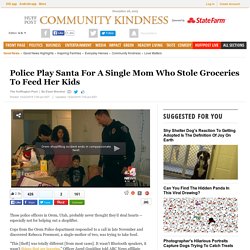 Cops from the Orem Police department responded to a call in late November and discovered Rebecca Freemont, a single-mother of two, was trying to take food. "This [theft] was totally different [from most cases]. It wasn't Bluetooth speakers, it wasn't things that are luxuries," Officer Jared Goulding told ABC News affiliate KTVX-TV. "It was food to feed her family that she couldn't afford otherwise. " Troubled by the mother’s plight, Goulding and other responding officers took a special interest in Freemont and even checked in on her at her low-income government housing complex where they made another astounding discovery.

Two New Jersey state troopers have been praised for going above and beyond the call of duty -- with the help of a few pizza pies. Watch: Vacationing Swedish cops show NYPD officers how to subdue suspects without hurting them. Four vacationing Swedish police officers helped out after two homeless men began fighting on a New York City subway – and showed it’s possible to subdue violent suspects without hurting them. The officers — Samuel Kvarzell, Markus Asberg, Eric Jansberger and Erik Naslund — were riding an uptown No. 6 train Wednesday on their way to see “Les Miserables” when they responded to the subway driver’s call for help, reported the New York Post. A bystander began recording cell phone video after the officers pulled the pair apart. The video shows one of the brawlers sitting calmly on the floor, flanked by two of the Swedish police officers, while two others kneel on the other man – who is more unruly – to hold him face-down on the floor.

“How do you feel?” One of the officers asks the seated man, who says he feels fine. The other man struggles, but the pair of officers calmly keep him pinned to the floor. Jesse Kidder, Police Officer, Takes Down Murder Suspect Without Firing A Shot. Michael Wilcox A rookie officer in Ohio was caught on video refusing to shoot the suspect wanted in two murders -- even as the distraught man repeatedly charges him and demands to be shot. In a scene captured by his body camera on Thursday, New Richmond police officer Jesse Kidder is shown aiming his weapon at 27-year-old Michael Wilcox, who allegedly killed both his girlfriend and best friend in separate locations. Several times, Wilcox rushes at Kidder. Each time, Kidder runs backward while keeping his handgun aimed at the suspect, urging him to surrender.

"Shoot me! " "No man," Kidder replies. At one point, Kidder appears to fall to the ground but remains in control of the situation, ordering the suspect to back up. Police Officers Skip The Ticket, Instead Buy Car Seat For Family Who Couldn't Afford One. For these cops, upholding the law also meant having compassion for their community members. Officers James Hodges and Jason Pavlige of Michigan, responded to a call back in February, from a local McDonald's employee, who was concerned for the safety of a child whose family had just ordered food, Fox 17 reported. After arriving at the scene, they found a 10-month-old baby sitting freely on her mother's lap in the passenger seat of a car. Though that would've typically resulted in a citation, the officers put their money together instead, and while Pavlige stayed with the family, Hodges went to the local Walmart and bought the family a car seat.

What's it like to be a PCSO? It’s important to preface any examination of a ‘typical day’ as a Police Community Support Officer (PCSO) with the reminder that the role responsibilities are remarkably varied. The role is interpreted, empowered, and utilised in different ways across each individual constabulary, which is reflected in a number of ways, from the different powers invested with PCSOs by a Chief Constable, to the uniforms that they wear during the course of duty. For example, some PCSOs carry handcuffs and others do not. Communities will have individual needs that you will need to tailor yourself to – a normal day for a town based officer will be noticeably different from that of a rural based officer.

This necessity to adapt to ever-changing situations, demands, and challenges is one of the most rewarding elements of the role. Equally, there are some key core functions that will always be a constant for any officer. Mom of two autistic boys stunned by Florida deputy’s kindness after she’s ripped off on Craigslist. Calif. cop may be fired for giving suicidal student water instead of Tasing him. Police Officer Pulls Young Mom Over To Give Her A Ticket, Buys Her A Car Seat Instead. Observant NYPD Cop Notices Woman Choking In Her Car, Saves Her Life. Police chief protests police brutality, is publicly chastised. As tensions between police forces and civilians run high after the fatal shooting of Ferguson, Missouri, teenager Michael Brown at the hands of Officer Darren Wilson, some cops have spoken out against the brutal force employed by their colleagues.