‘This man is dumb’: Trump ignites mockery after claiming there are ‘many per capitas’ ‘I tested positively — in another sense’: Trump fumbles trying to explain he doesn’t have COVID-19. The Coronavirus According to Donald Trump. [Editor’s note: The timeline in this post will be continuously updated with President Trump’s latest statements about Coronavirus.] 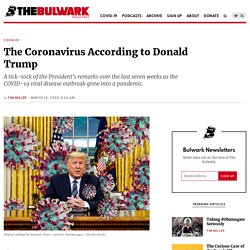 One of Donald Trump’s superpowers is that his neverending firehose of corruption, lies, gaffes, and buffoonish behavior gushes out a flood of information that neither the human brain nor the news media is capable of comprehending or contextualizing. Last night this superpower may have finally met its kryptonite as the reality of the coronavirus hit home in one dizzying evening. As a hoarse President Trump addressed the nation, a stunning and frankly scary onslaught of news about the virus exploded onto everyone’s smartphones: An NBA game mysteriously canceled. A travel ban on foreign nationals coming from Europe goes into effect. Jared Kushner is now in charge. The contrast between the severity of breaking news and the narcissistic and cavalier treatment the pandemic has received from the White House is so sharp, it may pierce even the Fox News bubble.

Trump Escalates Baltimore Attacks With Rambling, 3-Hour Press Conference Tearing Into Edgar Allan Poe. WASHINGTON—Criticizing the 19th-century writer as a “death-obsessed weirdo with very little literary talent,” President Trump doubled down on his attacks against the city of Baltimore Monday by tearing into Edgar Allan Poe during a rambling, three-hour press conference on the White House lawn. 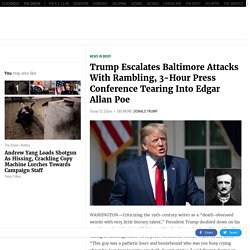 “This guy was a pathetic loser and boozehound who was too busy crying about his lost love to write any half-decent stories,” said Trump during an oftentimes discursive and meandering speech that mocked the “disgusting, cousin-marrying hack” for his “boring” short stories and poems. “Everyone says The Raven, okay? But a raven? Not very scary. Not scary at all. Trump insists his tense meeting with Dem leaders went great after throwing Oval Office tantrum. The 4 most humiliating moments for Donald Trump in his wild White House meeting with Dem leaders. Nancy Pelosi and Chuck Schumer hammer Trump over border wall lies in off-the-rails Oval Office meeting. 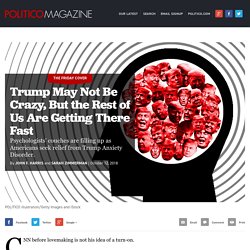 But she can hardly turn it off—engrossed as she is in the latest unnerving gyrations of Washington. Story Continued Below Who else to blame but Donald Trump? A president who excites hot feelings in many quarters has cooled them considerably in the bedroom of a Philadelphia couple, who sought counseling in part because the agitated state of American politics was causing strain in their marriage.

The couple’s story was relayed to POLITICO by their therapist on condition of the couple's anonymity. During normal times, therapists say, their sessions deal with familiar themes: relationships, self-esteem, everyday coping. Empirical data bolster the anecdotal reports from practitioners. These findings suggest the political-media community has things backward when it comes to Trump and mental health.

In other words: He’s not crazy, but the rest of us are getting there fast. ‘I’m not a baby. I know’: Donald Trump snaps before admitting to ’60 Minutes’ he doesn't know if North Korea is closing nuclear sites. 'I'm president and you're not': Trump's '60 Minutes' interview goes off the rails when Stahl demands answers on immigration and Dr. Ford. - The Washington Post. - The Washington Post. Trump's Greatest Nightmare Is Here: Low Ratings. About Last Night…

Lesley Stahl: Do you still think that climate change is a hoax? 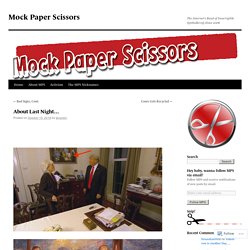 President Donald Trump: I think something’s happening. Something’s changing and it’ll change back again. I don’t think it’s a hoax, I think there’s probably a difference. But I don’t know that it’s manmade. I will say this. Well, that was a train wreck, and all you need to know is that speculation increased that Defense Secretary Mattis may be leaving sooner rather than later. Lesley Stahl: “I’m gonna try one more time.”Trump: “Lesley, you don’t have to try again. And we are so totally eff’ed in the dark. Sharing Means Caring, fool! Like this: Like Loading... Related Thanks A Lot, Leslie Stahl The Death of the Media Before he was sworn in, Comrade Stupid told our failed media what his game plan was, and they ignored him: "President Donald Trump told the veteran journalist Lesley Stahl of the CBS program "60 Minutes" that he bashes the press to "demean" and "discredit" reporters… In "4th Reich" Q.E.D., Bitchez! 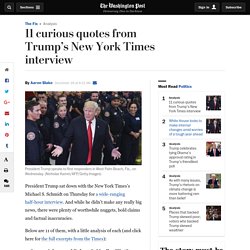 (Nicholas Kamm/AFP/Getty Images) President Trump sat down with the New York Times's Michael S. Schmidt on Thursday for a wide-ranging half-hour interview. And while he didn't make any really big news, there were plenty of worthwhile nuggets, bold claims and factual inaccuracies. Below are 11 of them, with a little analysis of each (and click here for the full excerpts from the Times): 1. This might have been the newsiest bit from the interview. Trump: 'It's a shame what's happened with the FBI' President Trump said on Dec. 14 that the FBI is "a very sad thing to watch," but pledged to rebuild the agency to make it "bigger and better than ever.

" 2. And here's the other side of the coin. [The fight for control over the special counsel's Russia investigation] 3. 4. I've long thought Trump believed this, but it's remarkable to hear him say it out loud. 5.