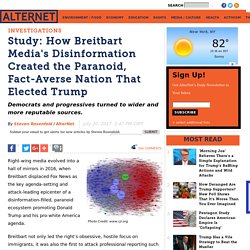 Sasha Grey on Being Caught in a Russian Propaganda War. The acclaimed ex-porn star turned Hollywood actress and author opens up about her eclectic career, President-elect Trump, and her Russian nightmare. 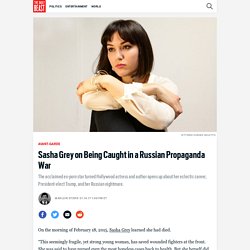 On the morning of February 18, 2015, Sasha Grey learned she had died. “This seemingly fragile, yet strong young woman, has saved wounded fighters at the front. She was said to have nursed even the most hopeless cases back to health. But she herself did not return from the front,” read her obituary. It was, by most accounts, a gruesome end. The tragic tale spread like wildfire across VK (VKontakte), Russia’s answer to Facebook boasting close to 400 million users. Here's A Stack Of Anti-American Propaganda From North Korea. Every country in the world has a fair portion of its history steeped in bloodshed, war & a blatant disregard for human life - none of us are truly guilt free. 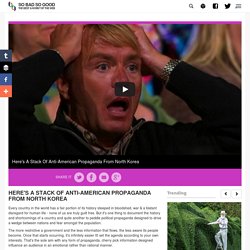 But it's one thing to document the history and shortcomings of a country and quite another to peddle political propaganda designed to drive a wedge between nations and fear amongst the population. The more restrictive a government and the less information that flows, the less aware its people become. Once that starts occurring, it's infinitely easier t0 set the agenda according to your own interests.

That's the sole aim with any form of propaganda, cherry pick information designed influence an audience in an emotional rather than rational manner. PNAS 2016 Del Vicario 554 9. George Orwell on the 7 Ways Politicians Abuse Language to Deceive You. What words would you use to describe this face? 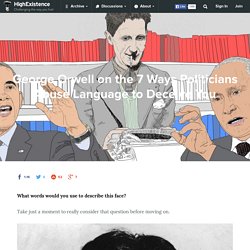 Ideas & Trends - War and Remembrance - Sometimes Heroism Is a Moving Target. SO it turns out that the feel-good story of the Iraq war, the rescue of Pfc. 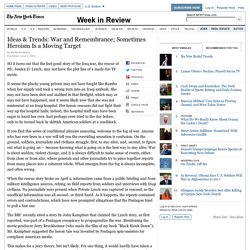 Jessica D. Lynch, may not have the plot line of a made-for-TV movie. It seems the plucky young private may not have fought like Rambo when her supply unit took a wrong turn into an Iraqi ambush. She may not have been shot and stabbed in that firefight, which may or may not have happened, and it seems likely now that she was not mistreated at an Iraqi hospital. What Do We Really Know About Osama bin Laden’s Death? Mark Bowden was watching a ballgame — the Phillies versus the Mets — on the night of May 1, 2011, when the network cut away to President Obama in the East Room of the White House. 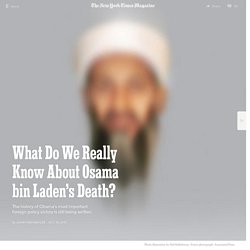 “Tonight,” the president said, ‘‘I can report to the American people and to the world that the United States has conducted an operation that killed Osama bin Laden, the leader of Al Qaeda and a terrorist who’s responsible for the murder of thousands of innocent men, women and children.’’ Five minutes or so after the president wrapped up his brief remarks, as thousands of Americans gathered in front of the White House and at ground zero chanting ‘‘U-S-A! Propaganda and Fahrenheit 9/11. This is a 14,000-word propaganda analysis of Michael Moore's film Fahrenheit 9/11 in PDF format. 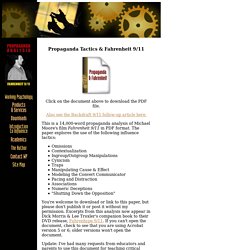 The paper explores the use of the following influence tactics: Omissions Contextualization Ingroup/Outgroup Manipulations Cynicism Traps Manipulating Cause & Effect Modeling the Convert Communicator Pacing and Distraction Associations Numeric Deceptions "Shutting Down the Opposition" You're welcome to download or link to this paper, but please don't publish it or post it without my permission. 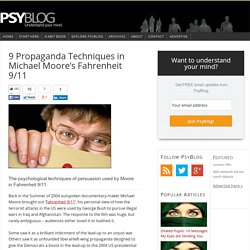 Back in the Summer of 2004 outspoken documentary-maker Michael Moore brought out ‘Fahrenheit 9/11‘, his personal view of how the terrorist attacks in the US were used by George Bush to pursue illegal wars in Iraq and Afghanistan. Nazi Propaganda Left Life-long Mark On German Children: Study. BERLIN (AP) — Anti-Semitic propaganda had a life-long effect on German children schooled during the Nazi period, leaving them far more likely to harbor negative views of Jews than those born earlier and later, according to a study published Monday. 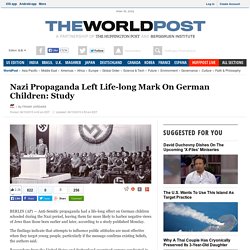 The findings indicate that attempts to influence public attitudes are most effective when they target young people, particularly if the message confirms existing beliefs, the authors said. Researchers from the United States and Switzerland examined surveys conducted in 1996 and 2006 that asked respondents about a range of issues, including their opinions of Jews. The polls, known as the German General Social Survey, reflected the views of 5,300 people from 264 towns and cities across Germany, allowing the researchers to examine differences according to age, gender and location. Dr. Evil is defending Big Oil — is anyone defending climate the same way? There was a story in The New York Times last October that didn’t get the attention it deserved. 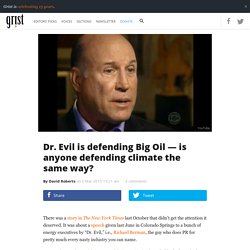 It was about a speech given last June in Colorado Springs to a bunch of energy executives by “Dr. Evil,” i.e., Richard Berman, the guy who does PR for pretty much every nasty industry you can name. Berman is notorious. This Boston Globe investigation is probably the best single-serving account of his history and tactics, but you can find similarly damning stories in The New York Times, Mother Jones, 60 Minutes, and many other outlets.

The Fake Terror Threat Used To Justify Bombing Syria. As the Obama Administration prepared to bomb Syria without congressional or U.N. authorization, it faced two problems. The first was the difficulty of sustaining public support for a new years-long war against ISIS, a group that clearly posed no imminent threat to the “homeland.” A second was the lack of legal justification for launching a new bombing campaign with no viable claim of self-defense or U.N. approval. The solution to both problems was found in the wholesale concoction of a brand new terror threat that was branded “The Khorasan Group.” After spending weeks depicting ISIS as an unprecedented threat — too radical even for Al Qaeda!

— administration officials suddenly began spoon-feeding their favorite media organizations and national security journalists tales of a secret group that was even scarier and more threatening than ISIS, one that posed a direct and immediate threat to the American Homeland. DEATH-MATCH: Hitler's Luftwaffe VS. P-47 Thunderbolts in Europe (720p) » “Everything Is Propaganda”?: Some Ongoing Conversation The Christian Humanist. “Everything Is Propaganda”? : Some Ongoing Conversation Nathan P. Gilmour , 6 February 2014. If you don’t listen to the Theology Nerd Throwdown from Homebrewed Christianity, you’re missing out on a fun podcast. Propaganda Posters. U.S. James Foley Beheading Video Has Play-Acting Portions – Video Experts Say.

WW2 P-51 Mustang, P-47 Dogfights - US Airforce Fighter Escorts - Air Force Pilots. Mission to Rabaul - Nonstop action in the South West Pacific 1943. It’s Not Just the Mainstream Media That Is Scripted to Manufacture Consent, so Are Our Politicians. I. Manufacturing Consent. Rule from the Shadows – The Psychology of Power Part 1. Matthew Alford’s “Reel Power” and Hollywood Propaganda.

Media Head Games Exposed! CNN Caught Using Neuro-Linguistic Programming to Influence Syrian Conflict. Boris Efimov: Two anti-Nazi posters by the Russian artist mocked Goebbels and Goring. The Vault is Slate's history blog. Like us on Facebook, follow us on Twitter @slatevault, and find us on Tumblr. How the Number Three Cigarette in America Made Heuer a Household Name.

Popaganda. Terrorist Attacks in the U.S.: Totalitarianism vs. Civil War I-II. Massive Disinformation Propaganda Works in US. Woolwich and Terror: We Must Resist Having Our Enemies Constructed For Us.