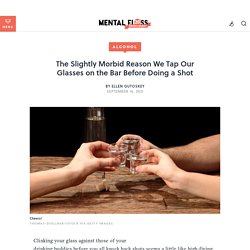 And that’s pretty much what the most popular theory behind the tradition boils down to. In ancient times, people just passed around a single cup—so when that got phased out in favor of separate receptacles, tapping them together maintained that same sense of kinship. And if you have any experience taking shots in a bar (or really just being in a bar), you may have noticed another trend: After the cheers, people often tap their glasses on the bar or table before drinking.

As with regular toasts, it’s not clear exactly when, where, or why this custom began. But these days, most drinkers will cite one of two common reasons behind it. A Drink-by-Drink Tour of DC’s Most Historic Cocktail Bars. George Washington is known for distilling whiskey in his backyard, Ike for his bathtub gin and FDR for his rum swizzles. 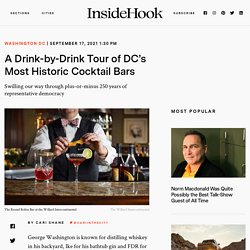 “There’s liquid history” all over DC, says cocktail historian Derek Brown, owner of Columbia Room. “Whether it was JFK at Martin’s Tavern or Abraham Lincoln at the Willard, it’s just amazing the things that have happened, and you can tour DC drink by drink.” In the 51st state, you can propose at the tavern where JFK asked Jackie for her hand in marriage and drink Mint Juleps at the “Oval Office of bars.”

No More Than a Litre of Wine a Day, Recommends a 1950s French Sobriety Poster. Cocktail Den + Cravings Kitchen. Bowen House Dallas. Double Wide – A fine Dallas Bar with drinks that hit harder than your dad! Order Spirits Online. Pegu Club Has Closed. This Is Why It Mattered. News came last week that Audrey Saunders’ Pegu Club, that elegant atelier of modern cocktails, has closed its glass front door for good. 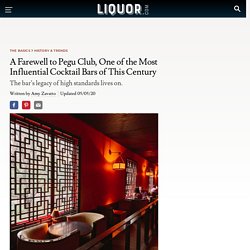 After being shuttered for nearly two months like every other bar in New York City, its permanent closure didn’t come as a great surprise, but I still find my heart aching—over the loss of something special and beautiful but also in recognizing what Pegu meant and how it changed the way we drink and think. And, perhaps, how we treat each other. “What I remember and what influenced me most is her really exacting recipe development and process, which was so intense. I still think about it and marvel that she was so patient and so smart. She would never let a recipe across her bar that was not absolutely perfect and better than everybody else’s,” says St. J.G. Melon and the Excellence of the Old-School Preppy Bar. I’ve walked through a frozen wasteland to get an Au Cheval and journeyed across the country to go Animal Style. 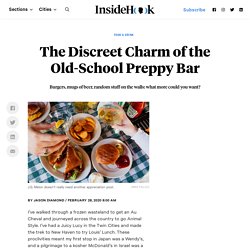 I’ve had a Juicy Lucy in the Twin Cities and made the trek to New Haven to try Louis’ Lunch. These proclivities meant my first stop in Japan was a Wendy’s, and a pilgrimage to a kosher McDonald’s in Israel was a must. I’ve taken advice from sages (read: “best burger” lists on the Internet) and tried everything high and low. I’ve had burgers on the beach (Rippers, baby!) , at the top of a mountain, and once ate Shake Shack in a graveyard (long story). The burger is something we’ve put too much thought into, and frankly, it’s taken the enjoyment out of eating them. There was one exception, though. J.G. For years, the Upper East Side spot has been hallowed ground for burger lovers. I’m usually a big fan of the slaughtering of sacred cows and then tossing the meat on the grill. The truth is that whenever I go to J.G. 7 Signs Your Bartender Really Knows What They’re Doing.

A bartender’s job is a balancing act. 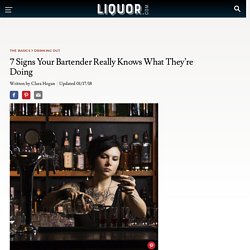 It requires juggling an assortment of drink orders and patron personalities, all while remaining calm, friendly and focused. It’s not a job for the easily frazzled. The Age of the Imitation Dive Bar. Late last year, Dolly’s Swing and Dive, a self-proclaimed dive bar, opened amongst the luxury condominiums of Williamsburg, Brooklyn. 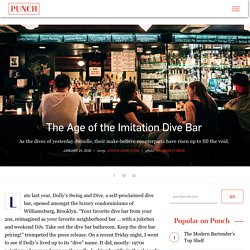 “Your favorite dive bar from your 20s, reimagined as your favorite neighborhood bar … with a jukebox and weekend DJs. Take out the dive bar bathroom. Keep the dive bar pricing!” Trumpeted the press release. Texas: Ginny’s Little Longhorn Saloon (Austin) from The Best Dive Bar in Every State. The World's Best Bars - Genre Bar Cocktail. The Black Bartenders That Created the Dive Bar. Wine vs. Health in 2019 (OMG We're All Going To Die!) One Woman's Noble Mission to Document Madrid's No-Frills Bars. True Laurel Bar From David Barzelay and Nicolas Torres. 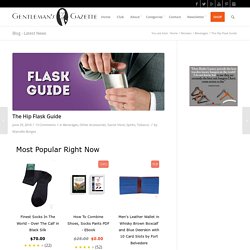 It’s a traditional men’s accessory, but it definitely has its DOs and DON’Ts. The Gentleman’s Gazette prepared this little guide to help you handle this classic accessory with care. Hip flasks, also known simply as a flask, is a container specifically designed to hold a portion of hard liquor that is carried in a pocket.

O.O. And then the party started/And there were ten flasks Removed from the hip/In that many seconds And the way they drank it/One would get the idea. California Approves 4 a.m. Last Call, Everyone Wins. How to Pull off Drinking Alone Without Looking Sad. 21 Best Bars in America 2018 - Where to Drink in the USA This Year. Remembering The Knox Street Pub, Dallas' Home For Counterculture. Of Beans and Men: L.A.’s Famous Dive Barney’s Beanery. Five-Cent Beers and Hard-Drinking Horses: 15 Saloon Photos Reveal the Real Wild West. 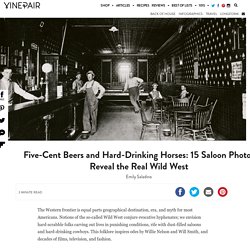 Debunking the Biggest Cocktails & Spirits Myths. A Visual Tour of 35 Literary Bars and Cafés from Around the World. After Building the World's Best Wine List, Pascaline Lepeltier Moves On. On the last day of August, 2017, Master Sommelier Pascaline Lepeltier posted a series of 10 photos on Instagram, featuring some of the world’s finest wine bottles. “8 years building a list,” read each caption, followed by the hashtag #bestwinelistintheworld. 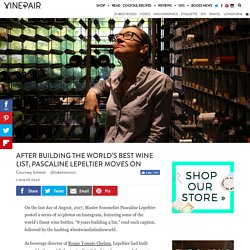 As beverage director of Rouge Tomate Chelsea, Lepeltier had built arguably the world’s best wine list. It had just been named the 2017 Best Long Wine List in the World by World of Fine Wine. The bottles showcased on Lepeltier’s feed were evidence of the program’s prestige, which she had spent eight years building. It was the crowning glory of a restaurant that opened its doors just one year prior. We Went to Chili's and Drank Every Margarita on the Menu. I’m sitting alone at the end of the upstairs bar of a Chili’s in New Jersey. 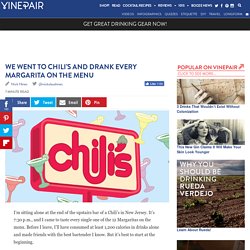 It’s 7:30 p.m., and I came to taste every single one of the 12 Margaritas on the menu. Follow this pub crawling guide for next night out. The Best Bars in Dallas. Coolmaterial. Whiskey. The nectar of the gods. Seldom a word in the English language exists that gets our blood pumping as much as that sweet, sweet word. Whiskey. And when you hang it on a door outside a brick building, or on the flier to a party invitation, or even on the entry gates outside Hell itself, we’re immediately drawn to it. Drinks that Hit Harder than Dad! New York and London Scored Almost All the World’s Best Bars. Declaring a “best” bar can be tricky. The things valued by a bunch of Miller Lite chugging Milwaukee Brewers fans (like a TV that’s showing the not-so-big game) is going to be a lot different than what a bunch of Cognac-sipping London bankers are after (like really private bathroom stalls). But every year, Drinks International enlists their 476 industry experts to cast votes and decide the question once and for all.

I was feeling apprehensive. Confession: I rarely drink coffee. I don’t often hang out in coffee shops. I’d rather be at a bar, where I can order alcohol, my addictive liquid of choice. But I was about to broaden my horizons. “Is this going to seriously wind me up?” “The bourbon will bring you down.” “So they cancel each other out?” “Not how that works,” my companion said, scanning the menu. Drugstore Cowboy is laid-back and well-lit, the kind of place where literary types, artists, and musicians might spend time. After an eternity of shaking, the bartender finally poured my drink. Stunning Photos Of Brettos, The Oldest Bar In Athens. Ships to Reopen on July 13, Take a Look Inside. Comment Beloved Dallas dive, Ships, closed last year after more than 60 years of business. We all shed a tear for the bar, said our goodbyes, and moved on. That was until a curious post sprung up from the shuttered dive’s Facebook page on June 30. “Believe in second chances,” was typed next to a photo of Ship’s front door.

Obviously this caused plenty of speculation. I received a phone call from Matt Pikar, owner of Nora and co-owner of Dallas Beer Kitchen, letting me know that Ships was, indeed, making a comeback with him and his business partner, Naser Nayeb, at the helm. “We kept as much as we could; 90 percent of the bar is original,” Pikar explains while showing me around the space. Quotes About Drinking (445 quotes) Esquire's Best Bars in America​ 2016 - Where to Drink in the U.S.A. Today, this kind of bar numbers in the thousands, and you can find them in just about every town in the country.

Discovering Santa Fe’s ‘Margarita Trail’ (with recipes) The Surprising Origins Of Happy Hour. We’ve all tremulously uttered (or heard) the phrase “is Happy Hour…over?” But before you put in that last-minute drink order, ever stop to wonder when Happy Hour actually began? The 21 Best Cocktail Bars in America. 'The Bar' At Hotel Bel-Air, Where Hollywood's Golden Age Never Ended. Hotel entrance circa 1951. Copyright, Hotel Bel-Air, via Andrew Harper Los Angeles has developed a reputation, one that’s rather unfair.

Traffic jams, celebrity DUI’s, and gluten-free eateries have become the unwarranted icons of the West coast metropolis. Employees Only - Welcome. Secret Bars - Hard to Find Speakeasies. Bartesian Is The Keurig Of Cocktails. Cocktails are a saving grace at the end of a long workday, but some people feel that having to shake up your own takes all the fun out of it. Famous Drunks in History. The great drunks of world history: Jeltsin, Picasso, Cleopatra, Churchill, Franklin, Peter the Great, Atatürk, Hemingway, Van Gogh, Botev and Aldrin (from left to right). It’s often thought or said that heavy drinkers contribute nothing to society. Well, we believe the opposite is true. Some of the greatest men and women in world history made it a daily mission to get absolutely smashed.

World's Best Airport Bars - In Between Flights, Listen to Live Music or Sit Poolside. Parliament. Best New Bars In America - Tiki Tolteca, NoMad Bar, Parliament. The world’s biggest drinkers are not who you think. Powdered alcohol is a thing, promises to make game day better. The Best New Bars in America - 2013 Drink Openings. Where the Drinking Man Drinks by Thrillist & Dewars. The Best Speakeasies in America - 14 Bars with Hidden Entrances. These are the 33 best dive bars in America.