Bolt Ton a Man of Peace

George Conway explains the ‘fateful misjudgment’ John Bolton made. Trump Names John Bolton National Security Adviser. The Fallen Heroes Who Went to Vietnam in John Bolton’s Place. Bolton: Trump Has Unique Ability To 'Size Kim Jong-un Up' So U.S. Is Skipping 'Months Of Preparation' John Bolton involved with shadowy data firm Cambridge Analytica — according to massive new leak. New details are emerging about how the shadowy data firm Cambridge Analytica worked to manipulate voters across the globe, from the 2016 election in the United States to the Brexit campaign in Britain and elections in over 60 other countries, including Malaysia, Kenya and Brazil. 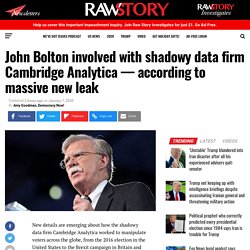 A new trove of internal Cambridge Analytica documents and emails are being posted on Twitter detailing the company’s operations, including its work with President Trump’s former national security adviser John Bolton. The documents come from Cambridge Analytica whistleblower Brittany Kaiser, who worked at the firm for three-and-a-half years before leaving in 2018. Transcript AMY GOODMAN: New details are emerging about how the shadowy data firm Cambridge Analytica worked to manipulate voters across the globe, from the 2016 election in the United States to the Brexit campaign in Britain to elections in over 60 countries, including Ukraine, Malaysia, Kenya and Brazil.

BRITTANY KAISER: Yeah. Enjoy this piece? Paranoid Trump suspects John Bolton is trying to destroy his presidency with media leaks. John Bolton Consoles Self That At Least He Didn’t Help To Make World Safer Place. John Bolton Urges War Against The Sun After Uncovering Evidence It Has Nuclear Capabilities. WASHINGTON—Amid escalating tensions with the hostile celestial object, National Security Adviser John Bolton argued for military action against the Sun Monday after being presented with evidence it has nuclear capabilities. 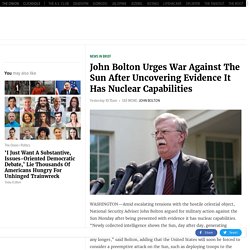 “Newly collected intelligence shows the Sun, day after day, generating extreme levels of nuclear energy, and America simply cannot stand idly by any longer,” said Bolton, adding that the United States will soon be forced to consider a preemptive attack on the Sun, such as deploying troops to the Sun’s surface or a targeted strike to swiftly take out the Sun. “We know the Sun is harboring dangerous amounts of nuclear power in what we are referring to as its ‘Core,’ a site where the Sun appears to be fusing over 600 million metric tons of hydrogen every second. This is, needless to say, an extremely powerful, aggressive star that threatens the American way of life, and, frankly, I question the utility of negotiating with such an unreasonable orb.” 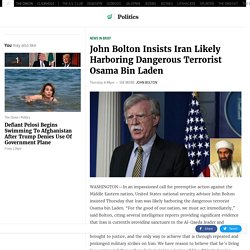 “For the good of our nation, we must act immediately,” said Bolton, citing several intelligence reports providing significant evidence that Iran is currently providing sanctuary to the Al-Qaeda leader and mastermind of the Sept. 11 attacks. “We must never rest until this fugitive is brought to justice, and the only way to achieve that is through repeated and prolonged military strikes on Iran.

We have reason to believe that he’s living in a compound there where he’s training a legion of bloodthirsty Iranian civilians to take up arms as the next generation of terrorists. It is our solemn duty as the international safeguard of freedom to prevent this at all costs.” Bolton Won't Listen to Khashoggi Tape Because It's in Arabic. Why John Bolton vs. Int’l Criminal Court 2.0 is Different from Version 1.0.

It is tempting to read or listen to John Bolton’s speech on the International Criminal Court (ICC) and think, we’ve seen this movie before and know its ending. 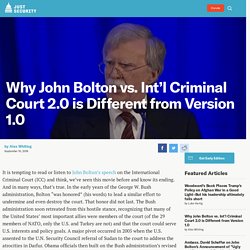 And in many ways, that’s true. In the early years of the George W. Bush administration, Bolton “was honored” (his words) to lead a similar effort to undermine and even destroy the court. That honor did not last. The Bush administration soon retreated from this hostile stance, recognizing that many of the United States’ most important allies were members of the court (of the 29 members of NATO, only the U.S. and Turkey are not) and that the court could serve U.S. interests and policy goals. So, in watching Bolton repeat many of the same tired and misleading arguments about the court from the early Bush administration, one might simply think, here we go again: a temporary return to the bad old days of hostility toward the ICC, followed by a foreseeable rapprochement. 1. 2. Splinternews. John Bolton wakes from terrifying nightmare of world at peace — Duffel Blog.