Grumman F8F-2P Bearcat G-RUMM - The Fighter Collection. Bearcat. Grumman F8F Bearcat Pilot Report. It has been several weeks since I pushed the throttle home on that big Pratt & Whitney R-2800, and I've flown a lot of airplanes since, but I can't get that Bearcat out of my mind. 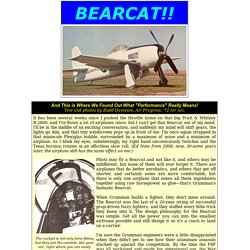 I'll be in the middle of an exciting conversation, and suddenly my mind will shift gears, the lights go dim, and that tiny windscreen pops up in front of me. I'm once again strapped in that miniscule Plexiglas bubble, surrounded by a maximum of noise and a minimum of airplane. As I blink my eyes, unbelievingly, my right hand unconsciously twitches and the Texas horizon rotates in an effortless slow roll. (Ed Note from 2008: now, 30-some years later, the airplane still has the same effect on me.) Pilots may fly a Bearcat and not like it, and others may be indifferent, but none of them will ever forget it. F8f 1 Bearcat. ManufacturerGrummanModelF8F-1 BearcatName“204”Tail NumberN58204 If the Bearcats had ever screamed into battle with Japanese Zeros in the closing chapters of WWII, the reaction on the enemy side might have been, “What the heck was that?” 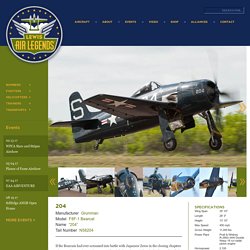 The notoriously maneuverable Japanese fighters had dominated too many dogfights, and the F8F was designed as the last piston-engine aircraft used in the war to answer the need for an aircraft with a dramatically increased rate of climb and high top speed. Fortunately for the Zero pilots, who already had their hands full with the F4U Corsairs, the Bearcat units arrived too late in the Pacific to see combat. One of four F8 fighters in the Lewis Air Legends Bearcat squadron – another is the famous Rare Bear – 204 was rebuilt to Zero Time standards by Bruce Lockwood at the Museum of Flying from 1993 to 1995. With all new or completely overhauled systems, this remarkably fast, capable fighter is ready and waiting to report for duty. 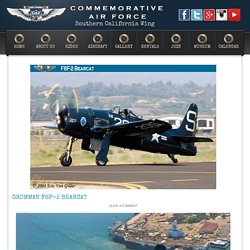 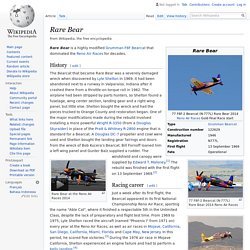 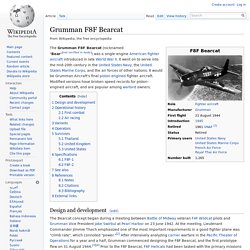 It went on to serve into the mid-20th century in the United States Navy, the United States Marine Corps, and the air forces of other nations. It would be Grumman Aircraft's final piston engined fighter aircraft. Modified versions have broken speed records for piston-engined aircraft, and are popular among warbird owners. Design and development[edit] The Bearcat concept began during a meeting between Battle of Midway veteran F4F Wildcat pilots and Grumman Vice President Jake Swirbul at Pearl Harbor on 23 June 1942. Grumman F8F Bearcat Flight Demonstration - MONSTER Pratt & Whitney Radial Engine Sound ! Grumman F8F Bearcat. Virtual Tour & Cockpits - National Naval Aviation Museum. Virtual Tour & Cockpits Featuring over 100 panoramas, our interactive Virtual Tour allows you to explore the National Naval Aviation Museum from your computer or mobile device, giving you an immersive look at the aircraft and exhibits displayed in honor of the achievements and sacrifices made over a century of Naval Aviation. 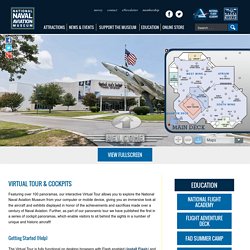 Further, as part of our panoramic tour we have published the first in a series of cockpit panoramas, which enable visitors to sit behind the sights in a number of unique and historic aircraft! Getting Started (Help) The Virtual Tour is fully functional on desktop browsers with Flash enabled (install Flash) and iPad devices. Panoramas can also be browsed on iPhones or Android devices with Adobe Flash, though some features may not be available. Looking Around As you browse a panorama, be sure to take in the full 360 x 180 degree field of view; there are often interesting sights and exhibits above and behind, and sometimes below you! Interact Navigation Share Main Deck. Bearcat.pdf. Stefan Karwowski and the Grumman F8F Bearcat. Grumman F8F Bearcat Visits Livermore, CA.