An Addition or Renovation here & there 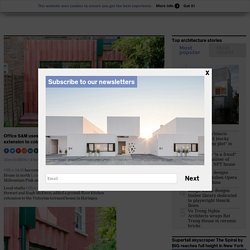 Local studio Office S&M, which is headed by architects Catrina Stewart and Hugh McEwen, added a ground-floor kitchen extension to the Victorian terraced house in Haringey. As one of the clients works as a colour consultant the well-lit space was designed to double up as an area to meet with clients. This replaced her south-facing studio at the front of the house that had variable sunlight conditions that made it hard to maintain colour consistency while working or holding meetings. Part of the brief for the Overcast House, therefore, became about creating a space with even light that could be used as both a kitchen for entertaining and an artist's studio. "Creating a well-lit space that is shielded from direct sunlight was an unusual challenge," Office S&M pointed out. 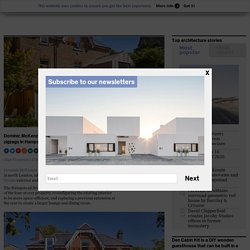 The Hampstead House project involved a complete renovation of the four-storey property, reconfiguring the existing interior to be more space-efficient, and replacing a previous extension at the rear to create a larger lounge and dining room. Architect Dominic McKenzie and his team sought to restore the Victorian character of the main house in their design. At the same time, they wanted to create a modern extension with its own personality. "With Hampstead House we wanted to try to create something more imaginative than you sometimes see with London house extensions," McKenzie told Dezeen. "We wanted to get away from the standard box-like extrusion to create more volumetrically interesting space, with an individual material character that brings a sense of quality. 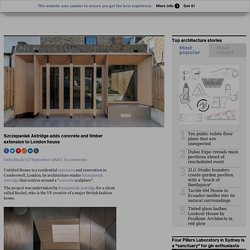 The project was undertaken by Szczepaniak Astridge for a client called Rachel, who is the VP creative of a major British fashion house. Rachel asked Szczepaniak Astridge to create a home where she could relax and decompress after work. "Untitled House has no name. Like a piece of art with no name," said the studio. "We wanted to introduce a concrete-walled void through from the kitchen up to the bathroom. Concrete poured in situ forms the foundations, floors, walls and ceilings of the ground-storey kitchen and a new bathroom on the first floor. Welsh + Major uses patterned window screens for extension in Sydney.

Studio Bright extends Ruckers Hill House to make room for rest and play. The two-floor extension that Studio Bright has added to this Edwardian family home in Melbourne includes fun features like a theatre-style sitting room and a pool that resembles a Roman bath. 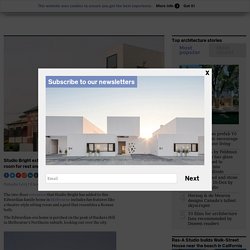 The Edwardian-era home is perched on the peak of Ruckers Hill in Melbourne's Northcote suburb, looking out over the city. Inside it had a conventional layout that comfortably accommodated the family's bedrooms but, despite various lean-tos that had been added to the house over the years, there was a lack of proper living space. The inhabitants were keen to have more multifunctional rooms where they could indulge in their personal hobbies. Atelier Vens Vanbelle tops cinematic guesthouse with watchtower.

Architecture studio Atelier Vens Vanbelle has built a Corten steel guesthouse with a watchtower in Uitbergen, Belgium, for a client in the film business. 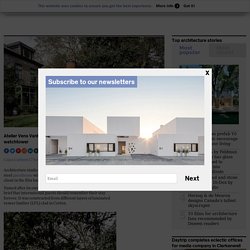 Named after its owner, Alex Guesthouse was built to meet his brief that international guests should remember their stay forever. It was constructed from different layers of laminated veneer lumber (LVL) clad in Corten. "We had to think of something beyond other guesthouses," Atelier Vens Vanbelle founders Dries Vens and Maarten Vanbelle told Dezeen. "It should be something you've never seen or experienced before, and guests should feel at ease during their stay. We came up with the idea of a sort of wooden cave, because wood can give you this 'cosiness'. " Oliver Leech Architects adds new kitchen in Vestry Road house extension. Oliver Leech Architects has extended a house in south London, adding a kitchen that pairs natural wood and brick with a muted colour palette. 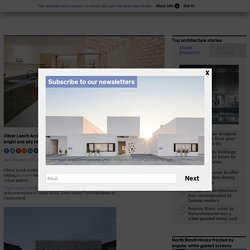 The London-based studio aimed to create a calming atmosphere in its renovation of Vestry Road, a two-storey Victorian house in Camberwell. The project involved a complete remodelling of the building, to create a more open-plan layout for the ground floor. Some of the original walls were knocked through, while the original kitchen was replaced with another twice as big. This new room functions as both a kitchen and dining room, freeing up space elsewhere for a new study. Yoshichika Takagi adds translucent facade to gabled house in Hokkaido. A house with an asymmetrical roof on the Japanese island of Hokkaido has been renovated and extended by architecture studio Yoshichika Takagi + Associates. 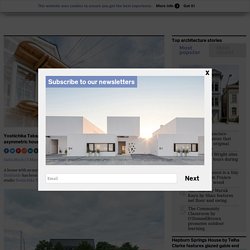 Yoshichika Takagi + Associates has carried out a dramatic renovation of a house on the outskirts of the city of Furano, which was originally built in 1974. The studio stripped the two-storey house back to its wooden frame. Its clapboard facade was removed and replaced by black sheet metal on three sides, while panels of translucent corrugated plastic cover the extension on the fourth side.

Yoshichika Takagi + Associates named the project Deformed Roofs of Furano for its unusual profile. The project is based on a study carried out by the studio of asymmetrical buildings in the area that were popular in the 1960s and 70s. "Houses such as these, which are called 'deformed roof' houses, can be seen often in Hokkaido, but is difficult to call them beautiful, and cannot be seen out of Hokkaido," said the studio. 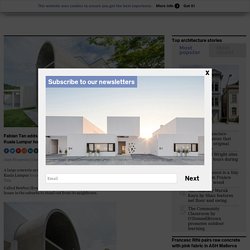 Called Bewboc House, the project allows a typical terraced house in the suburbs to stand out from its neighbours. The barrel-vaulted concrete extension projects out diagonally from the south corner of the otherwise L-shaped property. Facing the street corner, its simple geometric shape creates a weighty presence, which makes it look like a separate structure. "The approach was to imagine a form befitting a corner house," explained Tan. "The new form is intended to be simple but bold, contrasting with the existing fabric of tropical suburban homes. " Five San Francisco house extensions that contrast the original architecture. These five houses in San Francisco are traditional in the front and have contemporary extensions in the back. 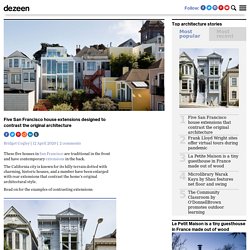 The California city is known for its hilly terrain dotted with charming, historic houses, and a number have been enlarged with rear extensions that contrast the home's original architectural style. Read on for the examples of contrasting extensions: Alamo Square Residence by Jensen Architects This Victorian house was renovated and extended by local studio Jensen Architects. The addition features perforated aluminium panels and contemporary interiors to match. The street-facing facade, dating back to 1889, was restored as well, and Jensen Architects was awarded the San Francisco Historic Preservation Commendation Award for the project by the American Institute of Architects. Reuse in Action: A London Townhouse Remodel By Architectural Salvage Masters Retrouvius. “Reuse is not a design trend; it’s an attitude, a mindset, and a behavioral approach that isn’t just relevant today— it’s vital,” says Maria Speake. 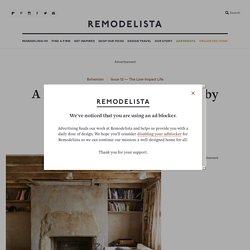 Back in the early 1990s in Glasgow, she and fellow architecture student Adam Hills watched historic buildings being demolished. “The madness of this process wasn’t just about unnecessary waste, it disregarded the common sense that used to underpin construction: valuing materials and craft.” In response, the couple founded Retrouvius, their now 26-year-old London-based salvage company, that all this time has been leading by example.

“In the simplest terms, we rescue materials, furniture, lighting and fixtures, and continue their life,” they write. “Increasingly, we understand our mission as something more fundamental: to enable and inspire reuse, not just as a design preference but as a way of life.” Photography by Tom Fallon courtesy of Retrouvius. “It was originally from Somerset,” says Maria of the mantel. 'ti clara' farmhouse sees a minimalist revitalization by espaço P2 architects. Espaço P2 architects introduces the ‘ti clara’ house in ansião, portugal — a renovation, photographed by josé campos, which transcends the physical limits of the traditional heritage building. together with the practical architectural elements of the project, the portuguese studio works to harness the historic nature of the surrounding area to generate the quiet, familiar atmosphere of the space. the design team comments on the project: ‘the history of its inhabitants were considered. memories, dreams and desires are represented in objects that have been kept for generations. these have been incorporated into the new space.’ all images by josé campos | @josecamposphotographer axonometric diagram pre-existing floor plan renovated floor plan project info:

Wood Box by MOA Architecture. When young couple Leïla and Xavier decided to buy a house in Montreal, they envisioned a multigenerational home that could house Leïla’s mother as well as their own planned family. Archer + Braun adds glass and stone extension to grand Edinburgh villa. Architecture studio Archer + Braun has renovated a Victorian villa in Edinburgh, adding a glazed extension with red sandstone cladding. Called Edinburgh Pavilion, the minimal extension was designed as a deliberate contrast to the existing Grade B-listed structure. The main house is laid out as a series of formal, large and well-decorated rooms. Archer + Braun's volume is a glazed rectangular volume with no dividing walls. Green ceramic tiles cover extension of a house in rural China. Wonder Architects have used pale green ceramic tiles to clad a house extension in Yangqing, China, that mirrors the form of its traditional neighbours. Called Intertwine House, the building closely resembles the dimensions and pitched roofs of the village's existing houses, so old and modern architecture sit side by side.

Brick columns support Twist House extension by Urban Mesh in London. Four sculptural, brick columns frame this small extension to a Georgian terrace in north London, designed by local practice Urban Mesh for the firm's director, James Beazer. Named Twist House, the extension to the 200 year-old home was designed to improve its connection to a garden at the rear and contains utility and shower spaces at basement level and living space at ground-floor level.

Drawing on the expressionist forms of German architect Fritz Höger and reminiscent of Antoni Gaudi's art nouveau constructions, the project sought to merge the traditional materiality of London's terraces with a more experimental approach. "Bricks are so often used as veneer, we wanted to use this small intervention to give the common brick a chance to aspire to be something closer to its original nature," said Beazer.