How to Tip in Las Vegas - A Sin City Guide to Gratuity. There’s always something to get up to in Las Vegas, from a night at one of Sin City’s extravagant clubs to an extravagant meal at one of its best restaurants, but you’re not getting in the door at the former, or a table at the later, if you’re not ready to take care of the people who really run this town -- the servers, valets, doormen, etc. 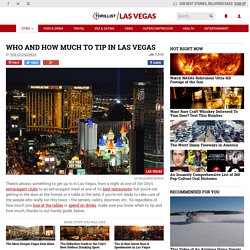 So regardless of how much you lose at the tables or spend on drinks, make sure you know when to tip and how much, thanks to our handy guide, below. Las Vegas News Bureau The valet Visitors from big cities like New York and Chicago no doubt appreciate all the free and available parking on the Strip. However, most of the parking garages are built behind the casinos and require a bit of a walk to get wherever you are going. Continue Reading Crave At dinner Don't skimp on the tip even if your bill was padded with big ticket bottles of wine.

Cabo Wabo Your server The bartender Crazy Horse III/Jenna Dosch. The 40 Essential Things To Do In Las Vegas Before You Die - Vegas Bucket List. Life is short. 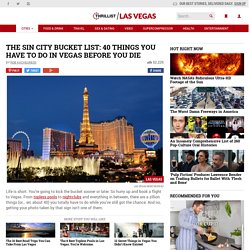 You’re going to kick the bucket sooner or later. So hurry up and book a flight to Vegas. From topless pools to nightclubs and everything in between, there are a zillion things (or... err, about 40) you totally have to do while you’ve still got the chance. And no, getting your photo taken by that sign isn’t one of them. Anthony Mair 2. HEXX is the only place in Vegas, and one of the few in country, to make its own ultra-premium chocolate from scratch, with beans sourced from places like Tanzania and Madagascar. 3.

The Westgate is your one-stop shop for all things Elvis. Ghostbar 4. The Ghostbar lounge is one of the best places to soak in the view of the Las Vegas Strip. Richard Petty Driving Experience 5. The Richard Petty Driving Experience gives you the chance to hop behind the wheel of an IndyCar, American muscle car, or some other crazy ride and put the foot fully to the floor without worrying about getting pulled over by a friendly member of Metro Police. 6. Al Powers 7. From L’Atelier de Joel Robuchon to Andrea’s these are Vegas’ Best Restaurants. It’s ironic that nowadays the best thing about Sin City, other than its topless pools (obviously), are its restaurants, but no city in America has so many great chefs working in so small a place, or so many great restaurants. 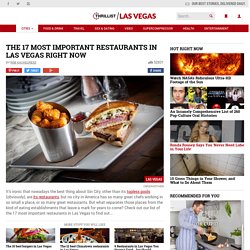 But what separates those places from the kind of eating establishments that leave a mark for years to come? Check out our list of the 17 most important restaurants in Las Vegas to find out... Bill Milne Andiron Steak & Sea Downtown Summerlin Andiron has only been open a few months but it’s tough to find a better steakhouse west of the Strip. Continue Reading L’Atelier de Joel Robuchon L'Atelier de Joël Robuchon MGM Grand The namesake Joël Robuchon restaurant next door may be the “nicer” and more upscale (and yes, more expensive) choice of the two, but L’Atelier is the one that took the more impressive risk. 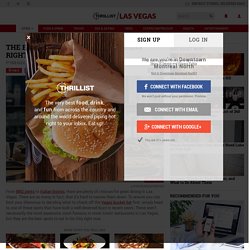 There are so many, in fact, that it’s hard to narrow them down. To ensure you can limit your dilemmas to deciding what to check off the Vegas bucket list first, simply head to one of these spots that have built a well-deserved buzz in recent years. These aren’t necessarily the most expensive, most famous, or most iconic restaurants in Las Vegas, but they are the best spots to eat in Sin City right now.

Bill Milne Save Venue With No Dish Neighborhood/Location Downtown Summerlin Description The team behind locals’ favorites like Honey Salt and Made L.V. has created the top culinary destination in Downtown Summerlin with their most ambitious project to date. Continue Reading Flickr/kennejima Aria Michael Mina's latest of four distinct and very different Las Vegas restaurants is more than just French cuisine for big American crowds. Bazaar Meat.