LittleBits: DIY Electronics For Prototyping and Learning. The Creative Science Centre - by Dr Jonathan P. Hare. Apart from the piezo generator all the following are based on the same simple design: magnets are rotated (or translated) near to coils of wire (Faraday Induction). 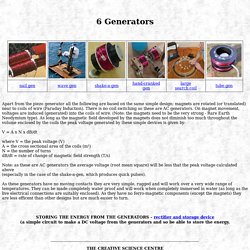 There is no coil switching so these are AC generators. On magnet movement, voltages are induced (generated) into the coils of wire. (Note: the magnets need to be the very strong - Rare Earth Neodymium type). As long as the magnetic field developed by the magnets does not diminish too much throughout the volume enclosed by the coils the peak voltage generated by these simple devices is given by: V = A x N x dB/dt. 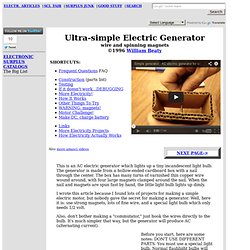 Even uncharged wires are full of charge! After all, the atoms of the metal are made half of positive protons and half of negative electrons. Metals are special because their electrons don't stay connected to the metal atoms, instead they fly around inside the metal and form a type of electric "liquid" inside the wires. All wires are full of electric fluid. Modern scientists call this the "electron sea" or "electron gas. " When a circle of wire surrounds a magnetic field, and the magnetic field then changes, a circular "pressure" called Voltage appears. Generators don't have just one circle of wire. Why is this generator AC and not DC?

If you want a DC generator, you'll have to add a special reversing switch to the magnet shaft. Now for the light bulb. Microcontroller Kit. Instructions - Printrbot. Printrbot Go! - Printrbot. Maker creates a Steampunk-inspired 3D printer. A 3D printer suited for the Wild West.

First coined by author K. W. Jeter, steampunk refers to a sub-genre of science fiction and fantasy literature that commonly features some aspect of steam-powered machinery, especially in a setting inspired by industrialized Western civilization during the 19th century. In other words, think “Wild, Wild West.” Over the years, there has undoubtedly been a rise in the theme’s popularity, as seen across Maker Faires and in a number of slick DIY projects like this wristwatch. MegaAVR powers this Steampunk VFD wristwatch. Maker John De Cristofaro recently devised a Steampunk-inspired wristwatch powered by an ATMega88 microcontroller (MCU). 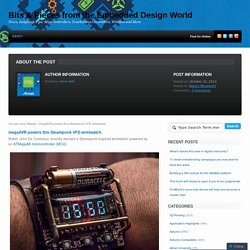 Dubbed the ChronodeVFD, the wearable device is built around a IVL2-7/5 VFD display tube. “I originally purchased a few of these tubes to build a standard desk clock, but after playing around with them, I realized I could probably build a wristwatch too,” the Maker writes. De Cristofaro notes some of the features which made the tube well-suited for this purpose, including its size (only 1.25″ x 2.25″), its flatness making for a sleeker watch design, its low-grid voltage (12-13V), as well as its nominal 60mA filament current at 2.4V.

“One other feature that I like about this device is that unlike nearly every other VFD tube, the IVL2-7/5 has no opaque or diffuse backing behind the digits. It’s completely transparent front to back, which means that if you put it on top of a circuit board, you can (with a bit of backlighting) see the PCB below.” Like this: Like Loading... These Autonomous Drones Follows You and Films You. CUBOT GT99 4.5 Inch 4G ROM Android 4.2 MTK6589 Quad Core Smart Phone - US$139.99. ===Official Help Center=== How To Check If This Phone Can Be Used In Your Country - Banggood Forum. Dear customers, Because there are a lot of questions regarding whether a smartphone will work in your country and their network coverage, we have written a short guide to help you find out. 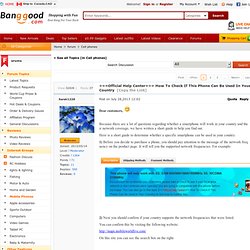 Here is a short guide to determine whether a specific smartphone can be used in your country. 1) Before you decide to purchase a phone, you should pay attention to the message of the network frequency on the product page. It will tell you the supported network frequencies. For example: 2) Next you should confirm if your country supports the network frequencies that were listed. ARDUINO SOLAR CHARGE CONTROLLER (PWM) [ Play Video ] In my previous instructables I described the details of energy monitoring of a off grid solar system.I have also won the 123D circuits competition for that.You can see this ARDUINO ENERGY METER. 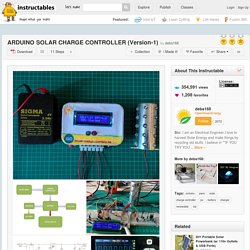 Finally I post my new version-3 charge controller.The new version is more efficient and works with MPPT algorithm. You can see it by clicking the following link. ARDUINO MPPT SOLAR CHARGE CONTROLLER (version-3.0) You can see my version-1 charge controller by clicking the following link. ARDUINO SOLAR CHARGE CONTROLLER ( Version 2.0) In solar power system, charge controller is the heart of the system which was designed to protect the rechargeable battery .In this instructables I will explain the PWM charge controller. Solar power have the advantage of being less maintenance and pollution free but their main drawbacks is high fabrication cost, low energy conversion efficiency. How to Wire Speakers Together. Download Archive - Symbol For Electronics.