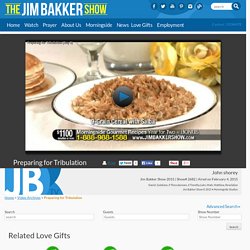 Quotes We have to study [the Bible]! You’ve got to get involved with a study group, a prayer group. You’ve got to go to a church where you’re studying the Word of God. -Pastor Jim Bakker How will we know if we don’t hear the Word? I believe by the end of this year we’re going to have a lot of hell breaking loose on earth… -Pastor Jim Bakker What good is the Bible if you don’t understand it? God warned me when I got out of prison that I was to warn the people. Scriptures. Is ISIS in Psalm 83? - Prophecy Depot Ministries. On Friday, December 26, 2014 by Bill Salus A 3000 year old prophecy written in the book of Psalms appears to be alarmingly close to finding its final fulfillment. 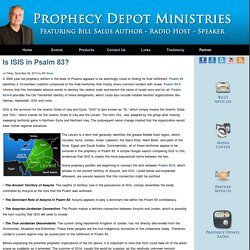 Psalm 83 identifies a 10-member coalition comprised of the Arab territories that mostly share common borders with Israel. Psalm 83:4 informs that this formidable alliance wants to destroy the Jewish state and banish the name of Israel once and for all. Psalm 83:6-8 provides the Old Testament identity of these belligerents, which could also include notable terrorist organizations like Hamas, Hezbollah, ISIS and more. ISIS is the acronym for the Islamic State of Iraq and Syria.

The Levant is a term that generally identifies the greater Middle East region, which includes Syria, Jordan, Israel, Lebanon, the Gaza Strip, West Bank, and parts of the Sinai, Egypt and Saudi Arabia. 16 of the Best Ways to Work Smarter, Not Harder - The Zapier Blog. When I really focus on what I'm doing and work hard, I'm usually surprised at how much I can get done. 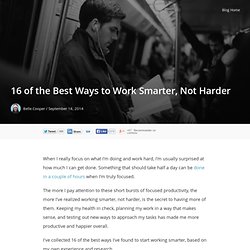 Something that should take half a day can be done in a couple of hours when I'm truly focused. The more I pay attention to these short bursts of focused productivity, the more I've realized working smarter, not harder, is the secret to having more of them. Keeping my health in check, planning my work in a way that makes sense, and testing out new ways to approach my tasks has made me more productive and happier overall. Reasons Why Not To Use Free URL Shorteners - What Are The Alternatives. As the name implies, URL shorteners allow you to easily shorten a long, unsightly URL into a smaller more manageable link. 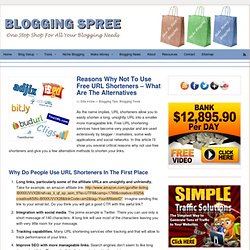 Free URL shortening services have become very popular and are used extensively by blogger / marketers, some web applications and social networks. In this article I’ll show you several critical reasons why not use free shorteners and give you a few alternative methods to shorten your links. Why Do People Use URL Shorteners In The First Place Long links, particularly some of the affiliate URLs are unsightly and unfriendly. Take for example, an amazon affiliate link: Imagine sending this link to your email list. Critical Reasons Why You Should Not Use Free URL Shorteners You do not own the link.

Alternatives To Free URL Shortening Services There are several alternatives you can use to create your own shorteners. Ready made scripts ► Link Supercharger. This is not a plugin and can be used for non-wordpress sites as well. ►Pretty Link. ►Easy Redirect Script. Prepared Christian Being Prudent In Today's World. Otherwise Engaged - The Omega Letter. Otherwise Engaged Israel - Middle East Wednesday, March 02, 2011 Wendy Wippel Heard any good eschatology lately? 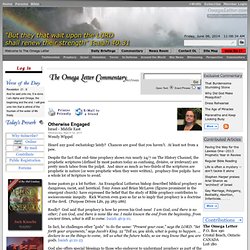 Chances are good that you haven’t. At least not from a pew. Despite the fact that end-time prophecy shows run nearly 24/7 on The History Channel, the prophetic scriptures (defined by most pastors today as confusing, divisive, or irrelevant) are pretty much taboo from the pulpit. And since as much as two-thirds of the scriptures are prophetic in nature (or were prophetic when they were written), prophecy-free pulpits have a whole lot of Scripture to avoid. Some pastors go a lot further. Really? In fact, he challenges other "gods" to do the same: “Present your case,” says the LORD. God also offers special blessings to those who endeavor to understand prophecy as part of the "whole counsel of God". John was called the one loved by the Lord; Gabriel told Daniel to his face that he was "highly esteemed" by God.

Intoxicated On Life - Pursuing a Healthy Home Life. End-of-Days Scenarios – Part 11 « Terry James Prophecy Line. Israel, in our ongoing end-of-days scenario, has agreed to all stipulations the western international community –under inspiration of a great world leader—has required of the Jewish state. 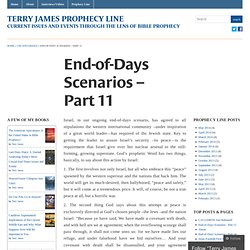 Key to getting the leader to assure Israel’s security –its peace—is the requirement that Israel give over her nuclear arsenal to the still-forming, growing superstate. God’s prophetic Word has two things, basically, to say about this action by Israel: 1. The first involves not only Israel, but all who embrace this “peace” spawned by the western superstar and the nations that back him.