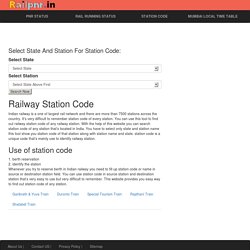 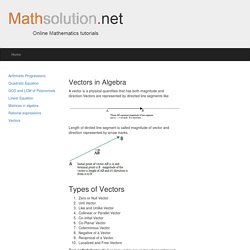 Zero or Null Vector Unit Vector Like and Unlike Vector Collinear or Parallel Vector Co-initial Vector Co-Planar Vector Coterminous Vector Negative of a Vector Reciprocal of a Vector Localized and Free Vectors Zero or Null Vector :Null or zero vector are vector whose initial and terminal points are coincident means starting or end points are same.zero or bull vectors is denoted by 0(zero) like 0→Unit Vector :if modulus of any vectors is unity then that vectors is called unit vectors. unit vectors is denoted by |a|→=1 Collinear or Parallel Vector :Vectors having same or parallel supports are known as Collinear or Parallel Vector. Rational expressions and solution with example-mathematics tutorials-algebra on mathsolution.net. Rational expressions is defined as the quotient p(x)/q(x) of two polynomials p(x) and q(x) where q(x) is non zero polynomial. for example if p(x)=x2-2x and q(x)=2x-4 (non zero polynomial) are two polynomials then quotient p(x)/q(x)=x2-2x/2x-4 is known as rational expression of polynomials.where p(x) is known as numerator and q(x) is known as denominator of rational expression. 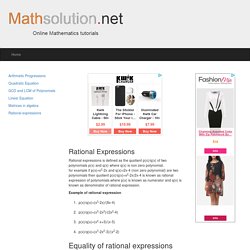 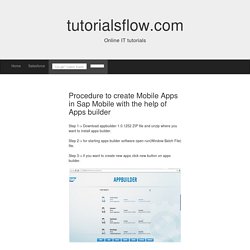 Step 2-> for starting apps builder software open run(Window Batch File) file. Step 3-> if you want to create new apps click new button on apps builder. Step 4-> Enter project name Device type(phone,Tablet) and template(Generic Application , Tab Based Application) type and click confirm button. After clicking confirm button you will get a blank template Step 5-> click on Tool tab that's use to create new apps. Create workflow in salesforce. For opening Flow creation window Go to the setup-->Expend Create --> workflow & Approvals -->click Flow link All flow will listed there for creating new flow Click newFlow button New Flow Window will be appears you can find all tool or element on the left side of flow creation page. drag and drop screen tool on right side page that comes under user interface tab . 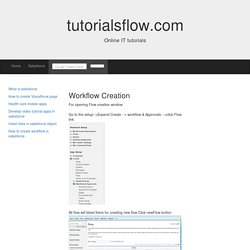 A new popup window will be appears. Add Screen field from Add a field tab. Loops For,While,Do while in C++ Loop are iteration statement that execute set of instruction until specified or termination condition is not fulfilled . execute same statements multiple times for exit from a loop without completion we can use the break statement that jump out side the block/loop and stop executing block of code. 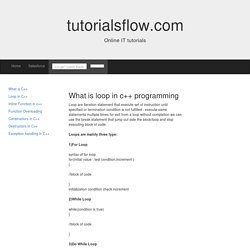 Loops are mainly three type: Destructors in c++ Destructors is a special member function that mainly used to destroy the object of its class. name of Destructors are same as class name only special character ~ added at the beginning of destructors. destructors never accept any argument like constructor. destructors also not return any value. compiler call destructors for destroying object upon exit from the program or block or function for cleanup memory . 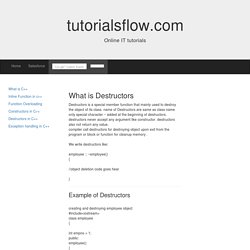 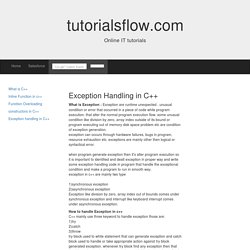 Exception in c++ are mainly two type throw exception; //block of statement which detect and throw an exception. What is C++ programming and it's Features. C++ is a computer programming language that based on object oriented concepts like encapsulation,overloading,polymorphism etc. it was developed by Bjarne stroustrup at AT&T Bell Loboratories in early 1980's. because of it's object oriented feature programmer can build large programs with clarity , extensibility and easy to maintenance feature . 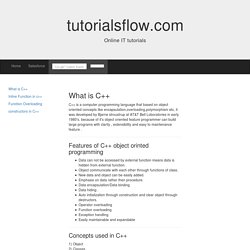 Features of C++ object orinted programming Data can not be accessed by external function means data is hidden from external function. Object communicate with each other through functions of class. New data and object can be easily added. GCD(HCF) and LCM of polynomials with example-mathematics tutorials-mathsolution.net. Polynomials. 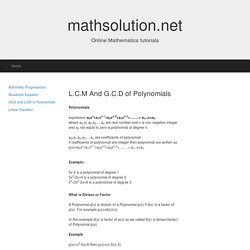 Linear equation is a equation that represent the straight line in the form of x axis and y axis. in a graphical representation that passes through x and y coordinate according to x and y values. if equation are degree two then that called Quadratic equation not linear There are mainly two type of linear equation 1) One Variable Linear equation 2) Two variables linear equation One Variable Linear equation ax=b where a and b are real number x=b/a where a not zero. Salesforce, visualforce, apex,salesforce1 mobile tutorials on tutorialsflow.com. Salesforce.com is a cloud computing and software-as-a-service (SaaS).It was founded in March 1999 by Marc Benioff. it is also known for its Salesforce customer relationship management (CRM) product.with the help of Salesforce platform-as-a-service (PaaS) product software developers can create Salesforce.com add-on applications. salesforce.com also provides AppExchange, a custom application building and sharing platform.

Salesforce1 is a new mobile interface it is used to access Salesforce on mobile devices it access all Standard and Custom objects, and through salesforce1 we can publish a visualforce Page to mobile devices. How to publish visualforce page for mobile devices What is the cloud computing What is AppExchange. How to create Visualforce page in salesforce tutorialsflow.com. Visualforce is the component-based user interface framework for the Force.com platform. The framework includes a tag-based markup language, similar to HTML. visualforce provides richset of component and also provide way for developers to create their own components. Visualforce uses model-view-controller (MVC) paradigm. and also use auto-generated controllers for database objects, providing simple and tight integration with the database.

Developer can write there own controllers, or extensions to controllers, using Apex Code. Develop Healthcare apps tutorialsflow.com. Save data in custom object in salesforce tutorialsflow.com. Create visualforce page by clicking on Build->Develop->Visualforce page click on new button for creating new form enter Label and Name of visualforce page and write code for creating form and click on save button for saving created page. On submit click we Pass data to controller and controller execute query like insert , update and after insert or update redirect to visualforce page . Function overloading in c++ Function Overloading is a technique to use same function name for different purposes. means we can write same function name to perform different tasks . we also called this technique as a function polymorphism in object oriented programming. one function name but different arguments using function overloading technique we can write group of function of same name but argument of each overloaded function will be different. whenever we call overloaded function that will be called depending on argument.

Access video from amazon s3 in salforce. Procedure to upload and access video from amazon server For accessing video from amazon server you need to create permission Log into your Amazon s3 consol Enter email id or password and click sign in using our secure server button for login click on S3 link from storage & content Delivery. Create AWS Java project in eclipse. For working on Amazon web services project first you need to install AWS java sdk in eclipse ide from Help->install new software-> and enter in work with and select AWS Deployment Tools and click next button . and follow bellow steps for creating new aws java project. Video tutorial mobile apps in salesforce. Constructors in c++ Constructors in c++ is a special member function that's mainly use to initialize the object of class. name of constructor will be same as class name and invoked whenever object of class is created. whenever object of any class will create that's class constructors will invoked and initialize the member variable of associated object.