Complexity & Management Centre. Previous blogs have outlined key features of the theory of complex responsive processes of relating between members of organisations as a way of making more sense of what we actually do in our everyday lives in those organisations. 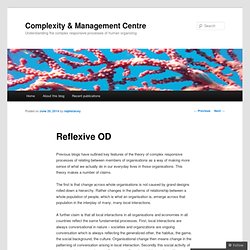 This theory makes a number of claims. The first is that change across whole organisations is not caused by grand designs rolled down a hierarchy. Predictability and Organisations. Yesterday, I was struck by an article in the Business Section of the Sunday Times with this heading: Directors told to predict future under new code. 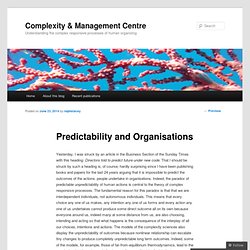 That I should be struck by such a heading is, of course, hardly surprising since I have been publishing books and papers for the last 24 years arguing that it is impossible to predict the outcomes of the actions people undertake in organisations. Indeed, the paradox of predictable unpredictability of human actions is central to the theory of complex responsive processes. The fundamental reason for this paradox is that that we are interdependent individuals, not autonomous individuals. Reflective practice. Reflective practice is the capacity to reflect on action so as to engage in a process of continuous learning.[1] According to one definition it involves "paying critical attention to the practical values and theories which inform everyday actions, by examining practice reflectively and reflexively. 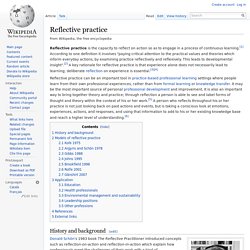 This leads to developmental insight".[2] A key rationale for reflective practice is that experience alone does not necessarily lead to learning; deliberate reflection on experience is essential.[3][4] Reflective practice can be an important tool in practice-based professional learning settings where people learn from their own professional experiences, rather than from formal learning or knowledge transfer. It may be the most important source of personal professional development and improvement. History and background[edit] Professor Emeritus Donald Schön. 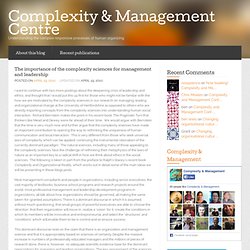 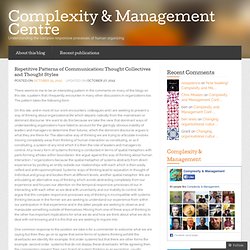 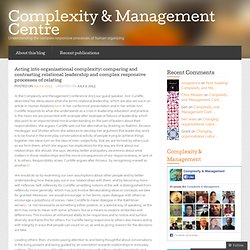 Conforming and resisting. Thinking with and within institutions. In her book How Institutions Think (1986) the social anthropologist Mary Douglas, who died in 2007, struggles with the paradox of the individual and the social. 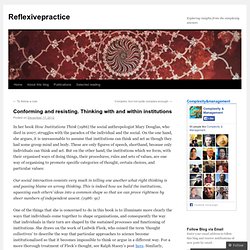 On the one hand, she argues, it is unreasonable to assume that institutions can think and act as though they had some group mind and body. These are only figures of speech, shorthand, because only individuals can think and act. But on the other hand, the institutions which we form, with their organised ways of doing things, their procedures, rules and sets of values, are one way of organising to promote specific categories of thought, certain choices, and particular values: Our social interaction consists very much in telling one another what right thinking is and passing blame on wrong thinking.

This is indeed how we build the institutions, squeezing each others’ ideas into a common shape so that we can prove rightness by sheer numbers of independent assent. (1986: 91) Ralph D. Stacey; Strategic Management and Organisational Dynamics « Tværfaglighed i Entrepreneurship. Chapter 14 – “Strategy as the emergence of organisational identity” seeks to exploit a theory by Elias who emphasizes how individual personality structures and society emerge simultaneously and thereby evolves over time. 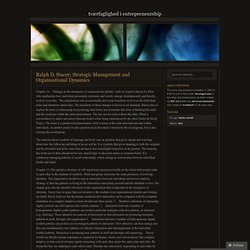 The organisation seen as personality and social structures evolves as the individual plans and intentions intertwines. Review of Seeing Like a State. J. Bradford DeLong delong@econ.berkeley.edu James Scott (1998), Seeing Like a State: How Certain Schemes to Improve the Human Condition Have Failed (New Haven: Yale University Press: 0300070160). I. Introduction There is a lot that is excellent in James Scott's Seeing Like a State .

On one level, it is an extraordinary well-written and well-argued tour through the various forms of damage that have been done in the twentieth century by centrally-planned social-engineering projects--by what James Scott calls "high modernism" and the attempt to use high modernist principles and practices to build utopia. This book marks the final stage because it shows the spread of what every economist would see as "Austrian ideas" into political science, sociology, and anthropology as well. No one can finish reading Scott without believing--as Austrians have argued for three-quarters of a century--that centrally-planned social-engineering is not an appropriate mechanism for building a better society. II.

III. Appreciative Inquiry as a variety of religious experience « Reflexivepractice. In an article in the journal AI (Appreciative Inquiry) Practitioner in 2012, the author and AI practitioner Gervase Bushe quotes from some of his personal correspondence with one of the founders of AI, David Cooperrider. 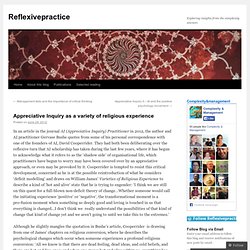 They had both been deliberating over the reflexive turn that AI scholarship has taken during the last few years, where it has begun to acknowledge what it refers to as the ‘shadow side’ of organisational life, which practitioners have begun to worry may have been covered over by an appreciative approach, or even may be provoked by it. He becomes conscious that this higher part is coterminous and continuous with a MORE of the same quality, which is operative in the universe outside of him, and which he can keep in touch with, and in a fashion get on board of and save himself when all his lower being has gone to pieces in the wreck. What is AI? Starting with the principles, AI claims to be a positive, strength-based approach to change.