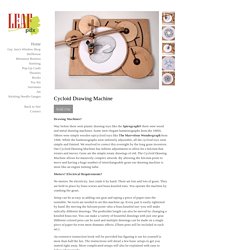 Way before there were plastic drawing toys like the Spirograph® there were wood and metal drawing machines. DIY Arduino controlled Egg-Bot - All. Improved printable eggbot by nglasson. Eggbot in action: Make your own and have fun designing and plotting your own designs onto eggs, balls or light bulbs. 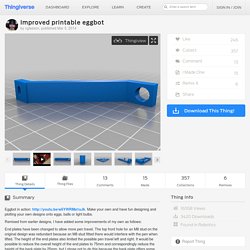 Remixed from earlier designs, I have added some improvements of my own as follows: End plates have been changed to allow more pen travel. The TRS Drawbot: A Drawing Robot. Once you get the hang of using TRS Drawbot, experiment with the different effects you can create by changing pens, substituting in other marking tools like pencils or crayons, working on different types of paper, adjusting the hardware, and tweaking the WAVE synthesizer parameters. 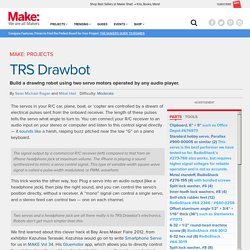 Pens that "bleed" into the paper can create interesting effects at slower drawing speeds. For instance, dramatically increasing the endpoint "dwell" time in the WAVE Synthesizer code to a second or longer causes an interesting "connect-the-dots" effect with a felt-tip marker. Likewise, the amount of sliding friction under the forearm will affect line quality.

If the forearm does not make contact with the page surface at all, and is resting only lightly on the pen tip, the pen's movements will be faster but less stable; sometimes a "shaking" phenomenon occurs that creates an interesting sketch-like effect. Will it Work with My Device? General Troubleshooting Early TRS Drawbot prototype test. Going Further.

Magic Train Puts Kids on Track with Physics of Magnetism. Assembling a simple wooden train and track with cleverly placed magnetic strips lets kids experiment with a train that levitates off the track and zips effortlessly from one end to the other when pushed. 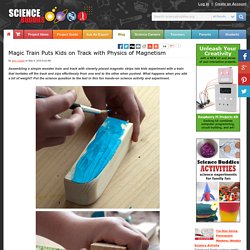 What happens when you add a bit of weight? Put the science question to the test in this fun hands-on science activity and experiment. The allure of a magic trick is something pretty cool to most kids. Make: DIY Projects, How-Tos, Electronics, Crafts and Ideas for Makers. When I was a teen, I did an astronomy (and archeology) summer camp one year. 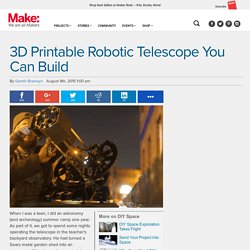 Painting Gorgeous Colors onto Copper Using Only An Open Flame. Flame painting is a type of copper craftsmanship that radiates with vivid colors made from flame. 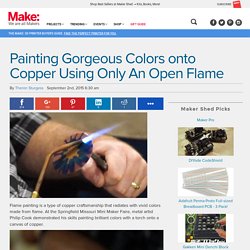 At the Springfield Missouri Mini Maker Faire, metal artist Philip Cook demonstrated his skills painting brilliant colors with a torch onto a canvas of copper. Cook showed how flame painting works. The copper is cut into a shape or object, then it’s heated in a progressive, layered manner. Cook colors the metal using an adjustable flame torch. He fine tunes the flame like a painter chooses a different width brush, allowing him to choose the level of detail. The duration of time under flame determines the color as the copper shifts through several predictable stages of color transformation.

Colors and patterns are made, then the metal is cooled with a fan. How Middle Schoolers Reinvented the First Text Message System. On a visit to Sutherland Middle School in Albemarle County, Virginia, I saw groups of students building a motor out of 3D-printed and laser-cut parts plus coat-hanger wire. 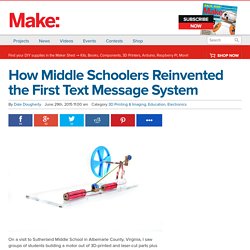 Up on the screen at the front of the class was a 3D simulation of the motor. The teacher, Robbie Munsey, explained that the students were re-creating a Page motor, named after its inventor, Charles Graton Page, and that the invention was patented in 1854. “Looking at historical inventions is a way for students to interact with technology and understand it,” says Munsey, who, dissatisfied with the science curriculum, wanted to employ more hands-on learning.

A Page motor makes it clear what a motor does and how it works, and actually building it brings this home to students. Initially, Munsey struggled with hard to obtain supplies for more complex projects. C64 Flash Cart. Make: DIY Projects, How-Tos, Electronics, Crafts and Ideas for Makers. When we published the Tooth and Nail brain teaser here on Make: back in February, it got a large and enthusiastic response. 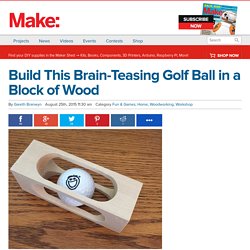 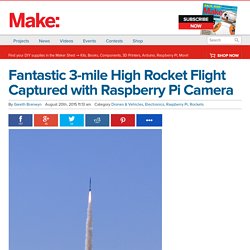 PSAS is a student-based open source rocketry group out of Portland State University. They make all of their design files, flight data, documentation, launch procedures, etc. available on GitHub. PSAS has a history of pushing the envelope in amateur rocketry and they still have much loftier goals in sight. The L-12 rocket flight, the group’s thirteenth launch, took off above the Central Oregon desert at 11:15am Pacific, July 19th, 2015. The over 13′ tall lift-vehicle 2 (LV2.3) used a Cesaroni Technology (CTI) N-motor (N2501-W) to propel the rocket to an altitude of 5 kilometers (over 3 miles). On-board were two Raspberry Pi computers with HD video cameras streaming live footage to the ground over a WiFi telemetry system. You can view a complete photo gallery of the L-12 launch on the group’s Flickr page. The group’s long term goal is to eventually put a tiny satellite into orbit. Make: DIY Projects, How-Tos, Electronics, Crafts and Ideas for Makers. This video of YouTuber Al Zh demonstrating his working six-cylinder engine made of paper is a real WOW. 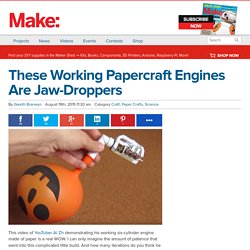 I can only imagine the amount of patience that went into this complicated little build. And how many iterations do you think he had to go through to get to this point? I get paper cuts just thinking about it! The V6 was built with little more than paper, scissors, glue, and tape. (And whatever material he used for the drive belt.) Giant Playable Wooden Game Boy Advance. This wooden Game Boy Advance created by Ryan Bates of RetroBuiltGames is the solution to hipster gaming on the go. Its 9″ screen is 300% bigger than the original Game Boy Advance.

Controlling a Robot with a Wearable Lego Exosuit. As if we needed further proof that Lego bricks are amazing, maker Danny Benedettelli has shown one of the coolest uses for them yet. Using a combination of Lego bricks and other electronics, Benedettelli built a humanoid robot that is controlled wirelessly by a wearable “exosuit.” This means that by simply wearing the suit, he can make the robot perform a movement just by acting it out himself. The robot, which is a new version of Benedettelli’s Cyclops project that was originally created four years ago, was built using the Lego Mindstorms NXT system and an Android cell phone running his own Android app. Star Wars Etched glasses, instructions inside! - Album on Imgur. How To Make a Speaker. I doesn't look like a high-tech speaker but it works well. I didn't expect a high quality of the sound from this made-from-scratch speaker but it performs very well, better than I expected.

A speaker is just a magnet, a coil, frame and a cone or any material that can make the air vibrate. Here is the bill of materials that I used to build this speaker: 1 Magnet (neodymium magnet works great) 1 Business card Wire 32 or 34 AWG (you may use 30AWG) Paper bond Tape Glue Scissors Ballpoint pen Lego bricks or wood. Ruler. Cut two long pieces of paper vertically, half inch wide. (0.5 inches by 11 inches). Roll one strip of paper over the magnet. Roll the second strip of paper over the first one. Using the ballpoint pen, Draw three lines on each side of the business card. Fold the business card using the lines as reference.

Make This Drawbot From Two Old CD Drives. You may not know it, but your old computer CD ROM drive is a treasure chest of useful components.