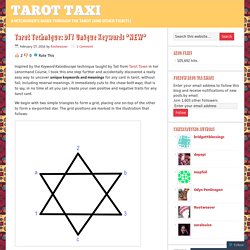 It immediately cuts to the chase both ways; that is to say, in no time at all you can create your own positive and negative traits for any tarot card. We begin with two simple triangles to form a grid, placing one on-top of the other to form a six-pointed star. The grid positions are marked in the illustration that follows: In positions 1,2 & 3 write down existing keywords that apply to the card you are working on, these can be found in most tarot books and deck LWB’s. In my example I am focussing on The Fool card. 1. 2. 3. Next, in positions A,B & C we are going to create a new keyword by merging existing keywords together. Now, do the same for position ‘C’ combining keywords 1 & 3. Tarot Spreads: Pyramid. Recently, I have tried to address some of the content balance on this site. 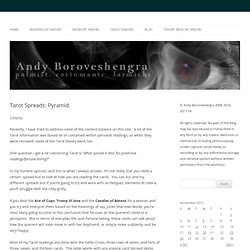 Tarot Meanings: Pips Together. A lot of traditional cartomancy (which means to read cards, so if you are using cards in any way you are practising cartomancy – even if you follow Camoin or Waite) was done by card interacting. 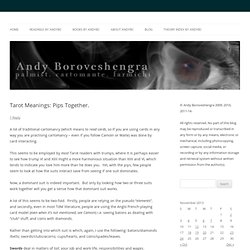 This seems to be employed by most Tarot readers with trumps, where it is perhaps easier to see how trump VI and XIIII might a more harmonious situation than XIIII and VI, which tends to indicate you love him more than he does you. Yet, with the pips, few people seem to look at how the suits interact save from seeing if one suit dominates. Now, a dominant suit is indeed important. But only by looking how two or three suits work together will you get a sense how that dominant suit works. A lot of this seems to be two-fold. Rather than getting into which suit is which, again, I use the following: batons/diamonds/bells; swords/clubs/acorns; cups/hearts, and coins/spades/leaves. Swords deal in matters of toil, your job and work life, responsibilities and wages.

Tarot Spread: Reading the Celtic-Cross. The Celtic-Cross has cropped up a few times this week on several social platforms I use, with discussions about whether it’s difficult or how best it should be used. 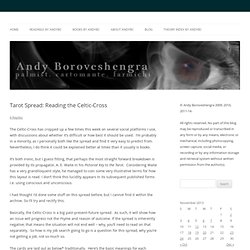 I’m probably in a minority, as I personally both like the spread and find it very easy to predict from. Nevertheless, I do think it could be explained better at times than it usually is books. Tarot Cards: Linking Things Together. Whilst most people can, eventually, learn individual cards’ meanings quite a few people struggle linking them into statements i.e. a sentence or two. 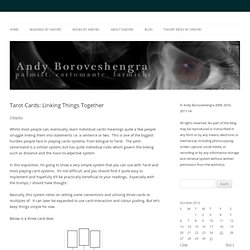 This is one of the biggest hurdles people face in playing cards systems, from bésigue to Tarot. The petit-Lenormand is a similar system, but has quite individual rules which govern the linking such as distance and the noun-to-adjective system. In this exposition, I’m going to show a very simple system that you can use with Tarot and most playing-card systems. It’s not difficult, and you should find it quite easy to implement and hopefully it’ll be practically beneficial to your readings. Especially with the trumps, I should have thought.

Tarot, Astrology and Life: Romani Spread - Lenormand - and how to read it. The Romani Spread can be used for both males and females with Lenormand Cards, normal Playing Cards or Tarot Cards, for a comprehensive reading. 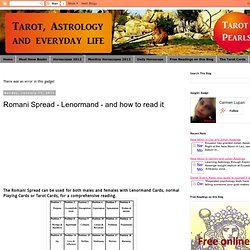 When you use the Lenormands in a reading, you want to choose a significator. If the reading is done for a woman, you choose the The Lady and start your reading there. Tree-of-life-showing-tarot-keys-ja-2012. Techniques And Methods For Learning Tarot Card Combinations. Learning how to combine Tarot cards with each other is one of the most exciting ways to deepen a relationship with the Tarot. 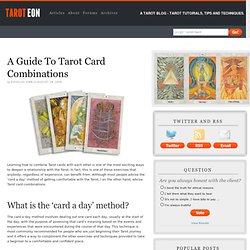 In fact, this is one of those exercises that anybody, regardless of experience, can benefit from. Although most people advise the ‘card a day’ method of getting comfortable with the Tarot, I on the other hand, advise Tarot card combinations. What is the ‘card a day’ method? The card a day method involves dealing out one card each day, usually at the start of the day, with the purpose of assessing that card’s meaning based on the events and experiences that were encountered during the course of that day.

Groups of tarot cards in a reading. Once you are familiar with the divinatory meanings of the cards, you can start to look at groups of cards that are similar. 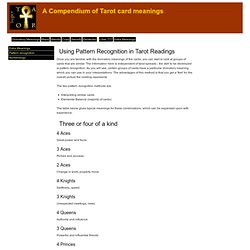 The information here is independent of tarot spreads - the skill to be developed is pattern recognition. As you will see, certain groups of cards have a particular divinatory meaning which you can use in your interpretations. The advantages of this method is that you get a 'feel' for the overall picture the reading represents. The two pattern recognition methods are: Interpreting similar cards Elemental Balance (majority of cards) The table below gives typical meanings for these combinations, which can be expanded upon with experience. 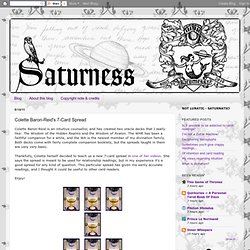 The WHR has been a faithful companion for a while, and the WA is the newest member of my divination family. Both decks come with fairly complete companion booklets, but the spreads taught in them are very very basic. Thankfully, Colette herself decided to teach us a new 7-card spread in one of her videos. She says the spread is meant to be used for relationship readings, but in my experience it's a good spread for any kind of question.