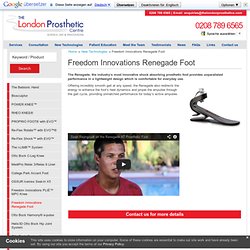 Sistema. UW Design 2012. The Show The Work The Cast Surprise Me JongChoi simple yet sophisticated iPad Case It is an IPAD case with better grip, place for stylus, wider range of viewing angle. 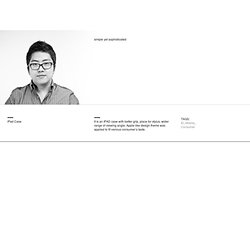 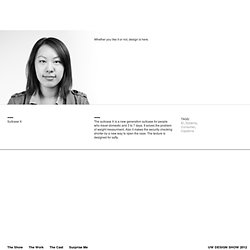 Suitcase X The suitcase X is a new generation suitcase for people who travel domestic and 3 to 7 days. ID, Systems, Consumer, Capstone Prosthetic Leg This prosthetic leg is designed for diabetic patients who are above 65 years old. ID, Medical Shockmetrics The Shockmetric project focuses on the form and interaction design of the new generation of medical device. 04-Articulo%20B2. Art%C3%ADculo_Dise%C3%B1o%20Pr%C3%B3tesis%20Transtibial%20Infantil%20y%20Validaci%C3%B3n%20a%20Trav%C3%A9s%20de%20Pruebas%20de%20Usuario_PDF. Ruiz_Manuel,_tablas_antropometricas.pdf. Hafner. Biology-biomedical_services_200807171322092.

HowStuffWorks "Making Prosthetic Limbs" Because each patient and his or her amputation are unique, each prosthetic limb must be custom fitted and then built. 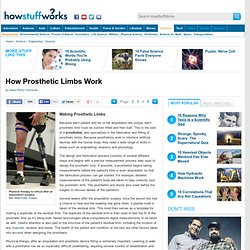 This is the task of a prosthetist, who specializes in the fabrication and fitting of prosthetic limbs. Because prosthetists work to interface artificial devices with the human body, they need a wide range of skills in areas such as engineering, anatomy and physiology. The design and fabrication process consists of several different steps and begins with a precise measurement process later used to design the prosthetic limb. Tutorial Videos. InMotion: A Brief History of Prosthetics. From the ancient pyramids to World War I, the prosthetic field has morphed into a sophisticated example of man's determination to do better. 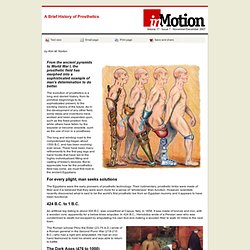 The evolution of prosthetics is a long and storied history, from its primitive beginnings to its sophisticated present, to the exciting visions of the future. As in the development of any other field, some ideas and inventions have worked and been expanded upon, such as the fixed-position foot, while others have fallen by the wayside or become obsolete, such as the use of iron in a prosthesis.

Aimee Mullins: How my legs give me super powers. Aimee Mullins: Running on high-tech legs. Janine Shepherd: A broken body isn't a broken person. Skin-like sensor for prosthetic limbs, robotics and touch-sensitive screens. Using carbon nanotubes bent to act as springs, Stanford researchers have developed a stretchable, transparent skin-like sensor that can be stretched to more than twice its original length and bounce back perfectly to its original shape. 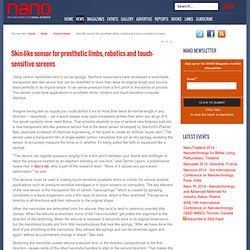 It can sense pressure from a firm pinch to thousands of pounds. The sensor could have applications in prosthetic limbs, robotics and touch-sensitive computer displays. Imagine having skin so supple you could stretch it out to more than twice its normal length in any direction – repeatedly – yet it would always snap back completely wrinkle-free when you let go of it. You would certainly never need Botox. That enviable elasticity is one of several new features built into a new transparent skin-like pressure sensor that is the latest sensor developed by Stanford's Zhenan Bao, associate professor of chemical engineering, in her quest to create an artificial "super skin.

" Prosthesis Re-creates Sensation of Touch. A man whose hand and lower arm were amputated could sense shapes and stiffness and modulate the force of his grasp using a prosthetic hand that was temporarily wired to nerves in his upper arm. 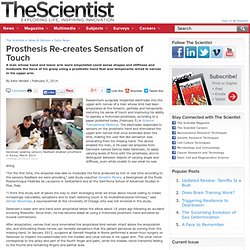 Sørensen wearing sensory feedback enabled prosthesis in Rome, March 2013.LIFEHAND 2/PATRIZIA TOCCIResearchers surgically implanted electrodes into the upper-arm nerves of a man whose limb had been amputated at the forearm, partially and temporarily restoring his sense of touch and improving his ability to operate a motorized prosthesis, according to a paper published today (February 5) in Science Translational Medicine. The electrodes responded to sensors on the prosthetic hand and stimulated the upper-arm nerves that once extended down the limb, making the user feel like sensation was emanating from his missing hand.

Sørensen’s lower arm and hand were amputated below the elbow about 10 years ago following an accident involving fireworks. S. New generation bionics - wireless and touch-sensitive. 14 March 2012Last updated at 03:49 ET By Neil Bowdler Health reporter, BBC News EPFL's Dr Stephanie Lacour shows the BBC around her lab and describes what flexible electronics could do A new generation of bionics which can connect wirelessly with the nervous system and feel are under development. 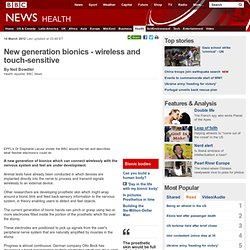 Animal tests have already been conducted in which devices are implanted directly into the nerve to process and transmit signals wirelessly to an external device. Other researchers are developing prosthetic skin which might wrap around a bionic limb and feed back sensory information to the nervous system, in theory enabling users to detect and feel objects. A step forward for touch-sensitive prosthetic limbs. Star-Telegram. By Robert Cadwallader rcadwallader@star-telegram.com MANSFIELD — Jayme Sims of Spring lost the fingers of his right hand to a wood chipper in January. 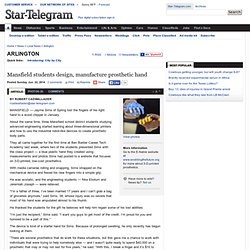 About the same time, three Mansfield school district students studying advanced engineering started learning about three-dimensional printers and how to use the industrial robot-like devices to create prosthetic body parts. A New Approach to Prosthetic Design and Integration - Next Einstein. The Art of Prosthetics. Close up of Ryan Seary’s “Removable Muscles” leg, photographed by Omkaar Kotedia A good friend of mine named Lucas Ryan heard that I was working on a video about transhumanism and prostheses — probably because I can’t stop talking about how much I love working on this show — and pointed me in the direction of the Alternative Limb Project. 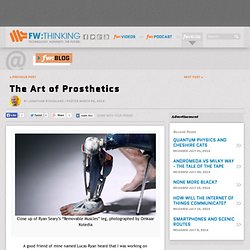 This project’s purpose is to make customized prosthetic limbs that are more than an artificial arm or leg. They are also an extension of the owner’s personality. A quick glimpse at the images available on the site will give you an idea about the amazing customization project director Sophie de Oliveira Barata offers her clients. Prosthetics: A Design for Human Variability. Elements of Prosthetic legs. The structural interface (Socket) is the top part of prosthetic that connects to body in order to maneuver. Soft tissue interface allow movement. Skeleton system connects the joint system and socket. Suspension system suppresses pressure. Flex – Foot or also. 3d printed prosthetics. Elias and Jorge, both from Paraguay, “Fist bump” during a photo shoot with their new Po Paraguay e-NABLE devices.

In early 2014, medical student Eric Dijkhuis and electronic engineer Fernando Vallese, both from Paraguay, found themselves stumbling onto the enablingthefuture.org website and explored the ever growing e-NABLE Community Google+ group where approximately 200 volunteers (now over 6500!) Had started gathering and planning ways in which they were going to “change the world” with 3D printed hands. The pair immediately volunteered to be translators and volunteers for the community with the aim to extend e-NABLE’s work into their home country and eventually their non-profit, Po Paraguay, was born. Prosthetics meet robotics. Prosthetics for athletes. DP&O Design Prosthetics Orthotics. Our Certified Prosthetists are highly trained, skilled professionals, experienced in the evaluation, design and fabrication of prostheses for patients who have experienced some type of limb loss or deformity.

At DP&O we pride ourselves on always being on the cutting edge of all advancements in the field of Prosthetics and providing the optimal patient care to ensure these advancements are applied correctly for each patient. A Prosthetist specializes in the assessment of the amputees needs and the design of custom-made prosthesis. We work to interface artificial limbs with the human body utilizing many skills such as biomechanics, anatomy and physiology. Modern prosthetic limbs have advanced newer materials like plastics and carbon-fiber composites. These make your prosthetic limb lighter, stronger and more realistic. 'Terminator' arm is world's most advanced prosthetic limb. Scott Summit: Beautiful artificial limbs. Mind Controlled Bionic Limbs. In the George Lucas classic Star Wars, hero Luke Skywalker’s arm is severed and amputated during a lightsaber fight and consequently fitted with a bionic arm that he can use as if it were his own limb.

At the time the script was written, such a remedy was pure science fiction; however, the ability to manufacture bionic arms that have the functionality and even feel of a natural limb is becoming very real, with goals of launching a prototype as soon as 2009. Already, primates have been trained to feed themselves using a robotic arm merely by thinking about it, while brain sensors have been picking up their brain-signal patterns since 2003.

The time has come for implementing this technology on paralyzed human patients and amputees. This article will provide a brief explanation of the technology, its current status, and the potential future it holds. Bionic Research Background. Bionics. First sensory-enhanced artificial hand enables amputee to 'feel' Scientists Identify Gene Required for Nerve Regeneration. A gene that is associated with regeneration of injured nerve cells has been identified by a team of researchers led by Prof Melissa Rolls of Penn State University. In fruit flies with two normal copies of the spastin gene, a team of scientists led by Prof Melissa Rolls of Penn State University found that severed axons were able to regenerate.

A bioengineered patch that regrows damaged bones inside the body.