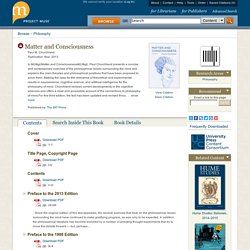 Churchland Publication Year: 2013 show less In <I>Matter and Consciousness</I>, Paul Churchland presents a concise and contemporary overview of the philosophical issues surrounding the mind and explains the main theories and philosophical positions that have been proposed to solve them. Making the case for the relevance of theoretical and experimental results in neuroscience, cognitive science, and artificial intelligence for the philosophy of mind, Churchland reviews current developments in the cognitive sciences and offers a clear and accessible account of the connections to philosophy of mind.For this third edition, the text has been updated and revised throu . . . show more Published by: The MIT Press Preface to the 2013 Edition Download PDF pp. vii-viii ...Since the original edition of this text appeared, the several sciences that bear on the philosophical issues surrounding the mind have continued to make gratifying progress, as was only to be expected.

Download PDF pp. ix-x. The Garbage Generation: On the Need for Patriarchy. This book outlines the consequences of the destruction of the two-parent family and the need to stabilize it by strengthening its weakest natural link, the role of the biological father. 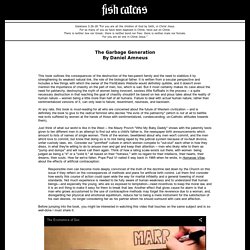 It is written from a secular perspective and includes a few things with which the owner of the FishEaters Website would definitely quibble, and it doesn't even mention the importance of chastity on the part of men, too, which is sad. But it most certainly makes its case about the need for patriarchy, destroying the myth of women being innocent, sexless little fluffballs in the process -- a quite necessary destruction in that reaching the goal of chastity shouldn't be based on lies and pious tales about the reality of human nature -- women being a little more than half of all humans. Failure to deal with actual human nature, rather than sentimentalized versions of it, can only lead to failure, resentment, neuroses, and backlash. Now, on to "The Garbage Generation"... 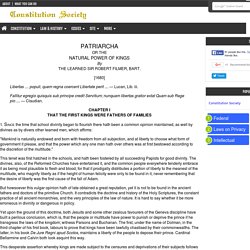 Libertas .... populi, quem regna coercent Libertate perit .... — Lucan, Lib. iii. Fallitur egregio quisquis sub principe credit Servitium; nunquam libertas gratior extat Quam sub Rege pio .... — Claudian. 1. SINCE the time that school divinity began to flourish there hath been a common opinion maintained, as well by divines as by divers other learned men, which affirms: "Mankind is naturally endowed and born with freedom from all subjection, and at liberty to choose what form of government it please, and that the power which any one man hath over others was at first bestowed according to the discretion of the multitude.

" This tenet was first hatched in the schools, and hath been fostered by all succeeding Papists for good divinity. But howsoever this vulgar opinion hath of late obtained a great reputation, yet it is not to be found in the ancient fathers and doctors of the primitive Church. 2. 3. 4. 5. 6. 7. 8. 9. . (2.) CultureOfCritique. Report from Iron Mountain. Propaganda by Edward Bernays (1928) By Edward Bernays THE conscious and intelligent manipulation of the organized habits and opinions of the masses is an important element in democratic society. 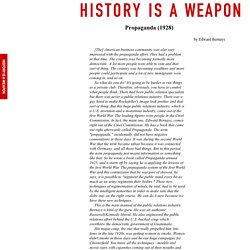 Those who manipulate this unseen mechanism of society constitute an invisible government which is the true ruling power of our country. We are governed, our minds are molded, our tastes formed, our ideas suggested, largely by men we have never heard of. This is a logical result of the way in which our democratic society is organized. Vast numbers of human beings must cooperate in this manner if they are to live together as a smoothly functioning society. "Modern means of communication—the power afforded by print, telephone, wireless and so forth, of rapidly putting through directive strategic or technical conceptions to a great number of cooperating centers, of getting quick replies and effective discussion—have opened up a new world of political processes. What Mr. "YOU buy a Mozart piano now. Don't Take My Word for It...Take Theirs: The Best A/V Books and Courses.

Something's in the air - it must be time for some summer reading. 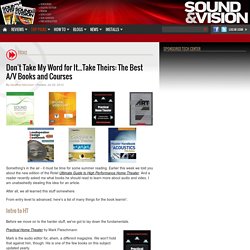 Earlier this week we told you about the new edition of the Rotel Ultimate Guide to High Performance Home Theater. And a reader recently asked me what books he should read to learn more about audio and video. I am unabashedly stealing this idea for an article. After all, we all learned this stuff somewhere. From entry level to advanced, here's a list of many things for the book learnin'. Intro to HT Before we move on to the harder stuff, we've got to lay down the fundamentals.