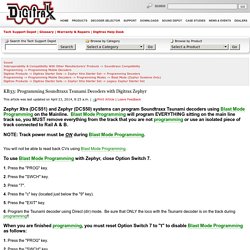 The World's Best Photos of cnw and rta. Flickr Hive Mind is a data mining tool for the Flickr database of photography. 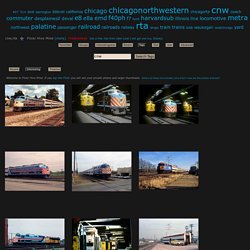 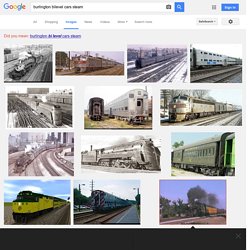 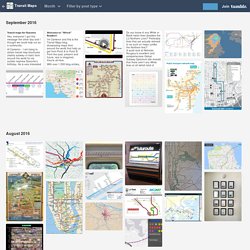 The following can also be found in the new “Support the Site” page on the web version of Transit Maps, but I thought I’d also cross-post here for those who access the site through the Tumblr dashboard. Recently, I was shocked to be unilaterally dismissed from the Adsense advertising program by Google. No warning was given: Google just shut my account down overnight as they seem to believe that I was somehow influencing ad clicks on the site. I’ve never attempted anything like this and have never asked anyone to click on ads on my site, but their algorithms believe otherwise and that’s the end of the matter as far as they’re concerned.

In the almost five years that the blog has been running, the ads on the site had grown into a modest but steady income stream – enough to compensate me for my time and cover hosting costs for this blog and my personal design site at cambooth.net. 1. Donate as little as $3 (the cost of a cup of coffee) via Ko-Fi 2. CV Information and Tools. Click here to use our CV29 Calculator Features Controlled by CV29 Speed step control: Advanced Mode (28/128 speed steps) or Standard Mode (14 speed steps).Speed table ON or OFFAnalog mode conversion ON or OFFNormal Direction of Travel (NDOT)2 digit addressing or 4 digit addressing The value you program into CV29 sets all of these 5 characteristics. 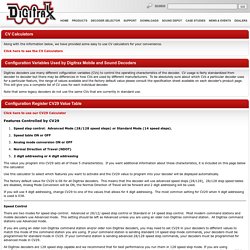 If you want additional information about these characteristics, it is included on this page below the calculator. Use this calculator to select which features you want to activate and the CV29 value to program into your decoder will be displayed automatically. Notice RIR October 2016. Looking for RI, or Successor Shortline: Important events or calendar notices Personal modeling project updates Photos Stories New products or services Your collections Our readers want to know what you are up to on the Rock Island, its predecessor roads, or its resulting short lines. 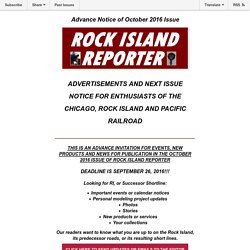 8 Original Cable Car Companies. Editor’s Note – The routes shown below are for each line at its maximum length, as operated by one of the eight original San Francisco cable car companies. 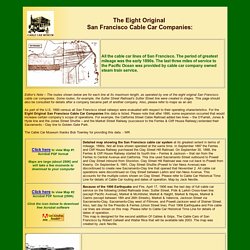 Some routes, for example, the Sutter Street Railroad’s Sutter Street line were created in stages. This page should also be consulted for details after a company became part of another company. Also, please refer to maps as an aid. Pictures of CRIP 271. Rock Island 2-8-2 "Mikado" Locomotives of the USA. In 1911 the Chicago, Rock Island & Pacific Railway needed higher speed so it designed a new 2-8-2 Locomotive. 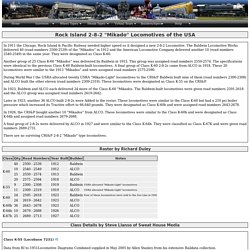 The specifications were identical to the previous Class K-60 Baldwin-built locomotives. During World War I the USRA allocated twenty USRA "Mikado-Light" locomotives to the CRI&P. In 1923, Baldwin and ALCO each delivered 24 more of the Class K-60 "Mikados. Later in 1923, another 36 ALCO-built 2-8-2s were Added to the roster. In 1926, the CRI&P bought another 10 "Mikados" from ALCO. A final group of 2-8-2s were delivered by ALCO in 1927 and were similar to the Class K-64b. Rock island steam loco 2550. Walschaerts valve gear. CRI&P S2 722. Rock Island 2-8-2 "Mikado" Locomotives of the USA. Chicago in Maps. Viewing North America/Illinois1901e2.sid. American Geographical Society Library Digital Map Collection. OriginalImageObj.width: 7665originalImageObj.height: 9083 currentImageTop: 15pxcurrentImageLeft: 289.5px viewportObj.width: 958viewportObj.height: 484viewportObj.left: 31viewportObj.top: 323. 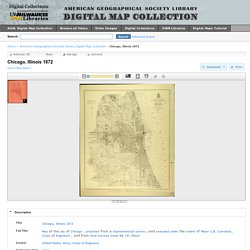 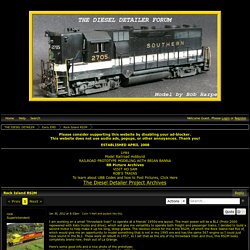 The main power will be a BL2 (Proto 2000 repowered with Kato trucks and drive), which will give me versatility to operate both freight and passenger trains. I decided to build a second motor to help make it up his long, steep grades. The obvious choice for me is the RS2M, of which the Rock Island had five of, which would give me an opportunity to model something that is not in my 1995 era and has the same 567 engine so I could just have sound in the BL2. These were all rebuilt in 1957, so I set that as the era of my throwback train and thus, this RS2M looks completely brand new, fresh out of La Grange. Here's some good info and a nice photo of the prototype:www.rockisl.com/cgi-bin/display.asp? I started with a Kato RS2M (decorated for D&H). Then I cut off the Alco long hood and cut off an undec GP9 long hood from Front Range Products.

Vintage Front Range Rock Island GP7. " always find the numberboards tricky to decal as each of them needs four individual numbers and the decals are so small it can be a real challenge to get them straight and even. For this model I decided to try printing my own numberboard decals, I had already fitted a set of Microscale EMD blank decals so all I needed were the numbers. There is a windows compatible truetype font on the B&O historical society website for free downloaded. I typeset the numbers in Photoshop and printed on laser printer compatible waterslide paper.

They went on really easily and were certiainly a breeze compared to lining up tiny individual numbers. " I do my number boards the similar way, on plain paper with an extra step. Get a piece of stiff clear plastic from a discarded blister package and mix a few drops of epoxy on it. Plastico ferroviario , modellismo ferroviario - ilplasticodifilippos JimdoPage! Video: Benchwork for the Eagle Mountain RR. CRIP 451(RS-2m) Pictures of CRIP 451. CHICAGO NORTH SHORE AND MILWAUKEE RAILROAD.

Vintage Railroad And Train Photo Gallery by Gary Holt at pbase.com. Chicago Surface Lines Photos, Part Three. Bill Shapotkin writes: “This pic is on the Riverdale line. The location is JUST SOUTH of 130th St (the tracks on the embankment are the IC). View looks E-N/E.” George Trapp: “CSL #2595 is on Riverdale line, side sign reads Michigan-Indiana.” M. E. writes: “The first picture is on the Riverdale line, which ran south along the west side of the Illinois Central main line, then under the IC, then south to Riverdale.”The car number looks like 2595, making this a “Robertson” car, built by St.

Thanks to the generosity of George Trapp, here is another generous helping of classic Chicago Surface Lines streetcar photos from his collection. Most of these pictures date to the “red car” era in Chicago, which began in the early 1920s and ended in 1954. As always, if you can help identify locations, or have interesting facts or reminiscences to add, don’t hesitate to drop us a line. Thetrolleydodger@gmail.com -David Sadowski. CR&IP GP7 1265 at Ottawa, IL in July 1963. Sanborn Fire Insurance Maps (G&M Reading Room, Library of Congress) Search by: Fire Insurance Maps in the Library of Congress. 1981 Please note: There are over 50,000 hits for United States in this database.

2-6-6-6 "Allegheny" Locomotives in the USA. What was the most powerful steam locomotives ever built? The Big Boy? Nope. What was the heaviest steam locomotive ever built? The Big Boy? Well, maybe, maybe not. In the 1930s, the C&O improved its railroad by boring new tunnels and enlarging others. This design was a six-coupled, single-expansion articulated with 67" diameter drivers for speed, a 9' x 15' firebox with a very large boiler for steaming and 778,000 pounds of locomotive weight to assure tractive effort. Chicago ''L''.org: Operations - Freight Service on the ''L'' Chicago Area Shortline Railroads - Chicago Terminal. Chicago Area Shortline Railroads Reporting Marks: CTM History Incorported:06/06/2006, started 02/02/2007 Operation #1: Purchased right-of-way from Canadian Pacific Railway known as the C&E line. Operation #2: Took over switching of the Centrex Industrial Park in Elk Grove Village, 5/1/2007 Operation #3: Took over switching from Canadian Pacific Railway of the Bensenville Industrial Park, 12/7/2007 Owned by Permian Basin Rwy, a subsidary of Iowa Pacific Holdings.

Right of Way. Chicago Switching. 'Argentina' - L.D.Porta's First Locomotive. 'Argentina' Built 1949 by Ing. Livio Dante Porta & Co. Ltd. L.D.Porta's First 'Victim' - A Metre Gauge 4 Cylinder Compound 4-8-0. December 2009. One of the problems I am encountering in this project relates to the "O" scale civil war era figures. While there is a pretty good selection of 40mm civil war era figures available, such as from the Sash and Saber, and the Honorable Lead and Boiler Suit (HLBS) company, they are intended for wargaming. Lou Gerard. History, Architecture, and Infrastructure. Introduction On the evening of July 30, 1939, Nancy Froemming “and her ambition” boarded a train in Milwaukee bound for Chicago.

Miss Froemming — who thought that she “could sing with the best of them” — had decided that Milwaukee was too small of a town for her nascent singing career and set her sights on the hustle-and-bustle of Chicago. So off she went. There were only two problems with Miss Froemming’s plan: she was 13 years old, and the train she boarded was a freight line — the Bloomingdale Line. Upon alighting at Western Avenue, instead of booking a gig at the Cloister Inn or the Sunset Cafe, Miss Froemming was booked at Juvenile Hall.0.1.

Home > CNWHS Gallery - Welcome to the CNWHS Photo Gallery! The Weed Route. Chicago Rail Junctions - Other South Side Crossings. Four additional locations of interest, plus briefer coverage of some historically important sites. However, most of these locations are now off limits or provide less than ideal legal access. 16th Street Crossing Located at Clark and 16th streets, this junction can be reached by driving south on Clark from downtown. Unfortunately, there is no public access to the interlocking. Running north-south through here is Metra's ex-Rock Island commuter line from Joliet; it terminates at LaSalle Street Station, about a mile to the north. CV29Explained.pdf. The Chicago, North Shore, & Milwaukee Railroad.

The Chicago, North Shore & Milwaukee Railroad (reporting marks, CNSM), fondly remembered as "The North Shore Line" to distinguish it from its southern counterpart the Chicago, SouthShore & South Bend ("The South Shore Line"), was one of the most successful interurban systems ever put together. The history of the company dated as far back as the 1890s and in terms of the passenger traffic it carried during its peak years of operations, only the Pacific Electric Railway rivaled it for the busiest interurban in history.

AS ILLUSTRATED BY THE INFORMATION ON TRACING THE YV, much of the YV is gone but there are places along the old route where you can still imagine what it was like during the years that the railroad was in operation. Mixed power on the Capitol Limited - Classic Trains Magazine. Chicago Terminal Railroad. Chicago Terminal Railway Introduction Chicago Terminal Railroad operates three segments of track in the city and suburbs, serving a variety of industries. The Railroad connects to Union Pacific at the North Avenue and Elk Grove locations, and to Canadian Pacific at the Bensenville location. History. Chicago Switching. BUDD RDC PHOTO INDEXES - READING & NORTHERN to YREKA WESTERN.