1608_SilowCarroll_using_EHRs_improve_quality.pdf. EMR Updates. In my previous post about the EHR certification costs, a reader emailed me that I’d missed an important downstream cost. 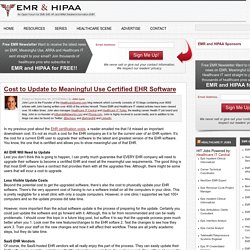 It’s not as much a cost for the EHR company as it is for the current user of an EHR system. It’s the cost for a current EHR user to upgrade their software to the latest and greatest version of the EHR software. You know, the one that is certified and allows you to show meaningful use of that EHR. All EHR Will Need to Update Lest you don’t think this is going to happen, I can pretty much guarantee that EVERY EHR company will need to upgrade their software to become a certified EHR and meet all the meaningful use requirements.

The good thing is that most EHR users have a contract that provides them with all the upgrades free. Less Visible Update Costs Beyond the potential cost to get the upgraded software, there’s also the cost to physically update your EHR software. News. Lessons from Canada: $1.3 billion in long term EHR benefits. A new PricewaterhouseCoopers (PwC) study commissioned by Canada Health Infoway, our northern neighbor’s equivalent of the ONC, reveals some encouraging news for EHR adopters who aren’t sure when or if they will see a return on investment (ROI) for their pricy EHR systems. 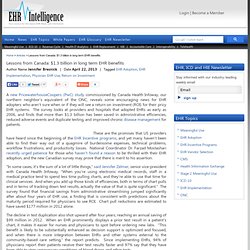 The survey looks at providers and hospitals that adopted EHRs as early as 2006, and finds that more than $1.3 billion has been saved in administrative efficiencies, reduced adverse events and duplicate testing, and improved chronic disease management for patients. Medicare Billing Rises at Hospitals With Electronic Records. But, in reality, the move to electronic health records may be contributing to billions of dollars in higher costs for , private insurers and patients by making it easier for hospitals and physicians to bill more for their services, whether or not they provide additional care. 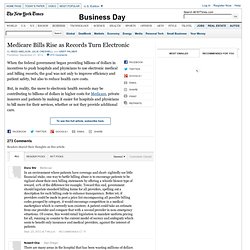 Hospitals received $1 billion more in Medicare reimbursements in 2010 than they did five years earlier, at least in part by changing the billing codes they assign to patients in emergency rooms, according to a New York Times analysis of Medicare data from the American Hospital Directory. Regulators say physicians have changed the way they bill for office visits similarly, increasing their payments by billions of dollars as well. For instance, the portion of patients that the emergency department at Faxton St. Luke’s Healthcare in Utica, N.Y., claimed required the highest levels of treatment — and thus higher reimbursements — rose 43 percent in 2009. Critics say the abuses are widespread. John Wilbanks: Let’s pool our medical data. Electronic health records shown to improve the quality of patient care. 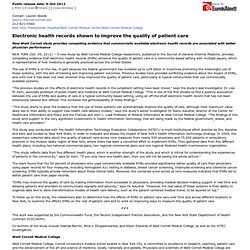 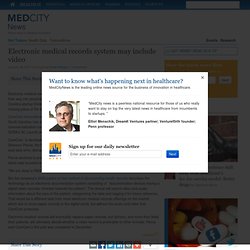 CareCam Innovations, based in Greenville, South Carolina, has received a $200,000 investment from SCRA, an applied research and commercialization company headquartered in Columbia, South Carolina. The funding came from SCRA’s SC Launch program, which supports startups. CareCam is developing an electronic medical records system based on video. The idea came to Shannon Pierce, the founder and president of CareCam, from her days working as a nurse. She said data entry distracts clinicians from patient care. Pierce declined to provide many details about the company’s technology, saying that CareCam, which was founded in 2004, has flown mostly under the radar.

“We are deep in R&D and many steps from commercialization,” she said. Copyright 2014 MedCity News. Hear the latest industry news first. The Ups and Downs of Electronic Medical Records - The Digital Doctor. Problem list problems with electronic medical records. In family medicine it has been common to keep a “Problem List” in patients’ paper charts. 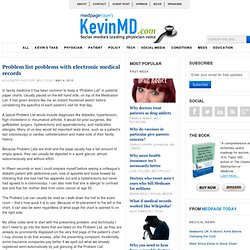 A Doctor's Problem With Electronic Records. Larry Magid: Benefits of Online Medical Records Outweigh the Risks. A couple of years ago I arrived at my hotel in Berlin after a 12 hour flight and noticed that I had forgotten to pack medication I was taking at the time. 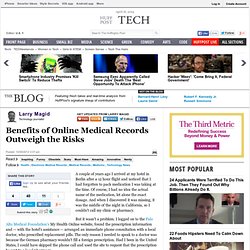 Of course, I had no idea the actual name of the medication, let alone the exact dosage. And when I discovered it was missing, it was the middle of the night in California, so I couldn't call my clinic or pharmacy. But it wasn't a problem. I logged on to the Palo Alto Medical Foundation's My Health Online website, found the prescription information and -- with the hotel's assistance -- arranged an immediate phone consultation with a local doctor, who prescribed replacement pills. The only reason I needed to speak to a doctor was because the German pharmacy wouldn't fill a foreign prescription. EMR Daily News — News of the day in Electronic Medical Records, EHR and HIT.

New Federal Rules Govern Funding for Electronic Medical Records. 'Sophisticated' EHR use by docs boosts preventive care rates for women. Women whose healthcare providers use electronic health records are more likely to receive preventive care, according to a study published this week in the Journal of the American Medical Informatics Association. 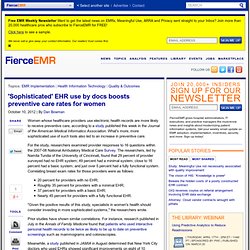 What's more, more sophisticated use of such tools also led to an increase in preventive care. For the study, researchers examined provider responses to 16 questions within the 2007-08 National Ambulatory Medical Care Survey. The researchers, led by Namita Tundia of the University of Cincinnati, found that 29 percent of provider surveyed had no EHR system; 49 percent had a minimal system; close to 16 percent had a basic system; and just over 5 percent had a fully functional system. Correlating breast exam rates for those providers were as follows: The Era of Electronic Medical Records. Twenty years ago the influential Institute of Medicine began prodding the medical community to embrace electronic medical records. 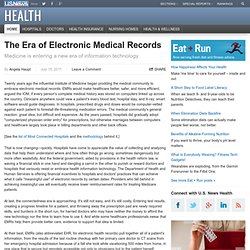 EMRs would make healthcare better, safer, and more efficient, argued the IOM, if every person's complete medical history was stored on computers linked up across the country. Clinicians anywhere could view a patient's every blood test, hospital stay, and X-ray; smart software would guide diagnoses. In hospitals, prescribed drugs and doses would be computer-vetted against each patient to forestall life-threatening medication errors. The medical community's general reaction: great idea, but difficult and expensive. As the years passed, hospitals did gradually adopt "computerized physician order entry" for prescriptions, but otherwise marriages between computers and healthcare largely took place in billing departments and other back offices. 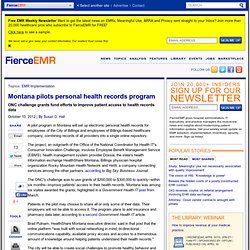 The ONC's challenge was to use grants of $200,000 to $300,000 to quickly--within six months--improve patients' access to their health records. Montana was among six states awarded the grants, highlighted in a Government Health IT post from March.