Reducing Disparities in Health Care. Recent studies have shown that despite the improvements in the overall health of the country, racial and ethnic minorities experience a lower quality of health care—they are less likely to receive routine medical care and face higher rates of morbidity and mortality than nonminorities. 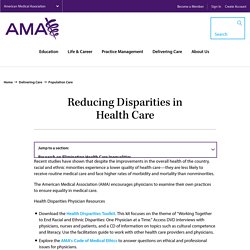 The American Medical Association (AMA) encourages physicians to examine their own practices to ensure equality in medical care. Health Disparities Physician Resources Download the Health Disparities Toolkit. This kit focuses on the theme of “Working Together to End Racial and Ethnic Disparities: One Physician at a Time.” Access DVD interviews with physicians, nurses and patients, and a CD of information on topics such as cultural competence and literacy. Research on Eliminating Health Care Inequalities The Institute of Medicine (IOM) performed an assessment on the differences in the kinds and quality of health care received by U.S. racial and ethnic minorities and nonminorities. NIH-sponsored expert panel issues clinical guidelines to prevent peanut allergy. News Release Thursday, January 5, 2017 Recommendations focus on introducing peanut-containing foods to infants. 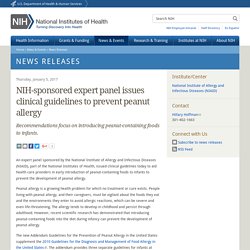 How And When To Safely Give Babies Peanut Butter? Allergists Explain. Peanuts and straight peanut butter are a choking hazard for infants, doctors say, but a bit of watered-down puree of peanut butter, starting at around 6-months-old, can help prevent peanut allergies. 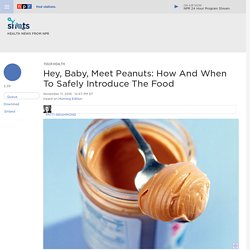 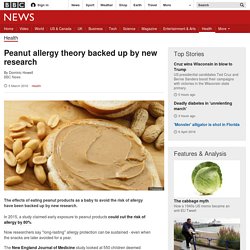 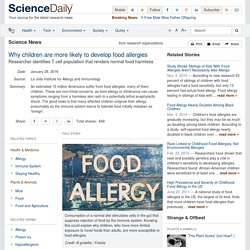 These are non-trivial concerns, as food allergy or intolerance can cause symptoms ranging from a harmless skin rash to a potentially lethal anaphylactic shock. The good news is that many affected children outgrow their allergy, presumably as the immune system learns to tolerate food initially mistaken as "foreign. " A new study published in the January 28, 2016, online issue of Science by La Jolla Institute for Allergy and Immunology (LJI) researcher Charles Surh, Ph.D., may explain how food tolerance emerges over time in normal individuals.

Coupling molecular approaches with a long-forgotten model of "antigen-free" mice, the study is the first to demonstrate that consumption of a normal diet stimulates cells in the gut that suppress rejection of food by the immune system. Like pathogens, food displays macromolecular markers known as antigens that announce to the immune system that food is "foreign.

" It's mom who sees troubles for teens with food allergies. Teens with allergies more likely to have depression, anxiety. 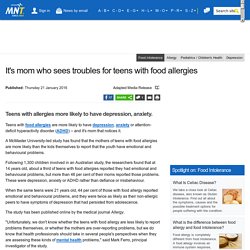 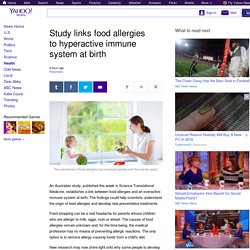 The findings could help scientists understand the origin of food allergies and develop new preventative treatments. Food shopping can be a real headache for parents whose children who are allergic to milk, eggs, nuts or wheat. The causes of food allergies remain unknown and, for the time being, the medical profession has no means of preventing allergic reactions. The only option is to remove allergy-causing foods from a child's diet. Food processing and allergenicity. Open Access Highlights Peanuts, tree nuts, cows' milk, hens' eggs, soy, wheat and mustard were reviewed. 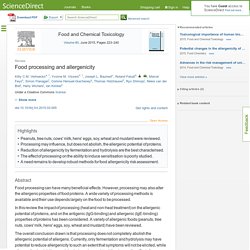 Processing may influence, but does not abolish, the allergenic potential of proteins. ‘Peanut Patch’ Heads to Phase III Trials. Posted at 3:17 pm by FARE, on July 13, 2015 DBV Technologies recently announced it has received the green light from the Food and Drug Administration (FDA) to begin a global Phase III trial using Viaskin® Peanut (also known as the “peanut patch”). 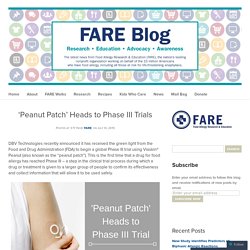 This is the first time that a drug for food allergy has reached Phase III – a step in the clinical trial process during which a drug or treatment is given to a larger group of people to confirm its effectiveness and collect information that will allow it to be used safely. The anticipated Phase III trial, Peanut EPIT Efficacy and Safety Study (PEPITES), which will enroll children ages 4 to 11, is expected to begin later this year following submission of the final clinical trial protocol and review by the FDA. PEPITES is planned as a randomized, double-blind, placebo-controlled trial with about 260 patients from 35 sites in North America, Australia and Europe.

Like this: Peanut Allergy Prevention: Introduce Infants Early and Often. Peanut allergies strike fear into the hearts of many parents, my patients included. 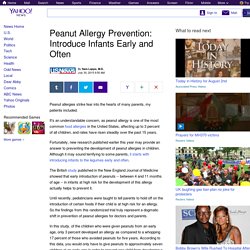 It's an understandable concern, as peanut allergy is one of the most common food allergies in the United States, affecting up to 3 percent of all children, and rates have risen steadily over the past 15 years. Fortunately, new research published earlier this year may provide an answer to preventing the development of peanut allergies in children. Although it may sound terrifying to some parents, it starts with introducing infants to the legumes early and often. The British study published in the New England Journal of Medicine showed that early introduction of peanuts -- between 4 and 11 months of age -- in infants at high risk for the development of this allergy actually helps to prevent it.

Until recently, pediatricians were taught to tell parents to hold off on the introduction of certain foods if their child is at high risk for an allergy. Oral Immunotherapy for Treatment of Egg Allergy in Children. Consensus_Communication_Submission_Unmarked. Risk of allergy to rhLF is low. NY Times - peanut study. Peanut Consumption in Infants at Risk for Peanut Allergy. In a famous “Peanuts” cartoon, a glum Charlie Brown sits alone on a bench, eating a sandwich; his thought bubble reads, “Nothing takes the taste out of peanut butter quite like unrequited love.” Charles Schulz was perhaps better than any other at simply and brilliantly capturing the timeless angst that defines the human condition.

A Kid Like Emmett: Raising a Child With Severe Food Allergies. New ultrasensitive test for peanut allergies. Current peanut allergy tests are not very reliable when it comes to diagnosing the severity of an individual's allergic reaction, which can range from hives to life-threatening anaphylactic shock. With an estimated three million people in the United States allergic to peanuts and tree nuts, having a more precise and reliable allergy test could prevent hospitalizations and allow for better monitoring of individuals suffering from peanut allergies. Three chemists at the University of Connecticut (UConn) are developing a more advanced peanut allergy test that, based on initial results, is many times more sensitive than current procedures.

The new test is capable of determining the potential intensity of a patient's allergic reaction through just a few drops of blood. Understanding how the new test works requires a basic understanding of how allergic reactions happen. When an allergic person eats peanuts, their immune system releases an antibody protein known as immunoglobulin E or IgE. Food allergy epidemic that experts fear may be caused by pollen and modern diet. Each year in the UK, ten people die and more than 5,000 are hospitalised after having allergic reactions to foodsFood allergies are more likely if you have asthma and eczemaAllergies can strike at any age and even when a food has never caused problems before By Cara Lee for the Daily Mail Published: 23:58 GMT, 15 December 2014 | Updated: 08:36 GMT, 16 December 2014 ‘I worry people think I’m fussy,’ said Ben Abbot, 37, who had an allergic reaction to a slice of lemon As the waiter approached his table, Ben Abbott knew he was in for a difficult meal.

For the waiter was carrying a jug of water with a slice of lemon in, which Ben is allergic to. Food Allergies: How to Safely Navigate Outings - 700 Children's. Holiday celebrations with friends and family almost always center around food. While these visits are simply good times to many, for families of food allergy sufferers, an invite can mean preparing for a stressful event. People with food allergies experience reactions when they touch or eat a food they are allergic to.

Food allergy reactions occur within minutes, are reproducible with every exposure, and can become very serious, even life-threatening, within a matter of minutes. Common symptoms include itchy hives and swelling, but can progress to include difficulty breathing, difficulty swallowing, vomiting, loss of consciousness, and unfortunately, even death. People with food allergies need to strictly avoid exposure to their allergen and there is no safe amount they can eat – even trace amounts can cause symptoms in some people.

Allergic Reactions to Foods in Preschool-Aged Children in a Prospective Observational Food Allergy Study. What’s Known on This Subject: Infants and children with diagnosed food allergy are at risk for acute, potentially life-threatening symptoms. Limited data are available on the frequency, severity, and circumstances of reactions and caretaker medical response. What This Study Adds: This study describes food allergy reaction frequency, circumstances, and response. Pitfalls that may inform improved anticipatory guidance included lack of vigilance, misreading ingredient labels, allergen cross-contact, nonaccidental allergen feeding, and underutilization of epinephrine for severe reactions.

Because of the uncertainties associated with cleaning to that level, advisory labeling (e.g. may contain x) flourishes. Olmsted County in Minnesota has peanut allergy increase. The 10 Most Common Food Allergies. Consumers > Food Allergies: What You Need to Know. Available in (PDF - 1.01MB) Food allergies: Understanding food labels. Allergy to Strawberries » Beyond Allergy. A red strawberry is allergenic? Researcher develops immunotherapy to control peanut allergies. The Egg-Free Diet Guide. Updated January 30, 2015. Written or reviewed by a board-certified physician. See About.com's Medical Review Board. Why the Rise in Gluten Allergies & Celiac. One of the most common statements I hear from new patients goes something like this: “I don’t feel good, but my doctor says there’s nothing wrong with me.” Generally, in these cases, a patient tells their doctor that he or she just isn’t feeling well.

UCLA Food and Drug Allergy Care Center. Hazard Characterisation in Food Allergen Risk Assessment: The Application of Statistical Approaches and the Use of Clinical Data. Why are food allergies on the rise? The Rise Of Gluten Intolerance. Peanut Allergies May Have Tripled Over The Last Decade. Allergy Statistics - Allergy UK. Facts and Statistics - Food Allergy Research & Education.

High prevalence of peanut allergy in US school-age children. Statistics by Country for Peanut allergies.