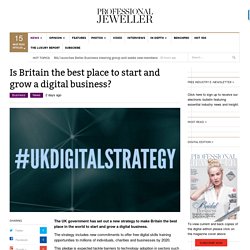 The strategy includes new commitments to offer free digital skills training opportunities to millions of individuals, charities and businesses by 2020. This pledge is expected tackle barriers to technology adoption in sectors such as retail. Story continues below. PayPal reveals online exports boom driven by British SMEs. New transaction data from PayPal reveals how small and medium-sized businesses benefitted most from the record lows of the pound last year. 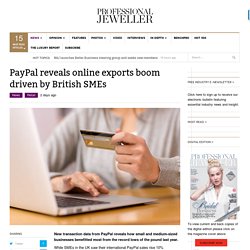 While SMEs in the UK saw their international PayPal sales rise 10% year-on-year from January to June 2016, the rate of growth trebled to 34% year-on-year from July to December. For British businesses as a whole, there was an uplift in PayPal sales to online shoppers visiting from overseas, but the biggest impact was seen on small and medium-sized businesses. Story continues below Advertisement The amount international shoppers spent with UK SMEs rose 13% per transaction in the last six months of 2016. FEATURE: Shine bright like a diamond.

In 2015, SAND Diamonds enjoyed its first year of profit in the UK, with the momentum to be able to continue and see growth year on year. 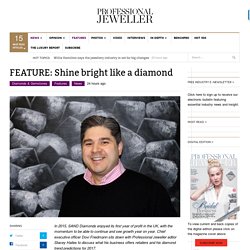 Chief executive officer Dovi Friedmann sits down with Professional Jeweller editor Stacey Hailes to discuss what his business offers retailers and his diamond trend predictions for 2017. It was love that first brought SAND Diamonds chief executive officer Dovi Friedmann into the diamond industry almost fifteen years ago. With no previous background or knowledge, Friedmann started working for a small diamond manufacturer in Israel as it was a job that kept him close to his now wife. Little did he know, diamonds would steal his heart too. Story continues below. Willie Hamilton says the jewellery industry is set for big changes. The Company of Master Jewellers chief executive officer says the jewellery industry will change more in the next five years than it has in the last five years. 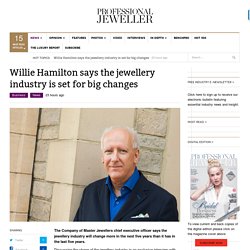 Discussing the shape of the jewellery industry in an exclusive interview with Professional Jeweller, Willie Hamilton said although retail is coming back to the high street, buying a piece of jewellery is not like it was 15 years ago. He commented: “You go in now and you can buy something in Accessorize, and you can buy something in Graff and wear it. So the market is so wide, and it’s making sure that the jewellers own that and they do, they’ve just got to hold on to it.” 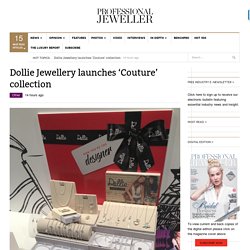 Dollie Jewellery, which is distributed by the CMJ, has introduced new products which allows the consumer to become the designer. Dollie Jewellery’s original collection of jewellery features silver bracelets, with charms already included in the piece. With Dollie Couture, consumers can chose and add charms to a new bracelet which has been made with a silver stretching mechanism, rather than elastic. Willie Hamilton highlights key jewellery trends for 2017.

Company of Master Jewellers chief executive officer, Willie Hamilton, has highlighted key jewellery trends for retailers to watch out for this year. 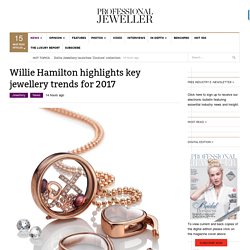 Talking at the retailer’s meeting at the buying group’s bi-annual trade event, Hamilton pinpointed trends within the jewellery industry which the CMJ believes will be important over the next 12 months. The most important trend he discussed was ‘bridge jewellery’ – jewellery which is neither costume nor fine. He said this sector of the market is growing significantly and will continue to grow right the way through to 2020. Sales of male name necklaces soar thanks to celebrity trend. Online jewellery retailer Jewlr has seen an increase in male name necklace orders as celebrities have been increasingly spotted endorsing the trend. 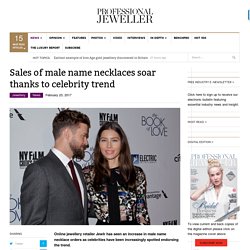 Jewlr says male names now account for 50% of the retailer’s name necklace orders. Furthermore, the company has seen a 2000% year on year increase of name necklace sales, with their solid sterling silver, gold and rose gold name necklaces now accounting for 20% of total site sales. The NAJ relocates London office. The National Associations of Jewellers has relocated its London office to Britton Street. 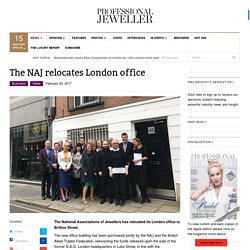 The new office building has been purchased jointly by the NAJ and the British Allied Trades Federation, reinvesting the funds released upon the sale of the former N.A.G. London headquarters in Luke Street, in line with the reassurances given to N.A.G. members at the time of the vote to unify the N.A.G. with the BJA. Commenting on the new home, NAJ chief executive officer, Michael Rawlinson, said “I am delighted that we have a new London base just a stone’s throw away from the heart of the London jewellery industry in Hatton Garden and just two doors away from the Goldsmiths’ Centre.

I am sure that the trade will both feel and see the benefits of us being better located. Having completed the move just last Friday, I am delighted to welcome members of the National Committee to both see our new home and talk to the staff today.” Sima Vaziry Jewellery opens first boutique. Sima Vaziry Jewellery and hat designer Katherine Elizabeth Millinery have partnered together to open a boutique studio and shop in London. 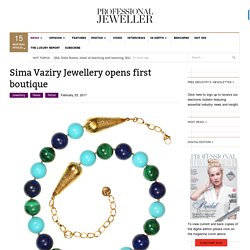 This move marks Sima Vaziry Jewellery’s first store and the designer has chosen the OXO Tower Wharf on London’s South Bank for this retail debut. The designer hopes to capture the consumers in one of London’s busy and commercial districts when she opens the doors for the very first time on Friday Feb 24). Story continues below Advertisement. Brands and retailers need to work together to drive footfall into stores. Jewellery brands and retailers both have an important role to play when it comes to driving footfall into stores. 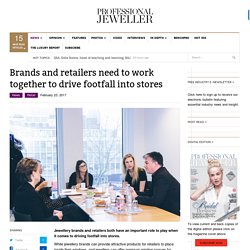 While jewellery brands can provide attractive products for retailers to place inside their windows, and jewellers can offer premium window spaces for jewels to be showcased in on the high street, brands and retailers need to work much more closely together to draw people inside. Speaking at an exclusive roundtable debate hosted by Professional Jeweller in London, senior UK jewellery executives discussed why brands and retailers can join forces for the success of the industry. Story continues below. Lucinda King scoops new stockists at Jewellery & Watch. Recently launched fashion jewellery brand Lucinda King has reported a successful first Jewellery & Watch show. The brand, which was founded late last year by Samantha Owen, secured new stockists at the Birmingham-based trade show and took numerous re-orders from existing ones.

“There was mixed views about the success of the show for everyone, but as first shows go, things couldn’t have been more positive,” Lucinda King founder Samantha Owen shares. Chisholm Hunter adds sparkle to SBH Scotland Burns event. Luxury jewellery retailer Chisholm Hunter helped to raise money for Spina Bifida Hydrocephalus Scotland (SBH Scotland) at the charity’s annual ‘A Question of Burns’ supper. Chisholm Hunter sponsored the prestigious event for the ninth consecutive year, after managing director Harry Brown attended as a guest back in 2008 and immediately decided to get involved.

As the Presenting Sponsor, Chisholm Hunter also donated two sets of 18ct white gold and diamond earrings worth £1500 each for the grand prize draw as well as 10 designer watches for the quiz prizes. Story continues below Advertisement 400 generous guests joined Chisholm Hunter and SBH Scotland for its traditional black tie Burns Supper fundraiser at the Glasgow’s Hilton Hotel. LM Jewellery searches for regional sales managers. Diamond wholesaler, LM Jewellery, is looking for area sales professionals to represent the company around the UK.

LM Jewellery is a third generation family-run diamond wholesaler, offering an enviable array of diamond set jewellery. With a new catalogue produced and stock ready to roll out – theopportunity exists herein to step up and drive the brands distribution network forward. EXCLUSIVE: Strange the Jewellers relocates to prime location. Independent jewellery retailer Strange the Jewellers has opened its doors to a new and larger store in Wokingham. The Hot 100 retail stars closed its Rose Street boutique and moved to a better location on the high street. Strange the Jewellers can now be found on Bush Walk, Market Place, in a space which is three times the size of the independent jeweller’s previous store. Bespoke jewellery continues strong growth as UK manufacturers invest in 3D printers. 2016 saw continued growth for bespoke jewellery throughout the UK and Ireland as GVUK Design, Gemvision and EnvisionTEC distributor reports 30% growth for the year.

The three-month blip immediately after Brexit aside, GVUK Design saw a month on month increase in sales of Gemvision’s Matrix and CounterSketch plus strong sales of EnvisionTEC’s latest Micro Plus 3D printer. Graham Dicks, GVUK Design director comments on how noticeable new business was for the year with the likes of Hatton Garden based start-up CADsmith Creations and former Holts Academy student and Goldsmiths’ Council award winner Danny Ries accelerating their business potential with Matrix, while established goldsmith MX Jewellery Designs from Dublin expanded their trade with the latest EnvisionTEC Micro 3D printer. Story continues below Advertisement.