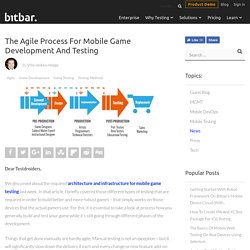 In that article, I briefly covered those different types of testing that are required in order to build better and more robust games – that simply works on those devices that the actual gamers use. For this, it is essential to take a look at process how you generally build and test your game while it’s still going through different phases of the development. Things that get done manually are hardly agile.

Manual testing is not an exception – but it will significantly slow down the delivery if each and every change or new feature add-on have to be manually tested. They do Agile – developers concentrating on delivery of new features, enhancements, bug fixes. The common approach, even today, with mobile game testing is that all of that important QA and testing work gets done at very late of the development process. Smoke testing with automatic test exerciser. Happy Testing! Game Development Process – GenITeam – Game Developers Blog. 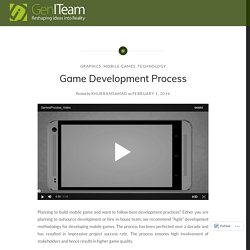 Either you are planning to outsource development or hire in-house team; we recommend “Agile” development methodology for developing mobile games. The process has been perfected over a decade and has resulted in impressive project success rate. The process ensures high involvement of stakeholders and hence results in higher game quality.

The process is divided into following stages, Pre-Production, Production and Post Production. Pre-Production: During this stage, client approaches game developer with an idea that he wishes to develop. Idea: -The process starts with a game idea. Note: Though game mechanics can’t be patented but we sill recommend clients to sign NDA with game developers before engaging into discussions. Idea Refinement: -Usually termed as building storyline, it involves defining main character, plot setting and overall game theme. Production: – Post Production: – Like this: Like Loading... Video Game Development Process. The development of video game is a long and tedious one, and this is an industry that is ruled by a few heavyweights. 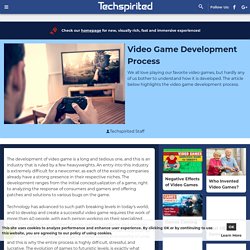 An entry into this industry is extremely difficult for a newcomer, as each of the existing companies already have a strong presence in their respective niches. The development ranges from the initial conceptualization of a game, right to analyzing the response of consumers and gamers and offering patches and solutions to various bugs on the game. Technology has advanced to such path breaking levels in today's world, and to develop and create a successful video game requires the work of more than 40 people, with each person working on their specialized task.

There are a large number of video gaming platforms and consoles today, and as such the expectations of the consumers has really shot up high. Each and every detail of a game needs weeks and months of work, and this is why the entire process is highly difficult, stressful, and lucrative. The Process of Game Creation & the Game Design Document. If you’ve been following the Game Maker activities, or if you had a look at the Skillset Industry Standards, you’ll probably have realised by now that developing a ‘major’ game title can be a significant task – writers, game designers, sound designers, visual artists and more must work together to create the actual game. So what sort of team – and what sort of development process – is involved in developing a game? To get you in the mood, read section 1 of the Gamasutra article A Primer for the Design Process, Part 1: Do.

What questions do game designers need to ask before they start to work on the design of a game? Which key team members need appointing right at the start of the game design and development process? Now, let’s consider the case of an educational game, where as well as the game development team, we require input from educational specialists. [Game Development Process – What do you think the testing phase is designed to uncover?