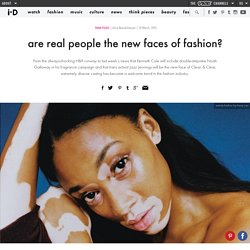 "I did an editorial maybe five years ago for a big house and I shot all black boys and the house banned me from shooting their clothes for the whole season. " But, says Amato, things are changing. "Now I look and I see diversity. It's what everybody is doing. It's quite brilliant. " Performance artist Boychild at Hood by Air. "Diversity is becoming more of a given now," agrees casting director Preston Chaunsumlit. Last summer, the chain's New York store used "real size mannequins" for its window display. Yes to this. And yes also to last week's announcement that Noah Galloway, an Iraq War veteran and double amputee, will be the new face of Kenneth Cole's new men's fragrance. This particular casting decision also raises important questions about the way in which brands use casting within their marketing campaigns.

Fashion Campaign Models, Prada Models, Dior Models, Lexi Boling, Julia Nobis. Cara delevingne speaks out about sexual harassment in fashion. @caradelevingne Like Kate Moss and a million other models before her, Cara Delevingne has spoken about about the worrying number of creeps in the fashion industry. 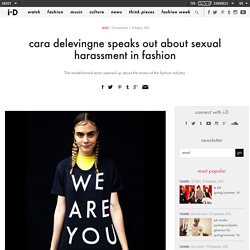 "I am a bit of a feminist and it makes me feel sick," Delevingne told the Sunday Times. "It's horrible and it's disgusting. [We're talking about] young girls. You start when you are really young and you do... you get subjected to… not great stuff," she explained. What's sad is that this is barely a revelation: so many models have spoken out about the inappropriate ways that they have been treated by photographers, and the things they are expected to do as standard, such as posing topless as a teenager. Cara also revealed that the strains of working in the fashion industry gave her stress-related psoriasis, describing how make-up would be used to cover it for catwalk shows.

The 25 most powerful people in fashion. Outrage As 14-Year-Old Dior Model Sofia Mechetner Wears Sheer Dress On The Catwalk. Young models are nothing new in the world of fashion. 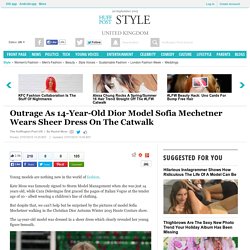 Kate Moss was famously signed to Storm Model Management when she was just 14 years old, while Cara Delevingne first graced the pages of Italian Vogue at the tender age of 10 - albeit wearing a children's line of clothing. But despite that, we can't help but be surprised by the pictures of model Sofia Mechetner walking in the Christian Dior Autumn Winter 2015 Haute Couture show. The 14-year-old model was dressed in a sheer dress which clearly revealed her young figure beneath. We have blurred the appearance of Sofia Mechetner's nipples in the image above, as she is under the age of 16 Mechetner has reportedly signed a two-year contract, worth £170,000, to front Dior's catwalk shows and advertising.

Fashion Photographer Redefines Beauty With Stunning Photos Of People With Visible Genetic Conditions. It's safe to say that the fashion industry takes a one-size-fits-all approach to beauty and diversity. 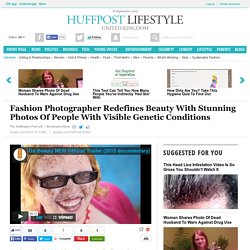 For fashion photographer Rick Guidotti, having to work within such restrictive beauty parameters was no longer an option. He decided to focus on a subject that he was far more passionate about - redefining beauty. In particular, photographing people with visible genetic conditions who have long been left in the shadows. Guidotti believes that men and women with visible conditions are just as beautiful as any supermodel. And these photographs prove just that. Sarah Kanney has Sturge-Weber syndrome The photographer has worked on a new documentary called On Beauty, in collaboration with Kartemquin films, which focuses on challenging beauty norms. Wear Your Clothes Inside Out: The Fashion Statement That Shows You Care On Fashion Revolution Day. Social media has been swamped with images of people wearing their clothes inside out - and no they didn't all get dressed in the dark this morning. 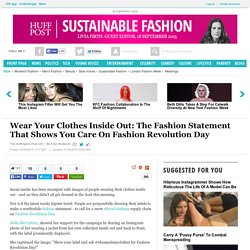 Nor is it the latest wacky hipster trend. People are purposefully showing their labels to make a worthwhile fashion statement - to call for a more ethical clothing supply chain on Fashion Revolution Day. Stella McCartney, showed her support for the campaign by sharing an Instagram photo of her wearing a jacket from her own collection inside out and back to front, with the label prominently displayed. She captioned the image: "Show your label and ask #whomademyclothes for Fashion Revolution Day! " Model Lily Cole, showed her support in a different way by sharing a photo of herself holding the campaign's logo: Fashion Revolution Day marks the date two years ago when a garment factory collapsed in Bangladesh, killing more than 1,100 people and injuring another 2,500.

The Best of BoF 2013. Fri, 19 April 2013. "Wearables For Good" Challenges Designers To Help Communities in Need. Wearable technology can help you get more exercise, track your sleep, alert you to new text messages, but frankly those are all first world problems. 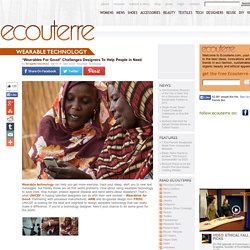 How about using wearable technology to save lives, stop hunger, protect against disease and send alerts about disasters? That’s what UNICEF is hoping talented designers can do with their new contest – Wearables for Good. Partnering with processor manufacturer, ARM and do-gooder design firm FROG, UNICEF is looking for the best and brightest to design wearable technology that can really make a difference.

If you’re a technology designer, here’s your chance to do some good for the world. The Wearables for Good competition is challenging designers of all ages and backgrounds to think about how technology can be used for good. RELATED | U.S. UNICEF is looking for ideas that are cost-effective, rugged and durable, use little power, and are scalable.