Naomi Campbell and Jourdan Dunn Star in Burberry's Spring Campaign. When Burberry released the ad campaign for its "My Burberry" fragrance back in September, the brand brought together two of the UK's most iconic models, Kate Moss and Cara Delevingne, for their first-ever photo shoot. 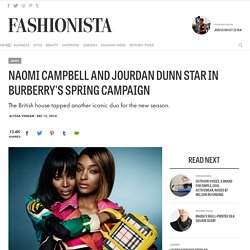 Just when we thought that the British brand couldn't top its union of multi-generational supermodels, it released its campaign for Spring 2015, which stars 44-year-old Naomi Campbell and 24-year-old Jourdan Dunn side by side, shot by Mario Testino in London. Much like Moss and Delevingne's campaign, the two models seem like the best of friends, and are depicted in a series of warm embraces while wearing colorful pieces from Burberry's spring collection (check out that ombré dress and suede coat). "Naomi and Jourdan – two great British icons, two strong, beautiful women and the two perfect faces for our new campaign," said Christopher Bailey, Burberry's chief creative and chief executive officer, in a release about their casting. 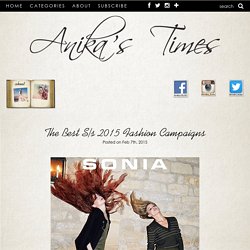 Alexander Wang s/s 2015 proves that Wang can make even a party bus very cool. “There have been so many times when people leave a club and they have to split up and find taxis or get stuck in traffic,” says Wang. “They sober up. Kate Moss and Cara Delevingne's Burberry Campaign Has Landed. Malaika Firth for Burberry 2014 Ad Campaign – BellaNaija – December 2013001.

Burberry shares suffer worst fall in three years on poor sales growth. "While mindful of this external volatility, our plans for the festive season position us well to return to a more positive sales trend in the all-important second half. 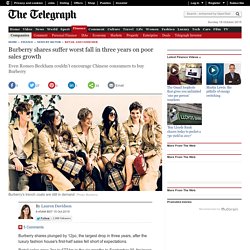 " Mr Bailey – who received £7.9m last year including a £1.8m bonus, making him one of the best paid bosses in the FTSE 100 – will see his renumeration cut as the company reduces payouts by £30m following the sales slump. Like other luxury brands, Burberry – which relies on Chinese consumers for roughly a third of its revenues – has struggled in the face of a Chinese clampdown on extravagant spending and gifting, with wealthy consumers from the region travelling to Europe to shop there instead.

Jeremy Cook, chief economist at World First, said: “If the devaluation of the yuan and the weakness of Chinese and emerging market economies were the first shoe to drop, then the slowing of demand and sales for luxury retailers like Burberry is surely the next. LOGOSbuberry.jpg Photo by rocketrend. My-burberry-fragrance-ad-campaign-kate-cara - Fashion Market. Burberry Men Spring/Summer 2015 Campaign. British fashion house Burberry releases a first look at its upcoming spring-summer 2015 campaign. 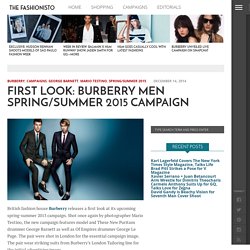 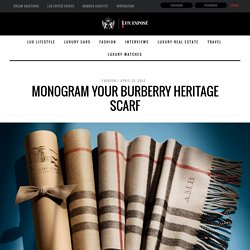 The English icon brand’s cashmere scarves in camel, stone, military red and charcoal, as well as the iconic Burberry check, can also be personalized with up to three characters. Burberry Prorsum SS14 Campaign Artists & Roses - Fashion Addicted Foodies. In addition to the fact that I just love Burberry, I am a huge fan of Christopher Bailey, the Chief Creating Officer, which in layman’s terms translates to him being the chief designer. 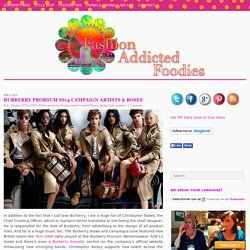 He is responsible for the look of Burberry, from advertising to the design of all product lines. And he is a huge music fan. Burberry Prorsum S/S 2015 Campaign. Pinterest. Pinterest. Pinterest. Designer Collection from Fashion and Style. Teen Vogue on Tumblr. Women’s Cashmere Coats. Celebrity SCENTsation, celebrity perfumes, fragrances by celebrities. Burberry's Personalised Scarf: The Must Have Accessory Of 2015. Burberry SS15 Accessories Campaign. CHRISTOPHER BAILEY INTRODUCES 121 REGENT STREET, BURBERRY WORLD LIVE! Burberry Regent Street Flagship Review. Here is a guest article by Oliver Legris about the new Burberry Flagship. 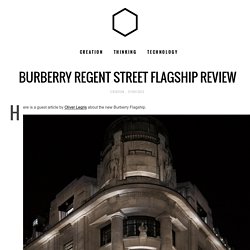 This week, Burberry started their PR campaign to introduce to the world their new world flagship, a 44000 sq ft shop on Regent Street London. The angle for this campaign was a shop designed to resemble its website. This catchy headline was enough for everyone to tweet about it, being impress without really knowing what it means. As a Londoner and a planner in a digital agency obsessed with retail places, I had to go there to understand if this was PR bullshit or a groundbreaking changing innovation. 1. Burberry has a simple mission: Stay a relevant luxury brand that sells high margin trench coat because they are the “trench coat reference” but also be able to diversify itself to have the legitimacy to sell other high margin product. 1.2 The context 1.3 The actual strategy Burberry has 3 main pillars to achieve their objective 1.3.1 A global vision via the Chief Creative Officer 1.3.3 Becoming the best in class in digital. 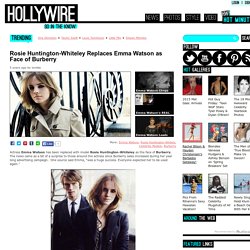 The news came as a bit of a surprise to those around the actress since Burberry sales increased during her year long advertising campaign. One source said Emma, "was a huge success. Everyone expected her to be used again. " Rosie, who modeled for Victoria's Secret in the past, is well known in the modeling industry and will most likely have a positive impact on the designer brand. Uk.pinterest. Uk.pinterest. 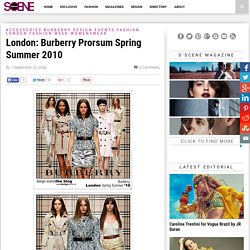 The show took place in a venue specially built by Burberry, from the amazing venue to a detailed collection all of the anticipations were met. Bailey literary gave a new twist to the statement shoulder trend, scrunched skirts, genially constructed materials, new domination of the trench, made fashion history happen before our eyes. For sure the collection will dominate editorial pages for seasons to come. Runway video with an open comment box is available at live.burberry.com Continue reading for a more detailed description of the Spring Summer collection, and view images of all forty and two looks sent down the runway: Runway images below: Shoesgloriousshoes. With the long anticipated release of ‘Alice In Wonderland’ creating a merchandising frenzy -perhaps the biggest since the High School Musical uber annoying franchise- here’s my pick of the best to get your own Wonderland look. 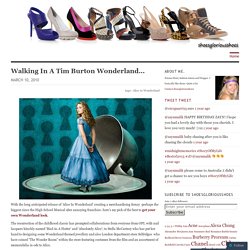 The resurrection of the childhood classic has prompted collaborations from everyone from OPI; with nail lacquers kitschly named ‘Mad As A Hatter’ and ‘Absolutely Alice’; to Stella McCartney who has put her hand to designing some Wonderland themed jewellery and also London department store Selfridges who have coined “The Wonder Room” within the store featuring costumes from the film and an assortment of memorabilia in ode to Alice. Tim Burton’s signature kooky take on the childhood classic by Lewis Carroll, sees Alice all grown up and back in Wonderland. Alice is played by little known Australian actress Mia Wasikowska, alongside Burton regulars Helena Bonham Carter as The Red Queen, and Johnny Depp as The Mad Hatter.