Paytm to launch payments bank on May 23 but with a different CEO. However, in a crucial change, former Reserve Bank of India (RBI) executive and PwC consultant Shinjini Kumar who was chosen for the role of the payments bank chief executive officer (CEO), has stepped down and is in exit mode, while Renu Satti vice-president, business will take over. 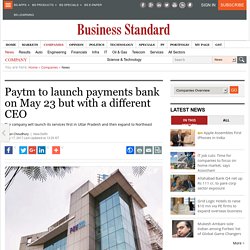 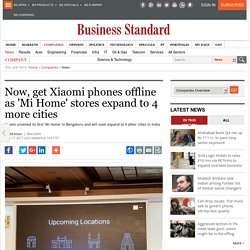 Thanks to its fan base, data by IDC shows that Xiaomi now has a 14.3 percent market share in the Indian smartphone space and the Redmi Note 4 has even beaten Samsung’s Galaxy J2 as the top shipped smartphone in India. "Xiaomi’s efforts for operating the Mi.com and frequent short supply of its devices with eTailers were the key reasons for the shift of Indian consumers buying from vendor’s website," noted IDC. Nokia 3310, iconic handset of the 2000s, makes a comeback. The iconic phone that made waves in the 2000s has made a comeback.

Nokia 3310 will be available in stores across the country from May 18. Interestingly, the price of the phone is in sync with the model number -- it costs Rs 3,310. Sold exclusively offline, this nostalgic model of the 2000s is something you might just want to possess. Here's a list of 10 interesting facts about a feature phone at the times of heavy smartphones: IBM says firing report factually incorrect, govt too allays layoff fears. Tech giant IBM on Wednesday clarified that the company is not firing 5,000 employees and the media reports regarding the same were factually incorrect. 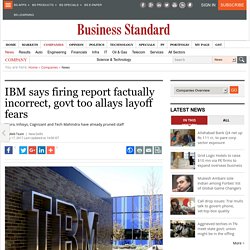 Business Standard on Tuesday had said the the company was laying off 5,000 employees in India, joining the league of Cognizant, Infosys and Wipro in pruning staff as the IT sector faces technology shifts towards automation, and from manning legacy system to digital and cloud.. IBM also said that it was continuing to re-skill and rebalance its employee workforce. “This is factually incorrect. CBI raids on Karti Chidambaram: Plot decoded and some unanswered questions. 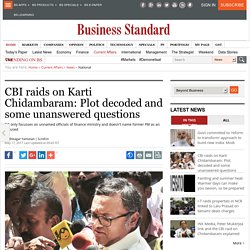 The raids are related to foreign investment clearances approved by the Centre’s Foreign Investment Promotion Board to media firms in 2007 during the United Progressive Alliance rule. The First Information Report, which facilitated the raids, was filed in Delhi on Monday. The firms under scanner, INX Media Private Limited and INX News Private Limited, had Indrani Mukherjea and Peter Mukherjea as former directors. The two are currently in prison on charges of killing their daughter Sheena Bora in April 2012. Paytm to launch payments bank on May 23, transfer wallet biz to new company. After months of delay, Paytm is now all set to commence its payments bank operations from May 23, having received the final approval from the Reserve Bank of India (RBI). 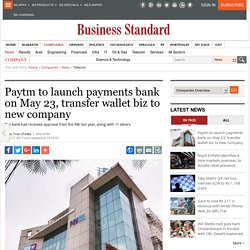 "...Paytm Payments Bank Ltd (PPBL) has received the final licence from the RBI and would commence its operations on May 23, 2017," it said in a public notice. The company will transfer its wallet business, which has over 218 million mobile wallet users, to the newly incorporated entity -- PPBL -- under the payments bank licence awarded to a resident Indian, Vijay Shekhar Sharma, the founder of One97 Communications that owns Paytm. After May 23, the Paytm wallet will move to PPBL. Xiaomi Redmi 4 takeaways: A fine balance of software, hardware and design. China-based smartphone manufacturer Xiaomi on Tuesday updated its entry-level Redmi series with the launch of the Redmi 4 smartphone in India. 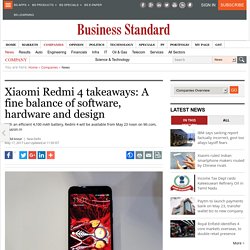 Successor to the already famous Redmi 3S, the latest smartphone carries the legacy forward by offering a very efficient 4100mAh battery in a compact design form. Business Standard. Business Standard. OnePlus 5 launch soon: Device to have flagship features for half the price. OnePlus 5, the next flagship device from the stable of China-based smartphone manufacturer OnePlus, is making a lot of buzz over the internet. 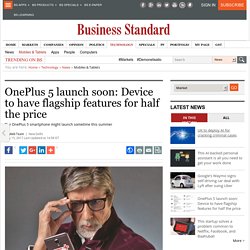 The smartphone, expected to launch in a couple of months, is making the tech community keep an eagle eye on every small information available. While big names such as Samsung and LG have already announced their flagship smartphones, the keen wait for the OnePlus 5 is understood, given that OnePlus devices are known to throw in top-tier specifications at half the price of other flagship devices. Recently, OnePlus CEO Pete Lau posted a picture on Weibo confirming the development of OnePlus 5.

Soon, the smartphone features, specifications, camera samples and even the price of the smartphone surfaced online. And, as days passed, the OnePlus 5 specification sheet was leaked by an online technology-based portal Slashleaks. HTC U11: A human touch-inspired smartphone that is perfectly 'squeezable' Taiwan-based consumer electronics company HTC on Tuesday announced its ‘U11’ flagship smartphone in Taipei. 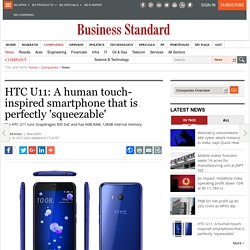 The HTC U11 smartphone features top-tier specifications and seems a flagship smartphone in true sense of the word that can compete with the likes of the Samsung Galaxy S8, LG G6 and Apple iPhone 7 smartphones. The HTC U11 can be operated using squeeze-based interactions, a first for any smartphone. In keeping with the human touch, which inspires the phone's squeeze-based interactions, the device has been named “U”11 -- implying a focus on you, rather than it. Here are the detailed features of HTC U11 smartphone:

OnePlus 5 launch soon: Device to have flagship features for half the price. Ransomware attack: Indian-origin Google researcher hints North Korea link. As the world struggles to identify cybercriminals behind the global ransowmware attack that hit 150 countries, an Indian-origin security researcher working with Google has claimed that the hackers may have links to North Korea. 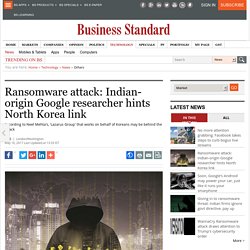 According to Neel Mehta's discovery, the "Lazarus Group" that works on behalf of North Koreans may be behind the attack as the hacking group has, in the past, used the same coding and tools as were used in "WannaCrypt" — the software used in the current hacking into the Microsoft operating software, the BBC reported on Tuesday.

"Neel Mehta's discovery is the most significant clue to date regarding the origins of WannaCrypt," the report quoted Moscow-based cyber security firm Kaspersky Lab as saying. Soon, Google's Android may power your car, just like it runs on smartphone. Google on Monday announced it was now planning to install Android operating system straight into cars. The search engine giant, trying to establish itself in the automobile industry with high-technology, now could get a major fillip from the use of its mobile operating system in high-end cars. Cars like Audi Q8 and Volvo V90 SUVs will have a version of the Android operating system built in along with voice control operators to control functions like cabin temperature and an opening of the sunroof, even if the user doesn't have an Android phone.

The OS will not only host popular applications like Google Maps, Spotify and NPR but also control car features like seat positioning and temperature. Xiaomi launches VoLTE-ready Rs 6,999 Redmi 4 smartphone: Things to know. China-based smartphone manufacturer Xiaomi on Tuesday updated its entry-level Redmi series with the launch of the Redmi 4 smartphone in India.

Successor to the already famous Redmi 3S, the latest smartphone carries the legacy forward by offering a very efficient 4100mAh battery in a compact design form. The smartphone, priced at Rs 6,999, will be available from 12 noon on May 23 on Amazon India, Mi.com and Mi home. Coming to the specifications, the dual-SIM smartphone features a 5-inch HD screen enclosed in a metal body. The screen is covered with a 2.5D curved glass that adds to the overall design language of the smartphone. The device is powered by a Qualcomm Snapdragon 435 processor, which is an octa-core SoC, coupled with an Adreno 505 GPU. Amazon Prime powers one of three orders during the Great India Sale. Nearly 10 months after its launch, Amazon’s Rs 499 Prime loyalty service drove one of every three orders on the platform during its Great Indian Sale that started Thursday and ended on Sunday.

Prime is increasingly becoming a trend of how people shop on Amazon in India, following a global trend that sees customers signing up to the service and spending about twice as much as non-Prime customers. “We saw Prime customers shopping very heavily in the sale, contributing anywhere from 35-37 per cent of the orders coming in. Also, sales tend to drive up this programme and during the first three days of the sale we acquired five times as many customers for Prime than on a normal day,” said Manish Tiwari, vice-president for category management, Amazon India. iPhone 5S for Rs 15,499! Best deals on Day 2 of Flipkart Big 10 Sale. With plenty of discounts and exciting deals, Flipkart opens its day 2 of the 'Big10 Sale', which will go on until May 18.

The secon day of this huge sale will see a significant cut in the price of Apple products like iPhone 5S 16GB, which available at Rs 15,499, iPhone 7 and iWatch along with other electronics like laptops and desktops, TVs, tablets, smartwatches and other gadgets. In addition, Flipkart is also offering 10 per cent instant discount (up to Rs 1,500) with HDFC Bank credit card. The offer is valid on a minimum purchase of Rs 6,499. Besides, there is a 30 per cent cashback, up to Rs 300, on payments done through PhonePe. Don't give in to threats and pay ransom: India advises victims of WannaCry.

Have you been hit by the recent WannaCry ransomware attack? If so, India’s Computer Emergency Response Team (CERT-In) has advised victims of the recent attack, which is ravaging Windows-based computer systems globally by encrypting critical data, to not given into the cyber attackers' threats and pay the ransom. In a webcast on Monday, CERT-In advised individuals and organisations on how to protect themselves from the threat and outlined what they should do if the ransomware has made it onto their system. CERT-In had issued a critical warning against the WannaCry ransomware threat on Saturday.

Kapil Mishra expose on Arvind Kejriwal, AAP: Is there an iota of truth? Kulbhushan Jadhav case: Detail's of Pakistan's new declaration to ICJ. Pakistan’s latest declaration limiting the circumstances under which it will subject itself to the jurisdiction of the International Court of Justice (ICJ) will have no bearing on the Kulbhushan Jadhav consular access matter that India has raised before the world court, say legal experts. Triple talaq case: SC says will look into polygamy, nikah halala in future. The Supreme Court on Monday said it was keeping open for adjudication in the future the issues of polygamy and 'nikah halala' among Muslims as the Centre insisted on deliberations on these aspects as well.

Meet the Indian teen who has developed world's smallest satellite for Nasa. International Court of Justice requests Pakistan govt for relief to Jadhav. The International Court of Justice on Tuesday stayed the execution of Indian national Kulbhushan Jadhav, who has been sentenced to death by a Pakistani military court on charges of "spying". IndiGo to enter regional aviation, fly smaller planes to hinterland. India’s largest airline IndiGo has signed a non-binding term sheet for purchase of 50 ATR-72 aircraft for a foray into regional aviation. Facebook's artificial intelligence tool makes translation nine times faster. Facebook says its researchers have found a new way to use artificial intelligence to translate material on its social network faster and more accurately. This could mean Facebook users eventually seeing everything translated immediately into their preferred language, not just posts but videos, too.

Former Union minister and diplomat Shashi Tharoor on Tuesday rubbished as “misrepresentations and outright lies” the allegations made by Arnab Goswami’s Republic TV to question Tharoor’s actions after his wife Sunanda Pushkar’s death in 2014. The previous night, the newly launched news channel had aired 19 audio tapes in its purported exposé of the Congress parliamentarian’s actions. Now, you can get home delivery of train tickets, pay at your doorstep. All you need to know about Nisa Godrej, the new chairperson of GCPL. Air India to fly to Los Angeles, Stockholm, Nairobi this year: Lohani. Want to hire? Check out these 5 unconventional hacks. Vistara dials British Airways for partnership ahead of overseas launch.