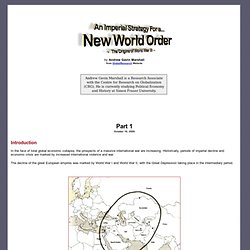 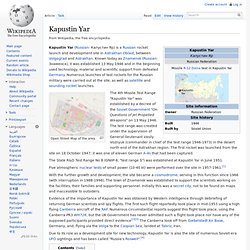 Known today as Znamensk (Russian: Знаменск), it was established 13 May 1946 and in the beginning used technology, material and scientific support from defeated Germany. Numerous launches of test rockets for the Russian military were carried out at the site, as well as satellite and sounding rocket launches. Russian Roswell. The History Channel’s UFO Files continues with its theme of worldwide ‘Roswells’, after bringing us Britain’s Roswell, Mexico’s Roswell and Texas’ Roswell. 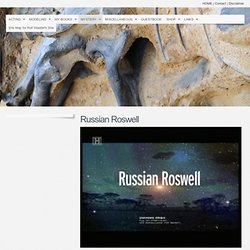 This latest episode tells us all about the Russian Roswell. Kapustin Yar was the former Soviet Union’s most sensitive air base, even exceeding America’s Area 51 for the levels of secrecy that shrouded it. UFO Files claimed that it was to present never-before-seen footage of the base, reconnaissance photos and even a virtual tour of its hidden depths. Kapustin Yar was created as the site for the development of the Soviet Union’s space program after the end of World War II. It lies over 500 miles south of Moscow and about 60 miles east of Volgograd, the former Stalingrad. In 1948, less than a year after the famed Roswell Incident, the base’s radar operators picked up an unidentified object.

Russia has a long history of UFO sightings, dating back thousands of years. One Russian event dwarfs any reported anywhere in the world. What NASA is hiding from the world!!! Real!! UFOINFO. Hidden Human History Movie - All for Consideration Purpose Only! [Recommended by Joe Rogan] UFO Spoted Above London 2012 Olympic Stadium. 9/11 Revisited: Were explosives used? Jesse Ventura (Ex US Seal) examines 9/11. 9/11 Truth: Hollywood Speaks Out (FULL LENGTH FILM) 9/11: The Unofficial Story (2009) NEW PROOF 9/11 WAS AN INSIDE JOB! Richard Gage. Architects and Engineers for 9/11 Truth! (Official Movie) THRIVE: What On Earth Will It Take?

Thrive home web page. WellAware1.com - The Power of 1. The Rumor Mill News Reading Room - Breaking Stories. Privatewealthbuildingassociation. Birth Certificates Traded On NYSE Stock Exchange - How Much Is Your's Worth? Who Owns You?? 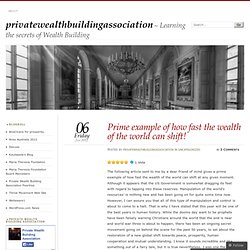 Although it appears that the US Government is somewhat dragging its feet with regard to tapping into these reserves. Manipulation of the world’s resources’ is nothing new and has been going on for quite some time now. However, I can assure you that all of this type of manipulation and control is about to come to a halt. That is why I have stated that this year will be one of the best years in human history. While the dooms day want to be prophets have been falsely warning Christians around the world that the end is near and world war three is about to happen, there has been an ongoing secret movement going on behind the scene for the past 50 years, to set about the restoration of a new global shift towards peace, prosperity, human cooperation and mutual understanding. 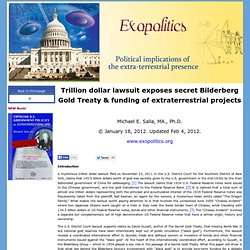 Birth Certificate Bond Slave VS. Prisoner Bond Slave. Prisioners - The Secret Slave Bond Market. How to look it up on the stock market... Legal Info.