Hannah Arendt on Loneliness as the Common Ground for Terror and How Tyrannical Regimes Use Isolation as a Weapon of Oppression. “Loneliness is personal, and it is also political,” Olivia Laing wrote in The Lonely City, one of the finest books of the year. 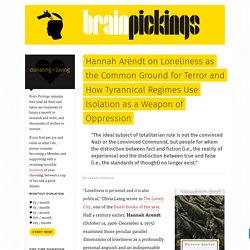 Half a century earlier, Hannah Arendt (October 14, 1906–December 4, 1975) examined those peculiar parallel dimensions of loneliness as a profoundly personal anguish and an indispensable currency of our political life in her intellectual debut, the incisive and astonishingly timely 1951 classic The Origins of Totalitarianism (public library). Arendt paints loneliness as “the common ground for terror” and explores its function as both the chief weapon and the chief damage of oppressive political regimes. Exactly twenty years before her piercing treatise on lying in politics, she writes: Just as terror, even in its pre-total, merely tyrannical form ruins all relationships between men, so the self-compulsion of ideological thinking ruins all relationships with reality. How each generation gets the drugs it deserves. Few people’s views on drugs have changed so starkly as those of Aldous Huxley. 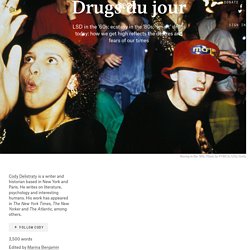 Born in 1894 to a high-society English family, Huxley witnessed the early 20th-century ‘war on drugs’, when two extremely popular narcotics were banned within years of one another: cocaine, which had been sold by the German pharmaceutical company Merck as a treatment for morphine addiction; and heroin, which had been sold for the same purpose by the German pharmaceutical company Bayer. What's Happening in Pakistan's 'Most Complicated' Region? - J. Weston Phippen. A suicide bomber in Pakistan killed 70 people last week, many of them lawyers, who had come to a hospital to mourn the death of a colleague. 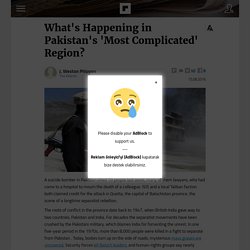 ISIS and a local Taliban faction both claimed credit for the attack in Quetta, the capital of Balochistan province, the scene of a longtime separatist rebellion. The roots of conflict in the province date back to 1947, when British India gave way to two countries, Pakistan and India. ‘The order could come at any moment’: two kamikaze pilots tell their story. The Crisis in European Security - Public lectures and events. <p>Browser does not support script. 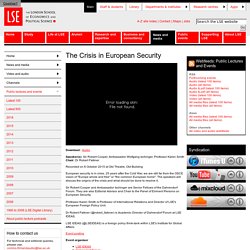 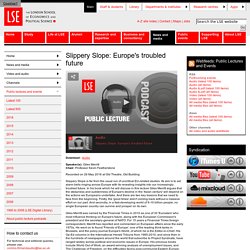 </p> Download : Audio Speaker(s): Giles Merritt Chair: Professor Kevin Featherstone Recorded on 26 May 2016 at Old Theatre, Old Building Slippery Slope is far from the usual run of uncritical EU-related studies. Giles Merritt was named by the Financial Times in 2010 as one of 30 'Eurostars' who most influence thinking on Europe's future, along with the European Commission's president and the secretary-general of NATO.

Kevin Featherstone is Head of the European Institute, Eleftherios Venizelos Professor of Contemporary Greek Studies and Professor of European Politics at LSE. The LSE European Institute (@LSEEI) is celebrating its Twenty Fifth Anniversary in 2016. Event posting Event organiser. They Came in Through the Bathroom Mirror. Ruthie Mae McCoy was terrified. 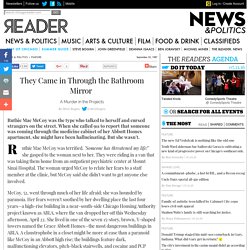 "Someone has threatened my life! " she gasped to the woman next to her. They were riding in a van that was taking them home from an outpatient psychiatric center at Mount Sinai Hospital. The woman urged McCoy to relate her fears to a staff member at the clinic, but McCoy said she didn't want to get anyone else involved. McCoy, 52, went through much of her life afraid; she was hounded by paranoia. At a quarter to nine this April evening, Chicago police got a 911 call from McCoy. "What are they doing, ma'am? " Death and Dishonor. Death and Dishonor (original story in Playboy--reposted at www.playboy.com) Death and Dishonor by Mark Boal www.playboy.com In the May 2004 issue, Playboy published Death and Dishonor by Mark Boal, an article that followed a retired Army Staff Sergeant as he searched for his missing son, an active soldier and veteran of tours in Bosnia and Iraq. 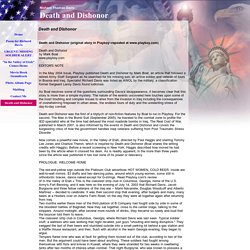 Specialist Richard Davis was listed as AWOL by the military, a classification former Sergeant Lanny Davis found ludicrous. Febraury 2010: William Langewiesche on American Snipers. Outside of Austin, Texas, where the farming begins in earnest, the land turns suddenly to the deepest sort of country, with no hint of the city that stands nearby. 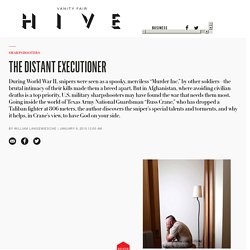 Russ Crane prefers it that way. Crane is not his real name. He wants to remain obscure. He is an experienced military sniper, a serious man in a serious profession that, however, excites a fringe of pretenders and psychopaths. Greatescape(1) I’m With The Banned — Welcome to the Scream Room. The car pulls up outside a dinner being held by Fox News, and two giant, besuited security guards get in on either side of me. 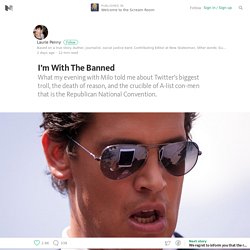 They are the single most massive individuals I have ever met. Then, at last, Milo arrives. He slides into the front seat, all bleach and bling and giant sunglasses—I won’t get to see his eyes all evening. He asks me how I’m feeling. Milo is excited. Social science at the crossroads: the history of political science in the USA and the evolution of social impact. What role should social scientists play in society? 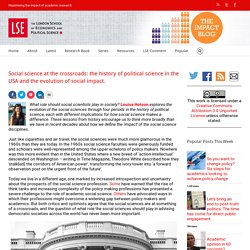 The National Parks: America's Best Idea: Watch Video Check Local Listings The National Parks: America's Best Idea is a six-episode series produced by Ken Burns and Dayton Duncan and written by Dayton Duncan. American exceptionalism, from Stalin with love. Roosevelt and Stalin share a moment at Yalta. Getty Images Every time a public figure uses the term ‘American exceptionalism’, ordinary Americans turn to my website. It’s number one for a quick answer to the question: ‘What is American exceptionalism?’ My latest benefactor was Hillary Clinton, who used the term in a speech on 31 August. My website hits spiked. Nothing Grows Forever. In essence, endless growth puts us on the horns of a seemingly intractable dilemma. Without it, we spiral into poverty. With it, we deplete the planet. Either way, we lose. The Worst Mistake in the History of the Human Race.

So the lives of at least the surviving hunter-gatherers aren't nasty and brutish, even though farmes have pushed them into some of the world's worst real estate. But modern hunter-gatherer societies that have rubbed shoulders with farming societies for thousands of years don't tell us about conditions before the agricultural revolution. Explicit cookie consent. “GLOBALISATION” has become the buzzword of the last two decades. The sudden increase in the exchange of knowledge, trade and capital around the world, driven by technological innovation, from the internet to shipping containers, thrust the term into the limelight. Some see globalisation as a good thing.

The Bonds of Catastrophe. It is perhaps not widely understood (outside the specialized domains of risk modeling and property insurance) that the last twenty years have seen the relatively rapid growth of a new kind of financial instrument: the catastrophe bond. I aim in what follows to offer the reader a brief introduction to these innovative money-things, which sit at the precarious nexus of mathematical modeling, environmental instability, and vast sums of capital.

What caused Haiti’s cholera epidemic? The CDC’s museum knows but won’t say. Last Friday, a friend doing research at the U.S. Neoliberalism – the ideology at the root of all our problems. How Reporters Pulled Off the Panama Papers, the Biggest Leak in Whistleblower History. On the Phenomenon of Bullshit Jobs. Shane Greenstein: "How the Internet Became Commercial" Mexican Democracy’s Lost Years. Photo Mexico City. Richard Lloyd Parry · Ghosts of the Tsunami · LRB 6 February 2014. What every dictator knows: young men are natural fanatics. Young men are particularly liable to become fanatics. Every dictator, every guru, every religious leader, knows this. Chernobyl 30 years on: Photographs from inside the exclusion zone - News. Pyramiden: population 6. The Soviet ghost town frozen in time high in the Arctic. Are book collectors real readers, or just cultural snobs?

It is Saturday, 1 November 2014. I am book-browsing at Barnes and Noble on Fifth Avenue in New York City when my attention is caught by a collection of beautifully produced volumes. Before Indiana Jones came Abraham Hyacinthe Anquetil-Duperron. Is Climate Change Causing Pre-traumatic Stress Disorder in Millennials? The internet as an engine of liberation is an innocent fraud. Why Giordano Bruno is still a free speech hero today. Forget ideology, liberal democracy’s newest threats come from technology and bioscience. The Disadvantages of Being Stupid.