乳袋(チチブクロ)とは. Learning Japanese: A definitive thread. Let's make Japanese learning something simple and fun for everyone. Resources, FAQs and more info in the replies below. Feel free to share and duplicate (with credit)! Learning Japanese should be fun for all on Twit. Pengie's shit. Rebloggin. Jisho.org: Japanese Dictionary. About – Learn Japanese. Disclaimer: This is still a work in progress! 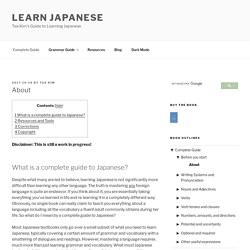 What is a complete guide to Japanese? Despite what many are led to believe, learning Japanese is not significantly more difficult than learning any other language. The truth is mastering any foreign language is quite an endeavor. If you think about it, you are essentially taking everything you’ve learned in life and re-learning it in a completely different way.

Obviously, no single book can really claim to teach you everything about a language including all the vocabulary a fluent adult commonly obtains during her life. Most Japanese textbooks only go over a small subset of what you need to learn Japanese, typically covering a certain amount of grammar and vocabulary with a smattering of dialogues and readings. Another important distinction in the complete guide is that it does not try to hide or avoid more casual but perfectly acceptable aspects of the language. Resources and Tools Corrections. Gakuu - Learn Real Japanese. 日本人の会話の中で「ぱつぱつ/ぱっつんぱっつん」って聞いたことありませんか？？ 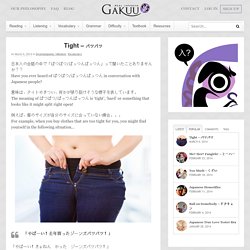 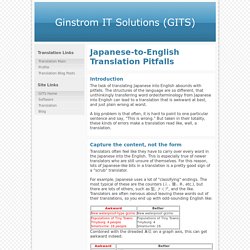 The structures of the language are so different, that unthinkingly transferring word order/terminology from Japanese into English can lead to a translation that is awkward at best, and just plain wrong at worst. A big problem is that often, it is hard to point to one particular sentence and say, "This is wrong. " Multiple Focuses - Manga Scanning + Editing Tutorials. Resources for Translating Manga for Beginners Japanese Talk Online.

Many people want to translate manga but there is not much information on how to start translating manga. 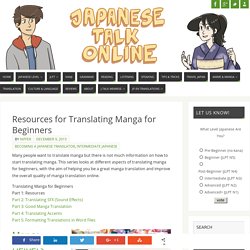 This website is a little difficult to navigate but it has a lot of useful resources for translating manga. It’s also great if you’re a beginner translator because you can add your translations and request for people to proof-read them. The Jade Network (SFX Dictionary) Jisho.org. Japanese abbreviations. RomajiDesu Japanese dictionary. Japanese Slang Dictionary. This dictionary is a comprehensive and in-depth look at all the slang, vulgarisms, curses, and insults, plus idioms and expressions and a lot more, available in Japanese. 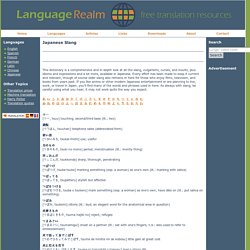 Every effort has been made to keep it current and relevant, though of course older slang also remains in here for those who enjoy films, television, and books from years past. If you like anime or other modern Japanese entertainment or are planning to live, work, or travel in Japan, you'll find many of the words and phrases used in here. As always with slang, be careful using what you hear; it may not work quite the way you expect. ツー [つー, tsuu] touching, second/third base (lit.: two) 通販 [つうはん, tsuuhan] telephone sales (abbreviated form) 使い道 [つかいみち, tsukai-michi] use; useful 月のもの [つきのもの, tsuki no mono] period; menstruation (lit.: montly thing) Product Synonyms, Product Antonyms. Relevance Relevance ranks synonyms and suggests the best matches based on how closely a synonym’s sense matches the sense you selected. 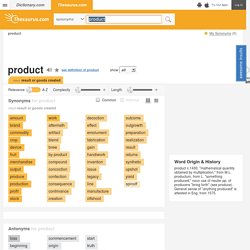 Complexity Complexity sorts synonyms based on their difficulty. Adjust it higher to choose from words that are more complex. Length Length ranks your synonyms based on character count. lists blocks Common words appear frequently in written and spoken language across many genres from radio to academic journals. Informal words should be reserved for casual, colloquial communication. noun result or goods created. Fandom powered by Wikia. "You are all from Yasogami High, eh...? 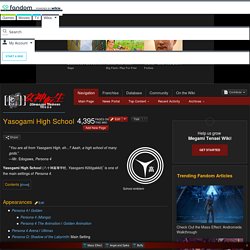 Aaah, a high school of many gods. " —Mr. Edogawa, Persona 4 Yasogami High School (八十神高等学校, Yasogami Kōtōgakkō)? Is one of the main settings of Persona 4. Appearances Edit Profile Persona 4 Edit Persona 4 Arena A replica of the school was recreated for the P-1 Grand Prix. Arena Ultimax Edit. How to clean manga scans. Don't delay me. CamScanner: a must have for traditional artists! - Object Head Appreciation Day.