Substrate materials for the planted aquarium. Introduction There is an appropriate substrate for each type of aquarium. 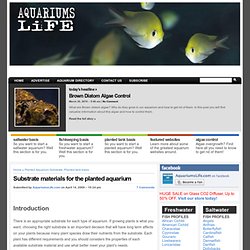 If growing plants is what you want, choosing the right substrate is an important decision that will have long term affects on your plants because many plant species draw their nutrients from the substrate. View air plant terrariums by PinkSerissa. Fuck Yeah Aquascaping. Zilla 09669 Malaysian Driftwood Plant, Medium: Pet Supplies. Design Elements Hollow Log Aquarium Ornament: Pet Supplies. Design Elements Artificial Driftwood Aquarium Ornament: Pet Supplies. Aquatic Plants List A-Z. Welcome to Rex's Guide to Planted Tanks. Guide to Starting a Freshwater Aquarium - Aquarium Advice - Aquarium Forum Community. Guide to Starting a Freshwater Aquarium *The information presented here is based on my own personal experience and research as well as information that may be considered common knowledge among aquarists. 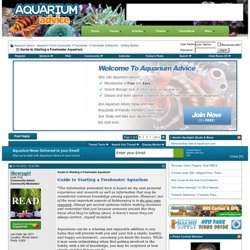 However, one of the most important aspects of fishkeeping is to do your own research . Always get second opinions before making decisions and remember that just because someone sounds like they know what they’re talking about, it doesn’t mean they are always correct…myself included. Aquariums can be a relaxing and enjoyable addition to any home that will provide both you and your fish a stable, healthy and happy environment…assuming you know the basics. While it may seem intimidating when first getting involved in the hobby, with a bit of knowledge, you may be surprised at how simple and fun things can be. 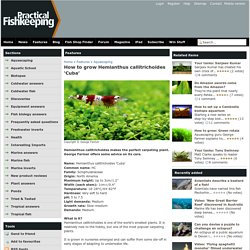 George Farmer offers some advice on its care. Name: Hemianthus callitrichoides ‘Cuba’Common name: HCFamily: ScrophulariaceaeOrigin: North AmericaMaximum height: Up to 3cm/1.2”Width (each stem): 1cm+/0.4”Temperature: 18-28°C/64-82°FHardness: Very soft to hardpH: 5 to 7.5Light demands: MediumGrowth rate: Slow-mediumDemands: Medium What is it? It is grown in nurseries emerged and can suffer from some die-off in early stages of adapting to underwater life. It does best in a nutrient-rich substrate, preferably fine and smooth, so the delicate root structure can penetrate easily. 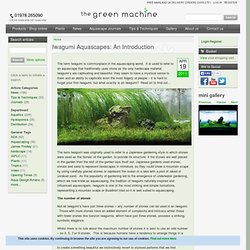 It is used to refer to an aquascape that traditionally uses stone as the only hardscape material. Iwagumi’s are captivating and beautiful: they seem to have a mystical sense to them and an ability to captivate even the most fidgety of people – it is hard to forget your first Iwagumi, but what exactly is an Iwagumi? Read on to find out... The term Iwagumi was originally used to refer to a Japanese gardening style in which stones were used as the ‘bones’ of the garden, to provide its structure: if the stones are well placed in the garden then the rest of the garden lays itself out. Japanese gardens used stones, shrubs and sand to represent landscapes in miniature, so they could show a mountain scape by using carefully placed stones or represent the ocean or a lake with a pool of raked or unraked sand. Guide to Iwagumi Aquaria - Leonardo's Reef. 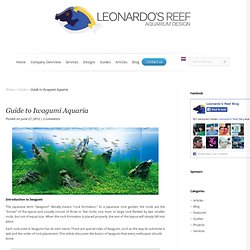 In a Japanese rock garden, the rocks are the “bones” of the layout and usually consist of three or five rocks; one main or large rock flanked by two smaller rocks, but not of equal size. When the rock formation is placed properly, the rest of the layout will simply fall into place. Each rock used in Iwagumi has its own name. There are special rules of Iwagumi, such as the way its substrate is laid and the order of rock placement. If you want to have your own Iwagumi Aquarium, Contact us. In an Iwagumi aquascape you should always use an odd number of rocks of various sizes (three, five etc). When you’re planning out an aquascape, one of the most important aspects is where it will draw the viewer’s gaze. The Golden Ratio The Golden Ratio is described as “two quantities are in golden ratio if the ratio of the sum of the quantities to the larger one equals the ratio of the larger one to the smaller.

Create an Iwagumi Aquascape. Any aquascaper who is a fan of Nature Aquariums must have come across Takashi Amano’s Iwagumi, or ‘stone formation’ style. 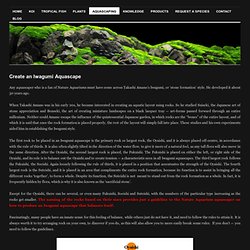 He developed it about 30 years ago. When Takashi Amano was in his early 20s, he became interested in creating an aquatic layout using rocks. So he studied Suiseki, the Japanese art of stone appreciation and Bonseki, the art of creating miniature landscapes on a black lacquer tray — art-forms passed forward through an entire millenium. AquaScaping World Forum. Aquascaping a Planted Aquarium. The simple gathering of plants, beautiful stones and driftwood is no longer the only goal of the modern aquarist. 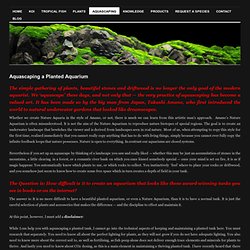 We ‘aquascape’ these days, and not only that — the very practice of aquascaping has become a valued art. It has been made so by the big man from Japan, Takashi Amano, who first introduced the world to natural underwater gardens that looked like dreamscapes. Whether we create Nature Aquaria in the style of Amano, or not, there is much we can learn from this artistic man’s approach. Amano’s Nature Aquarium is often misunderstood. Glossostigma elatinoides.