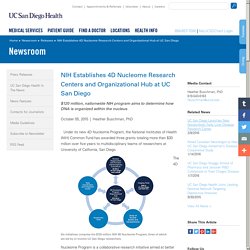 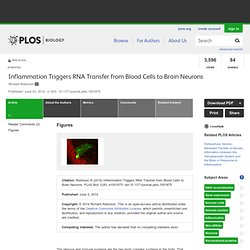 PLoS Biol 12(6): e1001875. doi:10.1371/journal.pbio.1001875 Published: June 3, 2014 Copyright: © 2014 Richard Robinson. This is an open-access article distributed under the terms of the Creative Commons Attribution License, which permits unrestricted use, distribution, and reproduction in any medium, provided the original author and source are credited. Competing interests: The author has declared that no competing interests exist. The nervous and immune systems are the two most complex systems in the body. Inflammation has recently been shown to drive an even more unexpected neuro–immune interaction—fusion of hematopoietic cells with Purkinje neurons of the cerebellum, in which the resulting cell contains both nuclei. To do so, they relied on the Cre recombination system. Human neural stem cells study offers new hope for children with fatal brain diseases. Public release date: 10-Oct-2012 [ Print | E-mail Share ] [ Close Window ] Contact: Tamara Hargens-Bradleyhargenst@ohsu.edu 503-494-8231Oregon Health & Science University PORTLAND, Ore. – Physician-scientists at Oregon Health & Science University Doernbecher Children's Hospital have demonstrated for the first time that banked human neural stem cells — HuCNS-SCs, a proprietary product of StemCells Inc. — can survive and make functional myelin in mice with severe symptoms of myelin loss. 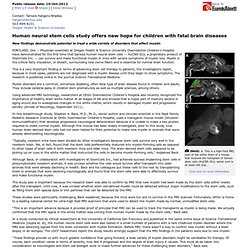 Myelin is the critical fatty insulation, or sheath, surrounding new nerve fibers and is essential for normal brain function. This is a very important finding in terms of advancing stem cell therapy to patients, the investigators report, because in most cases, patients are not diagnosed with a myelin disease until they begin to show symptoms. Myelin disorders are a common, extremely disabling, often fatal type of brain disease found in children and adults. REST and stress resistance in ageing and Alzheimer's disease. Predator Cat Odors Activate Sexual Arousal Pathways in Brains of Toxoplasma gondii Infected Rats. 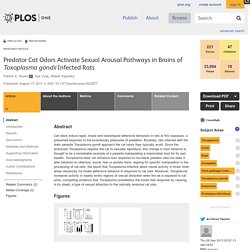 Bizarrely, rats infected with the brain parasite Toxoplasma gondii approach the cat odors they typically avoid. Since the protozoan Toxoplasma requires the cat to sexually reproduce, this change in host behavior is thought to be a remarkable example of a parasite manipulating a mammalian host for its own benefit. Mice Infected with Low-Virulence Strains of Toxoplasma gondii Lose Their Innate Aversion to Cat Urine, Even after Extensive Parasite Clearance. Abstract Toxoplasma gondii chronic infection in rodent secondary hosts has been reported to lead to a loss of innate, hard-wired fear toward cats, its primary host. 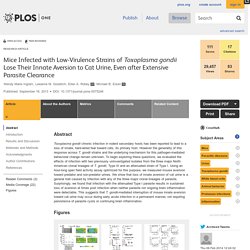 However the generality of this response across T. gondii strains and the underlying mechanism for this pathogen-mediated behavioral change remain unknown. To begin exploring these questions, we evaluated the effects of infection with two previously uninvestigated isolates from the three major North American clonal lineages of T. gondii, Type III and an attenuated strain of Type I.

Using an hour-long open field activity assay optimized for this purpose, we measured mouse aversion toward predator and non-predator urines. We show that loss of innate aversion of cat urine is a general trait caused by infection with any of the three major clonal lineages of parasite. Editor: Emma H. Received: April 1, 2013; Accepted: August 13, 2013; Published: September 18, 2013 Copyright: © 2013 Ingram et al. 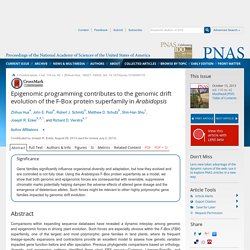 Ecker, August 28, 2013 (sent for review July 2, 2013) Significance Gene families significantly influence organismal diversity and adaptation, but how they evolved and are controlled is not fully clear. Using the Arabidopsis F-Box protein superfamily as a model, we show that both genomic and epigenomic forces are consequential with reversible, suppressive chromatin marks potentially helping dampen the adverse effects of altered gene dosage and the emergence of deleterious alleles.

Abstract. Transgenerational epigenetics in the germline cycle of Caenorhabditis elegans. Introduction The term ‘epigenetics’ was initially used to describe the constellation of developmental phenotypes that could be produced from a single genotype. 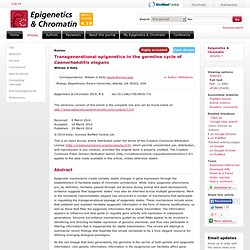 The current definition of epigenetics, which seeks to encompass a very wide variety of biological phenomena, restricts this to the following example: ‘An epigenetic trait is a stably heritable phenotype resulting from changes in a chromosome without alterations in the DNA sequence’ [1]. The use of the term ‘heritable’ in the current definition can encompass mitotic stability, generational stability, or both.

Thus, although stable alterations of gene expression in nondividing cells are often included in examples of epigenetic phenomena, this is stretching the current restrictive definition. Epigenetic heritability is normally less stable than genetic heritability. Figure 1.