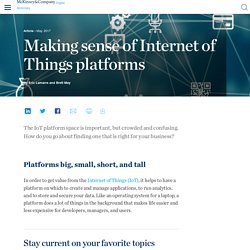 How do you go about finding one that is right for your business? Platforms big, small, short, and tall. Unlocking the potential of the Internet of Things. If policy makers and businesses get it right, linking the physical and digital worlds could generate up to $11.1 trillion a year in economic value by 2025. 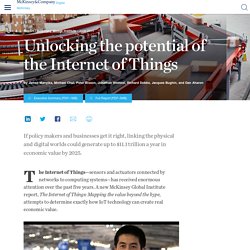 The Internet of Things—sensors and actuators connected by networks to computing systems—has received enormous attention over the past five years. A new McKinsey Global Institute report, The Internet of Things: Mapping the value beyond the hype, attempts to determine exactly how IoT technology can create real economic value. Video MGI partner Michael Chui discusses the economic potential of the Internet of Things. Our central finding is that the hype may actually understate the full potential—but that capturing it will require an understanding of where real value can be created and a successful effort to address a set of systems issues, including interoperability. Achieving this kind of impact would require certain conditions to be in place, notably overcoming the technical, organizational, and regulatory hurdles.

Audio. Winning in IoT: Boston Consulting. Companies will likely spend some €250 billion on IoT, but they need to know which IoT applications have the potential to deliver the most value. 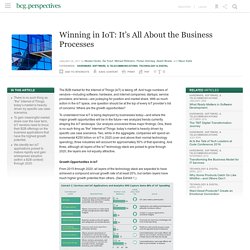 Determining this requires recognizing that business leaders are using IoT to solve discrete business challenges. They’re asking, How can IoT help our company increase customer satisfaction, improve quality, support new business models (such as data-driven services), and reduce costs? A few use cases are driving IoT adoption and growth and will continue to do so through 2020 at least. To gain meaningful market share over the near term, companies need to focus their IoT product offerings on the right use cases. With this in mind, we identified a wide range of use cases for IoT. Predictive Maintenance. Self-Optimizing Production. Winning in IOT BCG. Scope of Industry IOT - PWC. Verozon IOT Report. KPMG IOT Solutions.

The Internet of Things (IoT) has been forecast to deliver up to $11 trillion to the global economy by 2025 and up to $120 billion annually to the Australian economy in the same time frame. 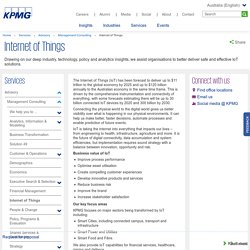 This is driven by the comprehensive instrumentation and connectivity of everything, with some forecasts estimating there will be up to 30 billion connected IoT devices by 2020 and 300 billion by 2030. Connecting the physical world to the digital world gives us better visibility over what is happening in our physical environments. It can help us make better, faster decisions, automate processes and enable prediction of future events. IoT is taking the internet into everything that impacts our lives – from engineering to health, infrastructure, agriculture and more. It is the future of digital connectivity, data accumulation and system efficiencies, but implementation requires sound strategy with a balance between innovation, opportunity and risk. 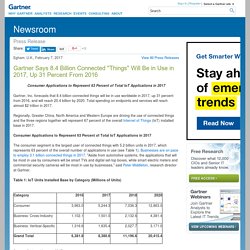 Total spending on endpoints and services will reach almost $2 trillion in 2017. Regionally, Greater China, North America and Western Europe are driving the use of connected things and the three regions together will represent 67 percent of the overall Internet of Things (IoT) installed base in 2017. Internet of Things Spending Forecast to Grow 17.9% in 2016 Led by Manufacturing, Transportation, and Utilities Investments, According to New IDC Spending Guide - prUS42209117. Current State of Internet of Things (IoT) in India - IOT League. The internet of things is now growing exponentially and is reaching different verticals and industries. 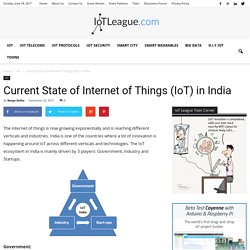 India is one of the countries where a lot of innovation is happening around IoT across different verticals and technologies. The IoT ecosystem in India is mainly driven by 3 players: Government, Industry and Startups. Government: There is a lot of scope for IoT in India and Government has rightly recognised it and working towards it. The government has taken initiative and framed a draft policy to fulfill a vision of developing a connected, secure and a smart system based on our country’s needs. One of the key initiatives of the Government is to build smart cities across the country. Internet of Things (IoT): market potential + trends in 2017 and beyond. THE PEOPLE VS THE SCHOOL SYSTEM. Building a Future-Ready Singapore. Evolution Of The Desk. Add iLab.