If Carpenters Were Hired Like Programmers. Www.oliverlehmann.com/tl_files/oliverlehmann/media/pdfs/free-downloads/Nasa-Hundred-Rules-for-Project-Managers.pdf. Www.nsa.gov/public_info/_files/Untangling_the_Web.pdf. The 50 Best Companies To Work For In 2013. With their hip cultures, innovative projects, and young talent pool, giant tech companies get a lot of hype as dream places to work.

But smaller companies also understand how to attract talent and are stepping up their games with sweet perks, endless room for growth, and appealing mentorship opportunities. Glassdoor.com recently put out its annual Employees’ Choice Award, which measures employee satisfaction and overall experience at the companies. The list, which is solely based on employee reviews and feedback, measures the top companies to work for in 2013. 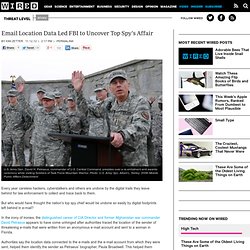 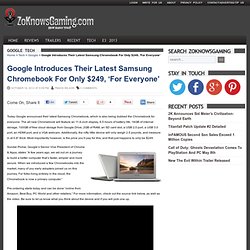 The all new Chromebook will feature an 11.6-inch display, 6.5 hours of battery life, 16GB of internal storage, 100GB of free cloud storage from Google Drive, 2GB of RAM, an SD card slot, a USB 2.0 port, a USB 3.0 port, an HDMI port, and a VGA webcam. Felix Baumgartner freefall from the edge of space w/ New World Record: 128 000 Ft! [ full ] Help Wanted: A Gmail Hack To See Only Replies To My Sent Messages. 4 Signs of a True Entrepreneur. People often wonder how the kid who rarely talked or wasn't particularly popular in class went on to become a start-up genius. 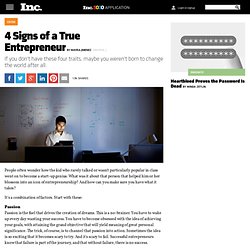 What was it about that person that helped him or her blossom into an icon of entrepreneurship? And how can you make sure you have what it takes? Unpublished Photos of Steve Jobs and Silicon Valley's Early Days Finally Surface. Steve Jobs rallies the troops.

The Bottom is Not Enough. [Translations: Japanese] I wrote a book, Out of Control, heralding the immense power of bottom up systems. 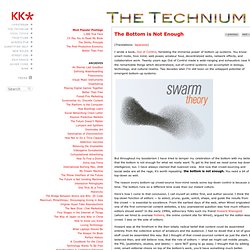 You know: smart mobs, hive mind, web power, amateur hour, decentralized webs, network effects, and collaborative work. Twenty years ago Out of Control made a wide-ranging and exhaustive case for the remarkable things which decentralized, out-of-control systems can accomplish in biology, technology, and cultural realms. Two decades later I’m still keen on the untapped potential of emergent bottom-up systems. But throughout my boosterism I have tried to temper my celebration of the bottom with my belief that the bottom is not enough for what we really want.

How To Be a Genius: This Is Apple's Secret Employee Training Manual. Thomas Edison's To-Do List, 1888. Donating = loving Brain Pickings remains ad-free and takes hundreds of hours a month to research and write, and thousands of dollars to sustain. 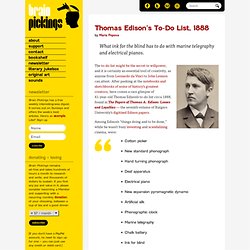 If you find any joy and value in it, please consider becoming a Member and supporting with a recurring monthly donation of your choosing, between a cup of tea and a good dinner: (If you don't have a PayPal account, no need to sign up for one – you can just use any credit or debit card.) You can also become a one-time patron with a single donation in any amount: 6 Small Math Errors That Caused Huge Disasters. If there are any children reading this, there's really only one thing we want to tell you about adulthood: If you make one tiny mistake, people will die. 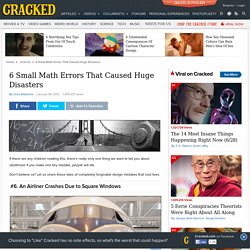 Don't believe us? Let us share these tales of completely forgivable design mistakes that cost lives. #6. An Airliner Crashes Due to Square Windows. Professor Billionaire: The Stanford Academic Who Wrote Google Its First Check. If a Google Employee Dies, Spouse Gets Half of Salary for 10 Years. <br/><a href=" US News</a> | <a href=" Business News</a> Copy It's been long reported that Google treats its employees well, from offering them free food and fitness classes to laundry service and car washes. 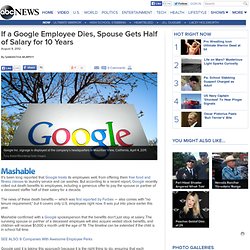 But according to a recent report, Google recently rolled out death benefits to employees, including a generous offer to pay the spouse or partner of a deceased staffer half of their salary for a decade. The news of these death benefits — which was first reported by Forbes — also comes with "no tenure requirement," but it covers only U.S. employees right now. It was put into place earlier this year. Mashable confirmed with a Google spokesperson that the benefits don't just stop at salary. 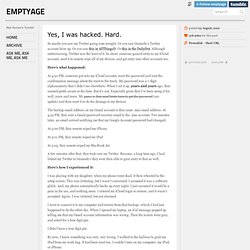 Or you saw Gizmodo’s Twitter account blow up. Or you saw this in AllThingsD. Or this in the DailyDot. Although embarrassing, Twitter was the least of it. Tesla, the inventor. Dear Mark Zuckerberg by Dalton Caldwell. Mark, On June 13, 2012, at 4:30 p.m., I attended a meeting at Facebook HQ in Menlo Park, California. 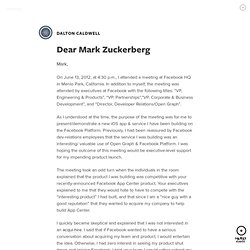 In addition to myself, the meeting was attended by executives at Facebook with the following titles: “VP, Engineering & Products”, “VP, Partnerships”,“VP, Corporate & Business Development”, and “Director, Developer Relations/Open Graph”. As I understood at the time, the purpose of the meeting was for me to present/demonstrate a new iOS app & service I have been building on the Facebook Platform. Previously, I had been reassured by Facebook dev-relations employees that the service I was building was an interesting/ valuable use of Open Graph & Facebook Platform. I was hoping the outcome of this meeting would be executive-level support for my impending product launch. The meeting took an odd turn when the individuals in the room explained that the product I was building was competitive with your recently-announced Facebook App Center product. Hashtags and dollar signs. A quick post about the fascinating move Twitter made with the $.

Not with dollars, but with the actual sign. We all know about hash tags. If I type #dave on Twitter, it hots-it-up -- pointing to a search for the term #dave. Nothing more than that. Now they've done the same thing with the $. Meet the Man Who Put the '@' in Your E-Mail.