Bocci 28.280 at the V&A movie. London Design Festival 2013: Canadian lighting brand Bocci has sent us this movie showing its giant chandelier of colourful glass spheres being installed in the main hall of London's V&A museum. 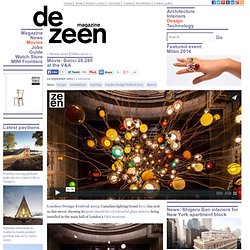 The 28.280 light installation is made of 280 of Bocci's 28 series glass bauble lights, each suspended from a thin copper wire - read more about the design in our previous story. This time-lapse movie shows how the tendrils of the chandelier were unfurled before the top was hoisted up through a hole in the ceiling of the V&A museum's main hall. Also at the museum for this year's London Design Festival, an installation of 5000 paper windmills was set up in a doorway and a still life of a dinner party in progress was arranged in one of the galleries.

See more design by Bocci »See all our coverage of London Design Festival 2013 »See more architecture and design movies » Lightbox.co.in. Products - Synapse. An Archway Constructed Of Bent Light. Oled Moon Chandelier. Moon Chandelier The Moon Chandelier is the first of a series of chandeliers and bespoke commissions that are based on the new chandelier module designed by Dominic Harris and his design company, Cinimod Studio. 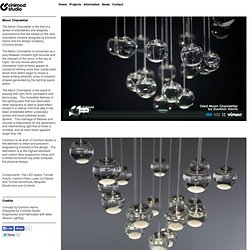 The Moon Chandelier is conceived as a play between invisible light sources and the crescent of the moon in the sky at night. As one moves about the chandelier it will at times appear to consist of nothing more than crystal balls which from within begin to reveal a never-ending beautiful array of crescent shapes generated by the lighting layers within. The Moon Chandelier is the result of playing with light, form, perception and technology. The incredible flatness of the lighting layer that has fascinated other designers is used to great effect, except in a radical inventive step it has been embedded within a precisely turned and hand polished acrylic sphere. 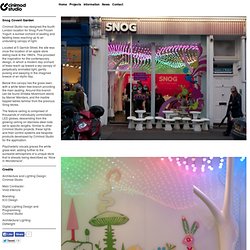 Located at 5 Garrick Street, the site was once the location of an apple store dating back to the 1860′s. This provided the inspiration for the contemporary design, in which a modern day orchard of trees reach up toward a sky canopy of perpetually animated light, gently pulsing and swaying in the imagined breeze of an idyllic day. Below this canopy lies the grass lawn, with a white fallen tree branch providing the main seating. Around this branch can be found Shitake Mushroom stools by Marcel Wanders, and the marble topped tables familiar from the previous Snog stores. The feature ceiling is comprised of thousands of individually controllable LED globes, descending from the glowing ceiling on stainless steel rods set to specific lengths. Credits Architecture and Lighting Design: Cinimod Studio. Soho Snog by Cinimod Studio. London designers Cinimod Studio have completed a lighting installation for SNOG frozen yoghurt shop in Soho, London. 700 glass spheres containing LED lights hang from the ceiling, constantly changing colour. 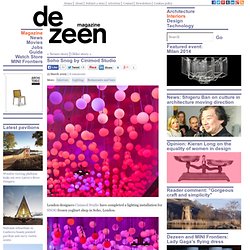 Watch a movie of the installation on the designers' website. Cinimod Studio also designed the interior of the South Kensington Snog store in our previous story. Here's some more information from Cinimod Studio: Cinimod Studio have created the second of their stores for SNOG Pure Frozen Yogurt, this time located in the heart of London’s vibrant Soho. Cinimod’s design builds upon the brand identity created by ico Design and evolves the strong architectural vision created in the first store SNOG South Kensington, while introducing a different ‘quirk’ in the design: the bubbling ceiling. This lighting feature is comprised of 700 glass globes containing LED lights and presents a new level of visual excitement and public engagement.