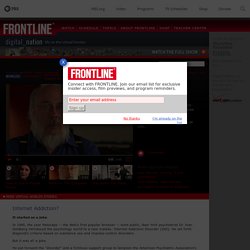 Ivan Goldberg introduced the psychology world to a new malady: Internet Addiction Disorder (IAD). He set forth diagnostic criteria based on substance use and impulse-control disorders. But it was all a joke. He put forward the "disorder" and a fictitious support group to lampoon the American Psychiatric Association's newly released version of the Diagnostic and Statistical Manual of Mental Disorders (DSM). To his surprise, several colleagues confessed their addiction and e-mailed him for help. 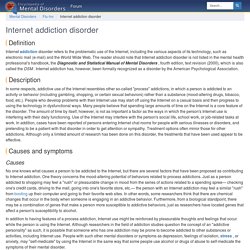 The reader should note that Internet addiction disorder is not listed in the mental health professional's handbook, the Diagnostic and Statistical Manual of Mental Disorders , fourth edition, text revision (2000), which is also called the DSM . Internet addiction has, however, been formally recognized as a disorder by the American Psychological Association. Description In some respects, addictive use of the Internet resembles other so-called "process" addictions, in which a person is addicted to an activity or behavior (including gambling, shopping, or certain sexual behaviors) rather than a substance (mood-altering drugs, tobacco, food, etc.). Causes and symptoms Causes (Oleg Nikishin/Getty Images.

Example, a person might "surf the Web" to escape family conflict. Forbes Welcome. Thanks for coming to Forbes. 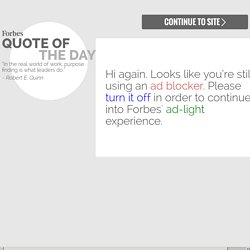 The Internet has made life a lot easier by making information more accessible to all and creating connections with different people around the world. 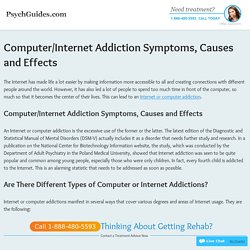 However, it has also led a lot of people to spend too much time in front of the computer, so much so that it becomes the center of their lives. Internet Addiction. Breaking News English ESL Lesson Plan on Internet Addiction. The New York Times has reported on a problem that many of us have but are not aware of – Internet addiction. 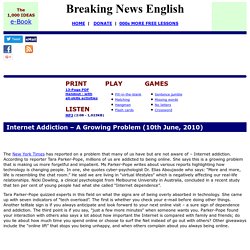 According to reporter Tara Parker-Pope, millions of us are addicted to being online. She says this is a growing problem that is making us more forgetful and impatient. Ms Parker-Pope writes about various reports highlighting how technology is changing people. In one, she quotes cyber-psychologist Dr. Elias Aboujaode who says: “More and more, life is resembling the chat room.” Tara Parker-Pope quizzed experts in this field on what the signs are of being overly absorbed in technology. 1. 2. Have a chat about the topics you liked. 3. 4. 5. 1. 2. 3. GAP FILL: Put the words into the gaps in the text. LISTENING – Listen and fill in the gaps. Internet Addiction Test (IAT) - NetAddiction. The Internet Addiction Test (IAT) is the first Validated measure of Internet Addiction described in the IAT Manual to measure Internet use in terms of mild, moderate, to several levels of addiction. 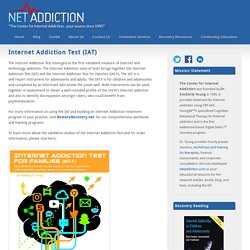 For more information on using the IAT and building an Internet Addiction treatment program in your practice, visit RestoreRecovery.net for our comprehensive workbook and training programs. Based upon the following five-point likert scale, select the response that best represents the frequency of the behavior described in the following 20-item questionnaire. 0 = Not Applicable1 = Rarely2 = Occasionally3 = Frequently4 = Often5 = Always ___How often do you find that you stay online longer than you intended? ___How often do you neglect household chores to spend more time online? Internet addiction disorder. Internet addiction disorder (IAD), now more commonly called problematic Internet use (PIU)[1] or compulsive Internet use (CIU).[2] Other overlapping terms include Internet overuse, problematic computer use or pathological computer use – and even iDisorder.[3] These terms avoid the word addiction and are not limited to any single cause, but only reflect a general statement about excessive computer use that interferes with daily life.[4] IAD was originally proposed as a disorder in a satirical hoax by Ivan Goldberg, M.D., in 1995,[5] though some later researchers have taken his essay seriously. 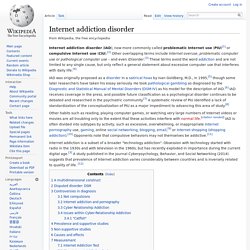 Other habits such as reading, playing computer games, or watching very large numbers of Internet videos or movies are all troubling only to the extent that these activities interfere with normal life. Internet addiction is a subset of a broader "technology addiction". §A multidimensional construct[edit] §Disputed disorder: DSM[edit] Jerald J.