13+ Fun Miniature Dioramas By Japanese Artist Who’s Been Creating Them Every Day For 5 Years. Bigger doesn't always mean better, as Japanese artist Tatsuya Tanaka proves with these tiny dioramas that he makes for his ongoing Miniature Calendar project. 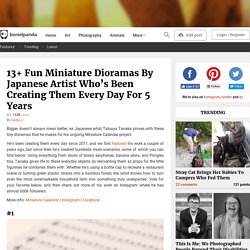 Show Full Text He's been creating them every day since 2011, and we first featured his work a couple of years ago, but since then he's created hundreds more scenarios, some of which you can find below. Using everything from slices of bread, earphones, banana skins, and Pringles tins, Tanaka gives life to these everyday objects by reinventing them as props for the little figurines he combines them with. Whether he's using a bottle cap to recreate a restaurant scene or turning green plastic straws into a bamboo forest, the artist knows how to turn even the most unremarkable household item into something truly unexpected.

Vote for your favorite below, and then check out more of his work on Instagram where he has almost 600k followers. 10+ Incredible Photos You Won’t Believe Are Not Photoshopped. Using Paper Cutouts To Turn Famous Landmarks Into Art (10+ New Pics) Londoner Rich 'Paperboyo' McCor (previously here and here) has already transformed Paris's Arc de Triomphe into a LEGO man and turned London's 02/Millennium Dome into a delicious-looking cake. 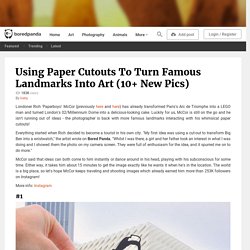 Luckily for us, McCor is still on the go and he isn't running out of ideas - the photographer is back with more famous landmarks interacting with his whimsical paper cutouts! Show Full Text Everything started when Rich decided to become a tourist in his own city. "My first idea was using a cut-out to transform Big Ben into a wristwatch," the artist wrote on Bored Panda. "Whilst I was there, a girl and her father took an interest in what I was doing and I showed them the photo on my camera screen.

McCor said that ideas can both come to him instantly or dance around in his head, playing with his subconscious for some time. These Pairs Of Photos Become Very Dirty Only When You Combine Them In Your Head (NSFW) French photographer Sacha Goldberger is raising a lot more than just eyebrows with his latest photo series. 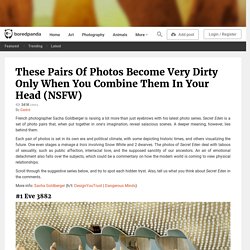 Secret Eden is a set of photo pairs that, when put together in one's imagination, reveal salacious scenes. A deeper meaning, however, lies behind them. Show Full Text Each pair of photos is set in its own era and political climate, with some depicting historic times, and others visualizing the future. One even stages a ménage à trois involving Snow White and 2 dwarves. Scroll through the suggestive series below, and try to spot each hidden tryst. 4.5 Million Baby Blue Eyes In Hitachi Seaside Park In Japan. Believe it or not, these fairy tale-like fields are not digital images of our most vivid dreams, they are real photos taken at a park located in Hitashi, Japan. 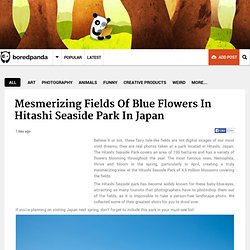 The Hitashi Seaside Park covers an area of 190 hectares and has a variety of flowers blooming throughout the year. The most famous ones, Nemophila, thrive and bloom in the spring, particularly in April, creating a truly mesmerizing view at the Hitashi Seaside Park of 4.5 million blossoms covering the fields. The Hitashi Seaside park has become widely known for these baby-blue-eyes, attracting so many tourists that photographers have to photoshop them out of the fields, as it is impossible to take a person-free landscape photo. We collected some of their greatest shots for you to drool over. If you’re planning on visiting Japan next spring, don’t forget to include this park in your must-see list! Post The Most Beautiful Steps From Around The World. Do You Have Pareidolia? Post Faces In Everyday Objects. Let's see who has the worst case of pareidolia - post photos of everyday objects with faces. 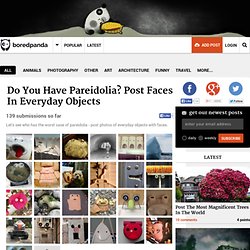 Show 114 more Recent submissions to this list O_o Mr. Robot Evil Pepper-viper Happy Printing ! Winky The Inukshuk ... Meh Drag Image Tip: image width should be at least 600px Select File Ooops! Tom This lazy panda forgot to write something about itself. Share The Most Beautiful Pictures Of Doors From Around The World. 16 Oldest Surviving Examples Of Everyday Things. We enjoy quite a few unprecedented technologies today, but much more of the stuff that we use has been around for ages. 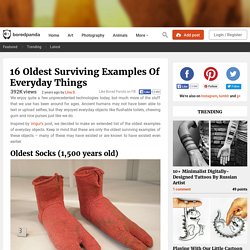 Ancient humans may not have been able to text or upload selfies, but they enjoyed everyday objects like flushable toilets, chewing gum and nice purses just like we do. Inspired by imgur’s post, we decided to make an extended list of the oldest examples of everyday objects. Keep in mind that these are only the oldest surviving examples of these objects – many of these may have existed or are known to have existed even earlier. Oldest Socks (1,500 years old) Thanks for sharing! 3x per week 30,000,000+ monthly readers Error sending email These Egyptian wool socks, designed to go with sandals, were knitted between 300 and 499 AD and found in the 19th century. Oldest Written Recipe (5,000 years old) “A Sumerian Beer recipe dating back to 3000 BC. Post The Most Wonderful Castles From Around The World.