Effective communication techniques are so important. Citing some of the foremost experts in the world 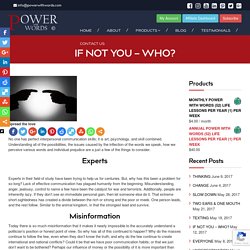 Understanding all of the possibilities, the issues caused by the inflection of the words we speak, how we perceive various words and individual prejudice are a just a few of the things to consider. Experts Experts in their field of study have been trying to help us for centuries. But, why has this been a problem for so long? Lack of effective communication has plagued humanity from the beginning. Misinformation Today there is so much misinformation that it makes it nearly impossible to the accurately understand a politician’s position or honest point of view.

Master Communicator It’s easy to become a master communicator with the right information and a little practice. Let’s forget about the global problems we are all facing for a moment, and think about what would be good for the average person right now. POWER with WORDS : POWER with WORDS. Our brains are made to think, and it is natural. 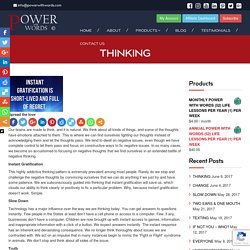 We think about all kinds of things, and some of the thoughts have emotions attached to them. This is where we can find ourselves fighting our thoughts instead of acknowledging them and let the thoughts pass. We tend to dwell on negative issues, even though we have complete control to let them pass and focus on constructive ways to fix negative issues. In so many cases, we become so accustomed to focusing on negative thoughts that we find ourselves in an extended battle of negative thinking. Instant Gratification. POWER with WORDS : POWER with WORDS. Why do so many people speak in a hurry, interrupt, and answer before a person has finished speaking? 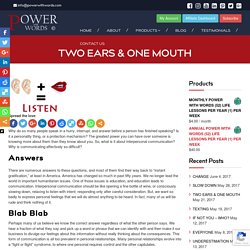 Is it a personality thing, or a protection mechanism? The greatest power you can have over someone is knowing more about them than they know about you. So, what is it about interpersonal communication? Why is communicating effectively so difficult? There are numerous answers to these questions, and most of them find their way back to “instant gratification,” at least in America. Blab Blab Perhaps many of us believe we know the correct answer regardless of what the other person says. Effective communication has been a major issue on a global basis for centuries. Experts With a little bit of education by experts, we can bridge this widening gap and learn to be more tolerant and understand the importance of listening. POWER with WORDS : POWER with WORDS.

Anger – Part 3 Definition: Anger is a strong feeling of annoyance, displeasure, or hostility that has the potential of becoming addictive.. 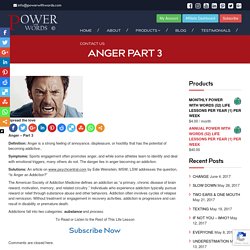 Symptoms: Sports engagement often promotes anger, and while some athletes learn to identify and deal with emotional triggers, many others do not. The danger lies in anger becoming an addiction. Solutions: An article on www.psychcentral.com by Edie Weinstein, MSW, LSW addresses the question, “Is Anger an Addiction?” The American Society of Addiction Medicine defines an addiction as “a primary, chronic disease of brain reward, motivation, memory, and related circuitry.” 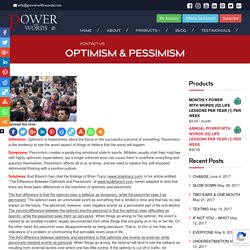 Pessimism is the tendency to see the worst aspect of things or believe that the worst will happen. Symptoms: Pessimism creates a paralyzing emotional state in sports. Athletes usually start their matches with highly optimistic expectations, but a single unforced error can cause them to overthink everything and question themselves. Pessimism affects all of us at times, and we need to replace this self-imposed, detrimental thinking with a positive outlook. Solutions: Bud Bilanich has cited the findings of Brian Tracy (www.briantracy.com) in his article entitled, “The Difference Between Optimists and Pessimists” at www.budbilanich.com, herein adapted to note that there are three basic differences in the reactions of optimists and pessimists.

The first difference is that the optimist sees a setback as temporary, while the pessimist sees it as permanent. POWER with WORDS : POWER with WORDS. What is it about change that becomes very difficult for people to accept? 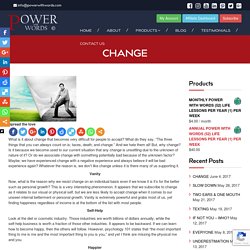 What do they say, “The three things that you can always count on is; taxes, death, and change.” And we hate them all! But, why change? Is it because we become used to our current situation that any change is unsettling due to the unknown of nature of it? Or do we associate change with something potentially bad because of the unknown factor? Vanity Now, what is the reason why we resist change on an individual basis even if we know it is it’s for the better such as personal growth? Self-Help Look at the diet or cosmetic industry. POWER with WORDS : POWER with WORDS. Definition: Prejudice is a preconceived, unfavorable opinion about someone or something, formed with inadequate knowledge, thought, or reason. 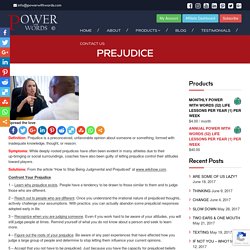 Symptoms: While deeply-rooted prejudices have often been evident in many athletes due to their up-bringing or social surroundings, coaches have also been guilty of letting prejudice control their attitudes toward players. Solutions: From the article “How to Stop Being Judgmental and Prejudiced” at www.wikihow.com. Confront Your Prejudice. POWER with WORDS : POWER with WORDS.

Definition: Passive-aggressiveness is the indirect expression of hostility. 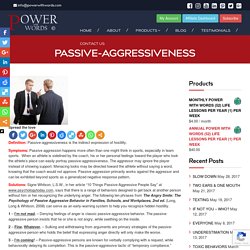 Symptoms: Passive aggression happens more often than one might think in sports, especially in team sports. When an athlete is sidelined by the coach, his or her personal feelings toward the player who took the athlete’s place can easily portray passive-aggressiveness. The aggressor may ignore the player instead of showing support. Menacing looks may be directed toward the athlete without saying a word, knowing that the coach would not approve.

Passive aggression primarily works against the aggressor and can be exhibited beyond sports as a generalized negative response pattern. POWER with WORDS : POWER with WORDS. Definition: Closed-mindedness is the state of being unwilling to consider other ideas or opinions. 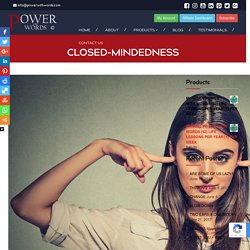 Symptoms: In sports, the nonprofessional athlete who begins to enjoy some measure of success may begin to think, “My way is the right way.” When such closed-mindedness settles in, he or she needs to be reminded that change will always be necessary and that open-mindedness is the desirable attribute. Solutions: Steve Pavlina answers some key questions in his article “Dealing with Close-Mindedness” at www.stevepavlina.com. How can you intelligently deal with people who are closed-minded, totally stubborn in their beliefs, and unreceptive to new ideas? Perhaps you feel certain you’re right and they’re wrong, but you can’t seem to convince them to see things your way. When you encounter a person who is very closed-minded, you’ll often find yourself becoming resistant to the other person’s position. POWER with WORDS : POWER with WORDS.

You learned how to speak your language before you can remember. 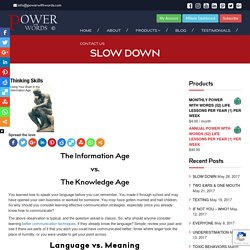 You made it through school and may have opened your own business or worked for someone. You may have gotten married and had children. So why should you consider learning effective communication strategies, especially since you already know how to communicate? The above observation is typical, and the question asked is classic. So, why should anyone consider learning better communication techniques, if they already know the language?

Effective communication is a learned activity after you have learned the language and not something you learn as you are growing up. Keys to Success If any of the questions above trigger a yes, then learning effective communication is extremely important. Misinformation. POWER with WORDS : POWER with WORDS. Definition: Composure is the state of being calm and in control of oneself. Symptoms: In sports, an athlete with very high-performance expectations is likely to become easily frustrated and lose control emotionally when he or she believes that those expectations are not being met. Identifying the mental breakdowns that cause such a loss of composure is essential. Solutions: In his article, “The Key to Composure in Sports” at www.sportpsychologytoday.com, Mike Edger identifies the top five mental errors that can affect composure.

Perfectionism – Expecting to perform perfectly causes a loss of composure because you become frustrated and then focus too much on your errors instead of on the tasks needed to perform well.Social approval – Worrying too much about how you think others may judge you distracts from your performance. POWER with WORDS : POWER with WORDS. Definition: Denial is the refusal to accept the truth or reality regarding someone or something.

Symptoms: By its very nature, participation in sports invites denial. Players quickly engage in it when they don’t do something perfectly or at least correctly. “I can’t believe I hit that shot” is a very typical response. Whether the denial is mental or verbal, it indicates that the athlete needs to accept the reality of shortcomings and then focus on the next right move in order to recover faster and play better. POWER with WORDS : POWER with WORDS. Definition: Emotions are strong feelings deriving from one’s circumstances, mood, or relationships. Symptoms: Sports are filled with emotion. Football and boxing, for example, require such emotional thinking that they can devolve into hatred. In soccer, even the emotions of the fans often become dangerous.

Most sports, however, require a certain amount of strictly personal emotional involvement to inspire the athlete’s peak performance. Uncontrolled emotions can readily cause poor judgment and tightened muscles, thus making optimum play in the zone impossible. Solutions: Susan Krauss Whitbourne, Ph.D., declares in her article, “5 Ways to Get Your Unwanted Emotions Under Control,” at www.psychologytoday.com, that your ability to regulate your emotions affects how you are perceived by the people around you. Select the situation.

POWER with WORDS : POWER with WORDS. Definition: Mental strength is a measure of individual resilience and confidence that may predict success in sports, education, and the workplace. Symptoms: All athletes must draw on their mental strength to play at their peak performance. Getting into the “Zone,” at will, requires an understanding of what constitutes intense mental focus. This mental capacity is vital in today’s competitive environment, both on and off the court or field. Solutions: Mental toughness is characterized by the ability to push through difficult (and even painful) situations while maintaining peak performance. For entrepreneurs and business owners, it means having the grit you need to get through the hard times and the presence of mind to avoid getting caught up in the good times.

Develop emotional awareness – To be mentally tough, you need to become. POWER with WORDS : POWER with WORDS. Definition: Optimism is hopefulness about the future or the successful outcome of something. Pessimism is the tendency to see the worst aspect of things or believe that the worst will happen. POWER with WORDS : POWER with WORDS. POWER with WORDS : POWER with WORDS. Definition: Predictability is the attribute of a state of mind, pattern of behavior, or course of action that makes it possible to know in advance what to expect. Symptoms: In sports, being able to predict an opponent’s moves comes with lots of keen observation. Professional teams review film after film of their opponents to take note of how they have reacted under various circumstances in the past. Understanding the mindset of an opponent is not an exacting science but is rather the art of predicting that which seems most probable. Solutions: After being in the grip of bipolar disorder, psychosis, anxiety, and disorder eating, Victoria Maxwell faced her mental illness head on and began her journey toward awareness and recovery.