Posteeze is the best online digital magazine. You can find all latest news and updates in one place.

Sony Xperia Touch : Surfaces Comes Alive. - Posteeze. Technology is taking turns today faster than what it used to a decade ago and with it brings an enormous amount of possibilities that make way for the exciting gadgets and devices of sheer brilliance. 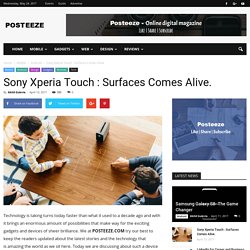 We at POSTEEZE.COM try our best to keep the readers updated about the latest stories and the technology that is amazing the world as we sit here. Today we are discussing about such a device which is a revolution in itself, a design and mark that is meant to change the world of mobile computing. Ever see Tony Stark project his device screen to surfaces in the Iron Man movies and wonder if such a gadget would be invented to allow the user to project the device screen on any surface and still be able to operate it? BHIM-Aadhaar Pay : It's Time To Go Cashless !! - Posteeze. Ever since the demonetization of bank notes on 8th November 2016, Prime Minister Narendra Modi has been emphasizing on making India a digital and cashless nation. 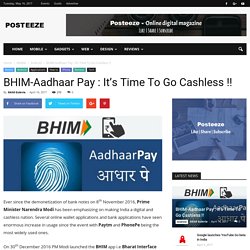 Several online wallet applications and bank applications have seen enormous increase in usage since the event with Paytm and PhonePe being the most widely used ones. On 30th December 2016 PM Modi launched the BHIM app i.e Bharat Interface for Money which aimed at unifying Indian citizens in terms of online cashless payments. Developed by the National Payments Corporation (NPC), the app saw a significant growth in the number of users which has reached a mark of 125 lakh Indian citizens as of March 2017. The app comes in 12 languages which are English, Hindi, Punjabi, Malayalam, Tamil, Telugu, Marathi, Gujarati, Kannada, Bengali, Assamese and Odia. Here’s a quick guide to how the BHIM Aadhaar Pay app works: The Prime Minister on Friday also launched two new offers to reward BHIM users which are: Thanks POSTEEZE.COM !! Top 10 Tycoons That Changed Indian Economy !! - Posteeze. India is one of the fastest growing economies in the world and this can be attributed to the large population that it has. 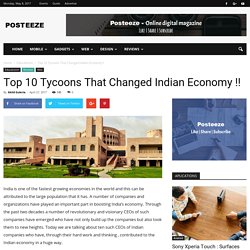 A number of companies and organizations have played an important part in boosting India’s economy. Through the past two decades a number of revolutionary and visionary CEOs of such companies have emerged who have not only build up the companies but also took them to new heights. Today we are talking about ten such CEOs of Indian companies who have, through their hard work and thinking , contributed to the Indian economy in a huge way. 1. Mukesh Ambani : Mr. Top Five Indian CEOs Ruling The World !! - Posteeze. In popular belief, India is perhaps known best for its culture, spices, music and Bollywood films, but in the past few years another product is yet becoming a winner i.e. 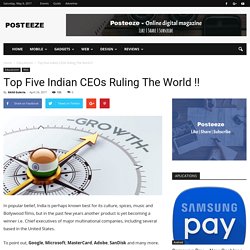 Chief executives of major multinational companies, including several based in the United States. To point out, Google, Microsoft, MasterCard, Adobe, SanDisk and many more. What do these companies have in common? They are all run by India born CEOs, a generation of talented students who left their home and rose to the top of some of the world’s largest companies. Today there are more Indian CEOs than any other nationality after Americans, contributing to a total of 30 percent of the world. 1. He worked for McKinsey & Company in management during his pre-Google days. In 2015, Sundar was announced the CEO by then CEO Larry Page and the rest as we know is history. 2. When he joined Microsoft, he headed many important projects including Microsoft’s shift to cloud computing and the development of Windows NT. Top 10 Business Schools of India. Finding the right B-School among the most reputed of those in the country is another challenge that MBA aspirants encounter. 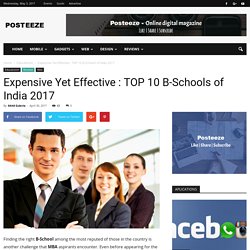 Even before appearing for the exams it is utmost for the aspirants to know about their dream B-School and what is required of them to secure a seat in that particular B-School. Therefore, we at POSTEEZE.COM have complied a comprehensive list of India’s top 10 B-Schools based on the latest rankings of 2017. Starting from #1 to #10, all these B-Schools are the best in country and we have made it easy for you to aspire your favorite one.