Desigual's Snapchat Filter Make-Up Looks Are The Most Talked About Thing From NYFW. Instagram Whether you’re an avid fashion month follower, or you casually peruse the talking points as they filter onto the internet, you’ve probably seen the pictures — the most unexpected look of NYFW so far (it is only Day 2 after all, people) has got to be Desigual’s Snapchat filters. 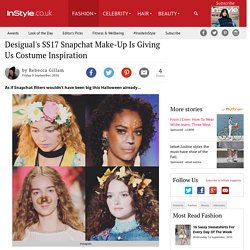 With the help of MAC make-up artists, models were sent down the runway at its SS17 show with the filters actually painted on their faces. So, instead of the filters being magically (or with the help of some kind of unfathomable augmented-reality technology) superimposed on their face, they were done with a normal make-up kit. Sort of like that face paint you had done at village fetes when you were a child, yes — it’s come full circle. Read: The celebrity Snapchats you need to follow Though it's unexpected from the Madrid-based brand, not known particularly for its tech-savviness or wit, it's fitting.

This will come as welcome face-paint-spiration for everyone who hates dressing up. Stylish guide to London. Ralph Lauren goes for cowboy chic in a traffic-stopping show. Reading the business pages, it would be easy to conclude that it’s shaky times at Ralph Lauren, with sales down 11% in North America in the first quarter of 2016, 8% of its workforce cut this year and 50 stores closing. 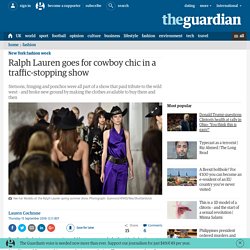 There was somewhat of a different impression on Wednesday evening at New York fashion week. Lauren still has the clout to close a block of the Upper East Side’s Madison Avenue to stage not one but two fashion shows in a temporary structure erected outside the brand’s flagship store. The concept behind the show was equally confident. With See Now Buy Now in full effect in New York, the game is to see how it can do it bigger, better and bolder.

At Lauren’s show, everything seen could be bought immediately. Accordingly, the show began with two suited young men unlocking the store doors. It was all targeted at the women in the surrounding area. Lauren, now 76, has a lot of good will in his native city. New York Fashion Week Photo Diary Gallery. CULTURE LENS: FERRAGAMO Museum - Art in Fashion. We have often discussed the artistry of the House of Ferragamo here at Furinsider. 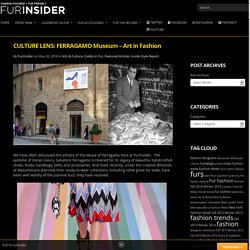 The epitome of Italian luxury, Salvatore Ferragamo is revered for its legacy of beautiful handcrafted shoes, boots, handbags, belts and accessories. And more recently, under the creative direction of Massimiliano Giornetti their ready-to-wear collections, including some great fur looks, have been well worthy of the positive buzz they have received. Salvatore Ferragamo Fall 2016 Shoes Massimiliano Giornetti was with Ferragamo for 16 years Fall 2011/ Winter 2012 Fall 2015/ Winter 2016 Fall 2014 Fall 2015 Now the Ferragamo Foundation and the Salvatore Ferragamo Museum will celebrate the artistic interests and talents of the company founder with a new exhibition titled “Across Art and Fashion.”

The Salvatore Ferragamo museum in Florence is not your average fashion museum, but a permanent tribute to Ferragamo’s legacy. Fall 2016 Ad Campaigns We Love. It’s official. 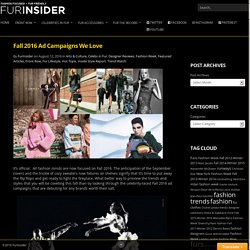 All fashion minds are now focused on Fall 2016. The anticipation of the September covers and the trickle of cozy sweaters now fixtures on shelves signify that it’s time to put away the flip flops and get ready to light the fireplace. What better way to preview the trends and styles that you will be coveting this fall than by looking through the celebrity-laced Fall 2016 ad campaigns that are debuting for any brands worth their salt. Balmain’s theatrical Fall/Winter 2016-2017 ad campaign starring Kanye West and Joan Smalls This picture perfectly describes how we feel about summer coming to an end. Even though distribution mediums may have changed, from traditional print and magazine page ads to a more digital format, the labor of love that brings an ad campaign to life hasn’t.

You don’t get any more iconic than Kate Moss for Alberta Ferretti’s fall campaign. Fendi went with “it girl” Kendall Jennar again for their Fall 2016 campaign.